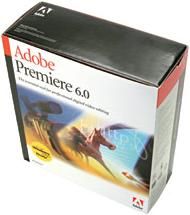 At press time, digitizer/capture board manufacturers were just beginning to ship with Adobe Premiere 6.0, so the jury was still out on compatibility across that market. The list of video camera drivers supported within Premiere is very impressive, and will be more so if they all prove reliable.


The biggest nod in the audio direction is the addition of a Mix window. Finally, there are onboard VU meters and channel faders that have automation capabilities.

Single track editing is a new and welcome addition to 6.0. Keyframes, filters and compositing tools on the video end have brought Premiere 6.0 a little closer to the shining star of its adopted COSA sibling, After Effects.
As in After Effects, if you have a file from another Adobe program like Photoshop in your project, you can edit that document in the program in which it was created and the file will be updated automatically in the Premiere 6.0 project. Unlike After Effects and many other editors, however, Premiere 6.0 does not allow more than one sequence per project. This is a real drawback when you need multiple versions of the same piece.

We installed Premiere 6.0 in an HP Pavillion with a P4 1.5GHz and a built-in OHCI-compliant FireWire card. For DV device control testing we batch captured footage from three different cameras.


We used two Mini DVs (Panasonic AG-DV1000 and JVC DVL-9800) and a Digital8 (Hitachi VM864LA). The Panasonic was by far the hardiest of the lot when it came to device communication performance. The driver quickly brought the camera online, and Premiere 6.0 swiftly acquired its shots.


The JVC did not come online until we restarted, with the camera off, and relaunched Premiere 6.0. Then, after two or three attempts at establishing control in the settings, the JVC came alive and responded quite well in searching out its batch list.


The Hitachi took some fussing with in order to get the driver to see the camera. When it did respond, Premiere 6.0 began to hang a bit in its response. Windows froze several times and when an action was taken, it took an uncomfortable moment or two to respond. Eventually, we received the captured list. We then tested the editing environment.

Out on the Track

Using the single track mode of the edit interface, we began laying shots in the timeline. When we trimmed our footage and added filters and transitions, we found the much improved edit functions to be very intuitive and easy to learn since we were already familiar with Premiere.


Audio mixing with the automated Mix window was a timesaver and easy to get the hang of. During playback we adjusted levels and saw the result on the timeline.


Premiere 6.0 is packed full of many more features than we have the space to include. We believe this upgrade is a must for anyone currently using Premiere and that there has never been a better version for users at any level to begin an editing relationship than with Adobe Premiere 6.0.