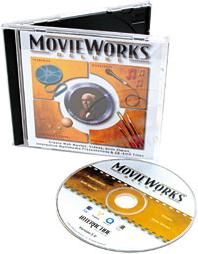 MovieWorks brings its multimedia production tool to the Windows platform with its latest version, Deluxe 5.0. In our last review of the software (see Videomaker, September 2000), we noted that this software was targeted at producers of multimedia presentations. Like version 4.6, MovieWorks 5.0 continues in same tradition. Let’s take a look.

One of the recent changes in MovieWorks version 5.0 is that it now runs on Windows. This was a pure Mac product in the past, but now Windows users have the opportunity to join in the MovieWorks fun.

This program has a timeline interface that is akin to the likes of After Effects on a more simplistic scale, with many fun features that can initiate the novice into the world of 2D animation. Its timeline structure is very similar to AE, except that each object opens in its own window rather than opening in a list in the project window. We tested MovieWorks on a Mac (PowerBook 333MHz 192MB RAM) and a Windows 98 box (Pentium III 550MHz 128MB RAM). We accomplished both installations without incident, although we had to fiddle with some memory settings on the Mac to engage the sound program (more on this later).

MovieWorks 5.0’s video editor takes a timeline approach, but we found that it wasn’t as intuitive as Adobe Premiere or Apple Final Cut Pro. It still uses the same interface that it used in the past. Users have to open each video clip to trim its length, then bring it back to the MovieWorks menu to place it in the project. After trimming your clips you can quickly rearrange them, adding cuts and dissolves to your composition on the timeline. Rendering was manageable on both the Windows and the Mac machines we used to test the software.

MovieWorks 5.0 has plenty of predefined high and low bandwidth options for outputting QuickTime videos aimed at specific connection speeds for Web content. You can output the same piece twice, optimizing one version for 56k modem users and another for DSL users.

MovieWorks has a nice group of tools for multimedia production and is very good for editing a QuickTime video for the Web. Editing a long form video with the idea of putting it on tape is however not what MovieWorks is about, so use it for QuickTime and Web movies, multimedia presentations and slide shows and you’ll be happy with the result.

The animation portion of MovieWorks 5.0 is easy to put to use. However, this function is made for simple compositions and should not be expected to compete with expensive software packages that hang their hat on animation prowess.

The program uses a simple, frame-by-frame approach. You can set the key frames, the paths and the other important basics. The animations look fine, as long as you are expecting an uncomplicated, basic animation. Don’t expect to make Toy Story 3 with these tools. If you want a basic tool for making some animated text or making some screen elements move around, you’ll be pleased.

When testing MovieWorks Deluxe 5.0 on a Mac (a PowerBook 333MHz with 192MB RAM), we encountered a file size problem. When we opened a 29MB sound file, the program hung up. Only after changing the minimum memory partition from the suggested 4MB to 30MB did the problem go away and the file opened.

Although we had to partition more memory to work with larger sound files, we found the audio tools in version 5.0 have improved over earlier incarnations. It has basic features like echo, flange, reverse, fade-in and -out and silence. You can use these to massage your audio, but don’t expect great versatility in this modest price point package. Because the waveform monitors were redrawn irregularly and were generally hard to read, checking our levels was difficult. Making precise edits with the sound editor was tough because the program lacks an audio scrubbing control. These two shortcomings illustrate that audio is not MovieWorks’ strongest suit.

Interactive Solutions’ MovieWorks 5.0 is a good little product for making Web videos, slideshows and many other multimedia projects. It’s a great tool if you wish to spend no more than $150 on software and have a lot of Web work to do. But don’t count on it if you expected to be able to edit a longer video and put it back on tape. This just isn’t what MovieWorks is intended for.