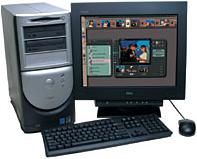 Critics used to mock computer turnkey systems because they practically required users to have a degree in computer science in order to get them working properly. There were cables to connect, software to configure and drivers to install. And eventually, when technical problems invariably arose, nobody took responsibility.

Targeting beginning to intermediate users, Dell is looking to capitalize on the growing video editing market. Although MGI’s VideoWave III is purely for beginners and actually out of date (VideoWave 4 is the current release), the Dell Dimension 8100 has all of the basic components to be a solid editing machine, especially if you upgrade to more robust editing software.

The model we received had a fast hard drive and a large, 19-inch monitor. And, as many companies are doing these days, Dell included both CD-RW and DVD drives, which make acquiring and distributing your video a snap. If you’re new to video editing or if you’re looking for the flexibility of a computer with editing capability, check out the new Dimension.

The Dimension 8100 that we received featured Intel’s newest processor, a 1.5 GHz Pentium 4, optimized for multimedia applications. Dell included 128MB of RAM, which can be expanded to 1GB. It also came with a 40GB, 7200 rpm hard drive that ensures you a nice and fast transfer rate.

And for our listening pleasure, this Dimension came with Altec Lansing THX Digital speakers that rock! They even have a remote control for convenient volume control. Dell also included a small microphone that is sufficient for simple voiceovers.

If the particulars of this system aren’t quite what you’re after, Dell will customize a system for you from high quality components. If you want a bigger monitor, less CPU speed or more hard-drive space, you can specify it all online.

Not only are computer turnkey systems getting faster, bigger and better, but they’re easier than ever to use. The Dimension 8100 set up in less than 10 minutes. All of the necessary software was pre-installed. After the simple hookup, we were ready to start editing.

We found the bundled editing software, MGI’s VideoWave III, easy to learn and use. This program should remove the intimidation from editing video and introduce many newcomers to its joys. Of course, Microsoft’s Movie Maker editing software was also pre-installed, as it is now standard on all Windows Me systems. While these programs are adequate for simple projects, they don’t provide much for any serious effort. We were able to install Adobe Premiere 6.0 on this machine easily, however, and found through editing a short video that it supported this full-featured software well.

In addition to editing video, you could use the Dimension to type a letter, file your taxes, access the Internet and balance your checkbook. Dell sweetened the Dimension package nicely by including a number of leading software applications like Microsoft Word, Works and Money and other convenient accessory applications like fax/modem software, WinDVD, MusicMatch and Norton AntiVirus.

Although Dell didn’t include convenient front panel ports, they did incorporate three FireWire ports and two USB ports on the back for capturing digital video. There are no analog video ports. To make use of analog footage, you’d need an analog-DV converter in one form or another.

We plugged a Mini DV camcorder into one of the ports in the back and opened up VideoWave III to start our capture. For our tests we captured about 10 minutes of video, copied a song from a CD and quickly began editing our piece. After trimming our clips and applying the appropriate transitions, we were ready to render our music montage and output it. We first produced a 720×480 version that we wanted to print to tape. The 2 1/2-minute piece rendered quickly. We got our camcorder ready again and output our project back to Mini DV tape. We were pleased with the quality and found no dropped frames. We then went back to our project and re-rendered it as a 360×240 .AVI file so that we could burn it to CD.

This succeeded even quicker and we saved it under a new name on the hard drive. We then opened Direct CD and went through the brief setup and we output it to the CD in the CD-RW drive. In a couple minutes, we had our video on CD.

It’s hard not to be seduced by the power, flexibility and versatility that computer editing systems offer. The Dell Dimension is a prime example. You can customize it to better fit your needs and budget and it’s got all the essential elements to capture, edit, produce and distribute your video creations. Buy a CD label creator and you’ve got your own video production studio.

Although the bundled editing software is limited, the Dimension 8100 hardware is attractive for beginners to intermediate video editors who are looking to capture and create digital video. By upgrading to a more powerful editing application on this machine, users can have even greater control over their projects. The Dimension 8100 is perfect for home videos, Internet productions and CD-ROM distribution.

The Dimension 8100 is ideal for beginning to intermediate users who want a variety of ways to output their video, either by tape, Internet or CD. With an upgrade in editing software, this will be a real performer.