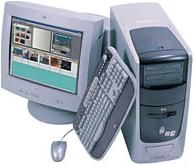 
The term turnkey editing computer is quickly becoming redundant. Many consumer-oriented computers are fully loaded editing systems. Microsoft’s simple editing program MovieMaker now ships with all Windows Me operating systems and both USB and FireWire ports are becoming a standard feature on computers. We predict that it won’t be long before all computers will ship with the necessary hardware and software to import, edit and export finished video back to tape, the Internet or disk.

Although this trend is gaining momentum, we were blown away when we received Hewlett-Packard’s latest multimedia powerhouse in our editorial office. This behemoth boasts a 1.5GHz, Pentium IV processor, 80 gigs of hard drive space, 256MB RAM, a 19-inch monitor, a DVD-player, a CD-ROM burner, surround sound and Pinnacle’s Studio DV simple video editing software.

It’s a monster aimed at the power-hungry video-editing neophyte. However, with a few tweaks and an upgrade in editing software, intermediate and advanced users can have a field day with this baby.

No, it’s not Godzilla, but with its gargantuan specs, this beast has some brawn. The HP9720 features Intel’s latest Pentium IV 1.5GHz processor that’s designed to optimize multimedia and Web performance. Its 80GB hard drive can store about six hours of full-screen, full-motion video. And once you’ve captured all of that footage, HP loaded a whopping 256MB of RAM to make sure you can load your project onto the timeline.

The 9720 is a paragon of multimedia versatility. We’re hard pressed to think of something you can’t do with this colossal computer. It’s got a CD-RW burner for output of both audio and video productions and HP included a DVD player as well. This is a great feature since the DVD player can also play CD-ROMs, which makes for easy CD copying. And when you’re ready to capture music or sound effects for your projects, HP’s MusicMatch Jukebox makes copying CD content to your hard drive quick and painless. And the Polk Audio sound system complete with four speakers and woofer make for an awesome sound.

We captured about an hour’s worth of full-frame, full-motion video to the hard drive and barely made a dent in its capacity. We then loaded about 20 minutes worth of clips to our timeline and began editing. The 1.5GHz processor ran smoothly and quickly considering how much video we had on our timeline.

We trimmed our project down to 10 minutes and were ready to capture some music. We went to the MusicMatch application and copied 13 songs from a CD in about five minutes. We then went back to Studio DV and imported two of the songs and added them throughout timeline. We adjusted the volume levels and then rendered the 720X480, 30fps project. It took less than 15 minutes to render this 1.8GB .avi file. To create a video for CD, we went back to our timeline, trimmed down to about six minutes and rendered a 360X240, 30fps .avi file, which took considerably less time and about 500MB of space. Perfect for our CD-ROM. We opened Easy CD Creator 4 and within minutes, we had ourselves a Video CD.

With this editing system, beginners and intermediate video hobbyists will have the power to create and distribute their videos in a dizzying array of formats and media. From tape to CD to the Internet, those who aspire to a larger audience can bypass Hollywood and create, edit, produce and distribute high-quality productions. It’s no longer a question of, "Gosh, if only I had this or that piece of software or equipment." With the HP 9720, you have a virtual production studio capable of producing extensive video and multimedia projects.