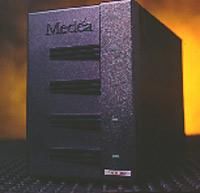 RAID Power for the Casablanca

The DraCo Casablanca is a self-contained video editing appliance. You buy the black box, hook your source deck and monitor to it, and you are ready to jump into nonlinear editing. In the past one of the Casablanca’s limitations was finite storage space. Original Casablaca’s shipped with two, four, six or nine gigabytes of available storage. While 9GB was a lot of space two years ago, users have become hungry for more. DraCo has since released 12 and 18 gigabyte drives, satisfying space-hungry users. And now, (as if 18 gigs weren’t enough) DraCo has teamed up with Medea to create the VideoRAID Casablanca, available in 26, 51 and 67 gigabyte arrays.

The VideoRAID, as you can guess by the name, is a RAID device for the Casablanca. RAID stands for Redundant Array of Independent Disks. Other RAID systems, like the ones that computer network servers use, are designed so that if any one hard drive fails you won’t lose data. A RAID for video is almost always called RAID Level 0. This means that disks in the RAID all act as one fast drive, with the RAID controller splitting and reforming the data so that it can get to each drive equally.

Installing the VideoRAID for Casablanca is pretty easy. The first step is to check that the SCSI ID on the VideoRAID is set to zero. Then plug the RAID in to the external SCSI port on the Casablanca. To use the RAID you’ll need to remove your existing hard drive (the Casablanca will only recognize one or the other). Lastly, install the Casablanca software onto the RAID. By pulling the old hard drive in the Casablanca, and installing the RAID, you are able to have two separate projects running on your machine which is a great benefit for those who work on multiple projects. How? You can put a short project on the existing hard drive, and a larger project on the RAID. Whenever you need to switch programs, simply unplug the RAID and plug in the regular hard drive or vice-versa.

How does the VideoRAID get so much performance? It uses what Medea calls Zone Striping Technology (ZST). ZST has pairs of discs that mirror each other. As the head of one hard disc is on the outside of the platter, it is on the inside part of the platter on the other disc. This way, the VideoRAID can achieve the high sustained data transfer rate. Of course that is with two discs. The unit we tested had four. And with all four discs acting together, it is one blazingly fast storage device.


You may wonder why such speed is necessary, especially when you consider that the maximum data rate achievable by the Casablanca is less than 1/4 of the speed achievable by this VideoRAID. The sheer volume of storage available on the unit is certainly a big plus, but you can get an awful lot of video on a single 18GB SCSI hard drive these days, and for considerably less than the price of this unit. Is the VideoRAID Casablanca an exercise in overkill? Perhaps. Maybe the Casablanca will someday upgrade to the point where such power is necessary, but for now, it’s a bit much.

The immense storage capacity is useful, but the speed is far more than the Casablanca needs.