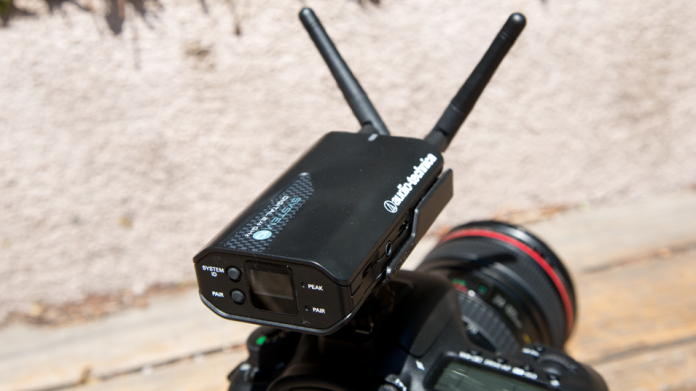 The ATW-1701/L is a member of Audio-Technica’s System 10 family of wireless microphones. There are a total of 19 configurations that mix and match various mics and receiver types. Mics include handheld, lavalier, two headset variations and a guitar configuration. Receiver variations include rack mount, stackable and a portable unit that mounts on a camera.

Audio-Technica’s System 10 captures audio at 24-bit with a 48 kHz sample rate — offering the potential for very high quality audio. Unlike some lower cost systems, this one is 100% digital and operates in the UHF (2.4 GHz) frequency band as opposed to the less desirable VHF band.

Let’s take a close look at Audio-Technica’s ATW-1701/L configuration, which ships with a lavalier mic, wireless transmitter and a lightweight portable receiver designed to mount atop a camera.

The small, black transmitter pack clips to clothing or a belt. The controls are simple. Press and hold the power button to energize the unit via two AA batteries. A small display shows battery strength; the power light flashes when batteries are near depletion. The power light is rather dim, rendering it difficult to see in bright situations.

The ATW-1701/L transmitter offers a mute button that avoids embarrassing situations like when an accidental live mic picks up the voice of a bathroom-bound host berating the director. Awkward. There are many examples of this — Google it for a good laugh.

Videographers often fear a talent-operated mute function. Why? Technicians want to have as much control as possible. Giving talent the ability to mute their mic opens up the possibility of the mic remaining in mute when the “on air” light lights up — not good.

Unlike some lower cost systems, this one is 100% digital and operates in the UHF (2.4 GHz) frequency band as opposed to the less desirable VHF band.

Fortunately, the ATW-1701/L offers the ability to disable the mute feature. The talent can still turn off the mic, but thankfully the audio engineer can see via the receiver’s display if the mic is off. The only way to tell if the mic is on mute is the sound of silence.

A small display on the transmitter shows users which of the eight channels are active — Audio-Technica calls this the “system ID.” Inside the transmitter’s battery compartment is a tiny screwdriver for adjusting a micro audio level control; a handy peak light on the receiver warns if levels are too high.

The pleasant-looking black lavalier offers an omnidirectional pickup pattern. The cleverly designed attaching clip pivots to accommodate different types of clothing. The mic attaches to the transmitter through a sturdy, quick-release locking connector.

A slide-on clip configures the receiver for mount atop a camera — either DSLR or camcorder. Remove the clip and the small receiver will sit on any flat surface. Power comes from an internal lithium-ion battery. The internal battery gets charged via a USB cable connected to the AC power supply. The power supply has the intelligence to automatically accommodate various global power systems — a nice touch for the globetrotting videographer.

The receiver offers two 1/8-inch (3.5 mm) analog audio output ports; one is for delivery of audio to the recording device, which is typically the camera. The other port allows operators to monitor the mic with headphones. A clever recessed volume control avoids unwanted changes to headphone levels. It would be great if the USB cable could also carry digital audio for recording directly to a computer or other digital device — unfortunately it doesn’t.

Dual antennas attach with threads to the receiver. A small display informs RF signal level, system ID and battery levels of both transmitter and receiver. A three-position output attenuation switch offers the ability to reduce output levels to accommodate the needs of specific recording equipment.

System 10 operates in the 2.4 GHz ISM band shared with cordless phones, wireless computer networks, Bluetooth and microwave ovens. Audio-Technica recommends keeping the receiving antennas away from these noise sources and specifies 30' (9 m) as the minimum distance to Wi-Fi access points.

Pressing a button on both transmitter and receiver pairs the transmitting and receiving channels. An indicator light confirms when pairing is complete. Each of the eight channels actually has two frequencies that the system can seamlessly switch between when detecting signal degradation.

A handy multi-pairing function allows a single receiver’s use with a series of mics. For example, a host can do the first part of a presentation with a lavalier, take a break and come back with a headset; the system will automatically pair the headset as soon as the lavalier is turned off.

For testing purposes, a Zoom H2n recorded the analog output of the receiver via the supplied cable. Recordings were carefully analyzed for audio quality, dropouts and interference. The ATW-1701/L performed admirably with no interference or dropouts and audio that was clean and accurate.

A test on an empty football field showed that the mic was capable of at least 300 feet of unobstructed travel. A windscreen — not included in the package — would improve outdoor audio quality. An indoor test in a wood-framed home with a Wi-Fi access point showed that the ATW-1701/L is capable of overcoming wall obstructions and ignoring potential interference sources.

A more challenging test was conducted in a college building made of steel and concrete; the building had Wi-Fi access points, computer labs and busy students using laptops and cell phones. The ATW-1701/L performed commendably even with several walls obstructing the signal.

Audio-Technica’s System 10 offers an affordable and portable system with many of the same features of units costing much more. A quick search on the web found units selling for significantly less than the manufacturer suggested retail price. If you are looking for an affordable wireless system, or to upgrade an analog VHF system, the ATW-1701/L is worthy of a look.