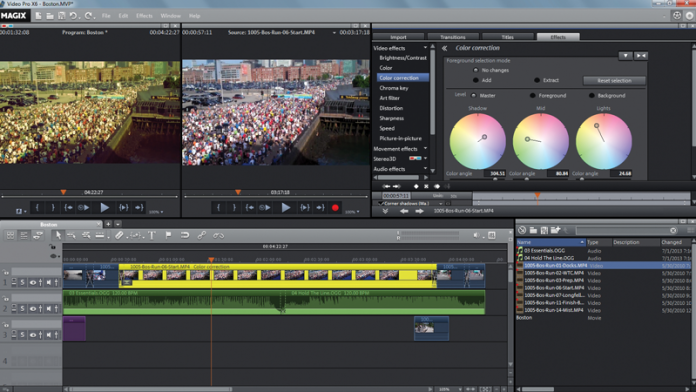 You may know MAGIX in the U.S. for its broad selection of consumer software for movie and music creation, photo and graphic design, and website creation. From a broader view, MAGIX has branches across North America and Europe, and is the multimedia software leader in Germany.

MAGIX positions Video Pro X6 as a pro level video editing tool at $400. It's a significant step up from MAGIX Movie Edit Pro and other consumer video editing tools, but with a traditional interface that should be familiar and comfortable when escaping the limitations of consumer tools. It's strong enough with 64-bit performance, tools and special effects to satisfy the needs of small production companies such as wedding videographers or smaller broadcast stations. You might think of it as occupying the middle ground between consumer and pro, something like Apple's now-discontinued Final Cut Express.

So how does Video Pro X6 stand up to pro-level expectations? The best way to find out is to take a tour through the application, highlighting its new and more distinctive features.

The big news for Video Pro X6 is the move to full native 64-bit support, with an optimized video engine for the Intel Core i7 and new H.264 and audio codecs and GPU acceleration for AVCHD export. With the additional 64-bit headroom, this version has also expanded support for Ultra HD and 4K including editing and export presets. It also adds two 64-bit effects plug-ins: proDAD Mercalli V2 to stabilize shaky videos and Red Giant Magic Bullet Quick Looks templates.

It’s strong enough to satisfy the needs of small production companies such as wedding videographers or smaller broadcast stations.

The most impressive new editing feature is support for nested sequences. You can choose an entire video sequence and embed it as a movie object in a project so it can be directly edited with effects and animations. The effects section has also been redesigned, and the important video effects have been GPU-optimized, including an HDR effect.

The first test of pro-level video tools is support for a broad range of devices and formats, from Ultra HD consumer cameras to professional cameras. Video Pro X6 stands up very well here, with support for standard SD and HD video formats including AVCHD (progressive), H.264, ProRes, DNxHD and up to professional video formats including DVCPRO and AVC-Intra (although these two require an additional fee of $70 for activation).

For getting your work done, Video Pro X6 provides a traditional editing interface design in a muted grey look. To help new users, it offers a simplified basic editing mode corresponding to Movie Edit Pro, with a drag-and-drop storyboard interface. The full, standard interface then provides dual program and source preview monitors above the timeline, with a media pool window for accessing content and effects and a project folder window to stash and prepare material.

The timeline also offers a scene overview mode for quick organization and rearranging, and a multicam mode with up to nine source tracks and automatic audio synchronization.

You can drag and drop to arrange content on the timeline, with options to move and group clips across one or all tracks. Other tools include time stretching and gap search to find areas of black frames, plus a built-in title editor with templates.

For audio, there are advanced options to automatically recognize tempo to help you adjust video cuts to the beat of a music track, a real-time multi-channel mixer that supports 5.1 surround sound, and a soundtrack mixer to automatically create soundtracks for various moods. And it supports editing MIDI tracks, with input and output device synchronization.

The media pool tabs provide access to a wide variety of transitions and effects. The collection also includes design elements including collages, backgrounds and intros/outros.

You can load, save and copy effects as your own presets. Then add keyframes to adjust the effect parameters over time, or use the effects curve overlaying the clip in the timeline to adjust and copy the animation. You also can apply effects masks per parameter to modulate the result of the effect based on the intensity of the mask.

While Video Pro X6 can import and edit a variety of professional camera formats, its export is focused on traditional file, device, and Web formats. It exports to the standard PC-based video editing file formats, including AVI, WMV (HD), QuickTime and MPEG variants to H.264.

It also transfers to devices including digital camcorders, VHS recorders and mobile devices. And it provides disc authoring for DVD, AVCHD and Blu-rays with menus and chapters. For playback online, you can upload directly to YouTube, Vimeo MAGIX Online Album and showfy.com, or output as a Flash video to embed on a website.

To save time in rendering, you can use the batch converter to export a collection of movies based on a preset.

After taking a tour of MAGIX Video Pro X6, you can see that it stands up well in providing professional video editing features and flexibility at a mid-range price. If you're stepping up from consumer tools, the interface is familiar and comfortable but without the limitations and restrictions. And with the 64-bit power, tools, effects and format support, it might be all the software you need if you're used to working with pro-level tools.

So download the 30-day free trial, and dive in to see how it works for you. You may discover more interesting bonuses, we haven't even mentioned the panoramic image creator or the travel route animator…