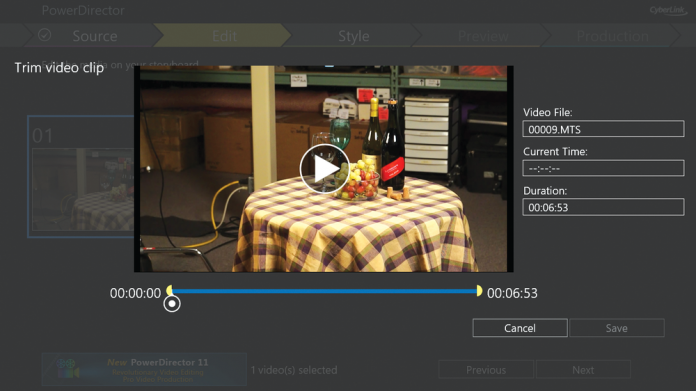 CyberLink has been making video and audio software since 1996 and is one of the original pioneers of consumer video editing software with their PowerDirector suite, now in its eleventh version. In the past 17 years, we’ve been steadily moving from big, heavy desktop computers and workstations to smaller and smaller notebooks and tablets that are more portable, yet nearly as powerful as their predecessors. The same is true for small camcorders, cell phones, and other video capture devices. CyberLink’s latest version of PowerDirector now has a companion product made specifically to be used with the latest round of touch screen gadgets, PowerDirector Mobile.

PowerDirector Mobile is a Windows 8 application specifically made to take advantage of touch screen technology in tablets and newer notebooks to make editing short videos quick and simple. It can be purchased directly from the Windows Store in Windows 8, or is included free of charge in the Ultra/Ultimate version of PowerDirector 11. After installing the app from the Windows store, it will appear on the Windows 8 start screen and is ready for use.

When you first open PowerDirector Mobile, a new project is created and you are immediately brought to the first step in your journey to having a finished video. If you need to make changes in a previous step, you can select that step at the top of the screen where the entire five-step flow chart is displayed at all times.

The first step, [Source,] is used to choose your videos and photos that you would like to include in your project. An important thing to note here is that your videos and photos must be in their respective Library folders on the Windows 8 desktop. It is not possible to import videos or photos directly from a device or memory card into your project, which is a minor disappointment. Another issue is that the interface for selecting videos and is a bit chaotic if you have a lot of content in your Library folders. Even if that content is neatly organized in folders at the desktop level, PowerDirector Mobile will display every video it can find in an alphabetical list with no other way to organize them. At this point, you can select videos and photos that you know you want to use, then move on to the next step, [Edit.]

In the [Edit] step, you can spruce up your photos or trim down your video clips to sections that you want to use. The photo editor allows you to rotate and crop your photos, add various picture frames, draw on, and stamp your photos with picture icons. The video editor is much more limited, only allowing you to trim a clip down by hand. There are no options to split a clip up into multiple clips and there are no audio editing tools. If you want to use different sections of the same video file, then you need to click on the [Source] step and import the video again so that you have two copies to work with in your [Edit] step. There are no tools included for image enhancement or color correction, so you’ll want to make those adjustments in a different application before bringing them into PowerDirector Mobile.

PowerDirector now has a companion product made specifically to be used with the latest round of touch screen gadgets, PowerDirector Mobile.

The third step, [Style,] allows you to choose a theme for your video that adds music, transitions, and titles. There are five themes to choose from, one of which is a slideshow theme that uses basic fade ins and outs, while the others use transitions and effects that are flashier.

Step four allows you to [Preview] your video and add in a few additional elements. Firstly, you can add a music track that will play in the background. Again, the music you’d like to use must already be in your Music Library on the Windows desktop for it to show up here. You can select one track that will be played from beginning to end; it is not possible to select a particular section. There is a slider that is used to adjust the volume levels of your video clips versus the volume of the background music. This is a global setting that affects the entire video project, so audio levels can’t be adjusted at different sections of the video. Depending on the chosen theme, you can also enter starting and ending titles that will be displayed over the video.

The final step in PowerDirector Mobile is [Production.] This is where you can choose how you’d like to save your project. You can save your video directly to your device as an MP4 or WMV movie file for local playback, or you can share your video directly to YouTube or Facebook. We were happy to see the YouTube and Facebook options bring you directly to the respective services within the app and don’t require a separate Web browser or an exit back to the Windows desktop. You can also export your project so that it can be opened in the full PowerDirector 11 software, allowing you to make changes with more control and subtlety. If you’re not done editing your current project and need to stop, you can also save the project as-is and return to it later.

PowerDirector Mobile has a simple, easy to understand flow chart that makes stringing together video clips with basic edits easy and fast. There is a fine line to walk between functionality and ease of use and CyberLink has done a pretty good job here. While PowerDirector Mobile won’t be replacing your full desktop editing suite, it’s a good software to use when you want to throw a few clips and photos together quickly to share an idea with a colleague or the events of a vacation with your friends.

Adam Vesely is a videographer/director of photography and photographer.