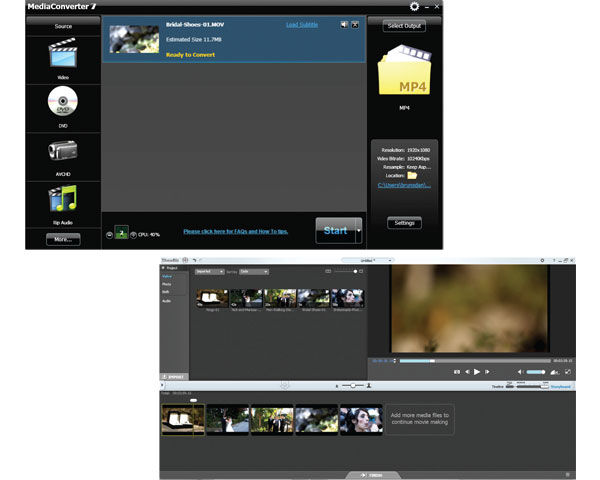 Of all the things that control our lives, time is undoubtedly one of the most influential. It determines when we go to work, how much we get paid, our level of stress, and even how we act. In fact, time is so integral to people’s lives that companies all over the world have devoted their entire existence and fortunes just to perfect its accuracy. In the same way, time is crucial to every video production. The faster an editor can push out a video, the more he or she stands to get paid. This is exactly what ArcSoft has set out to do. With its two new products, MediaConverter 7.5 and ShowBiz 5, ArcSoft is hoping to not only set the bar on speed and efficiency but to set the bar on price too.

Video editors are like the Swiss Army knife of the technology world. They not only need to know how every video codec works and how to get around in a bevy of complex programs, they have to somehow be creative as well. That’s a tall task for anyone to accomplish. However, companies like ArcSoft have been busy finding ways to make the whole process easy enough for even a first-time video editor to produce a masterpiece. With its newest video editing software, ShowBiz 5, ArcSoft has attempted to do just that – and at a good price to boot.

It’s quite apparent at the outset when using this program that ArcSoft means it to be easy. In fact, they go so far as to give you a tutorial on how to use the product when the program first opens. Though the quick tutorial is helpful, we still found that it took an entire project before we felt completely comfortable with the controls the program offered.

The interface is surprisingly similar to Apple’s iMovie, though different enough to still be called unique. Much like iMovie, ShowBiz has a film frame-style video preview where it’s possible to scrub through a clip just by dragging your mouse over the clip’s thumbnail. While some people may love this function, we found it to be a bit bothersome – especially when trying to perform a function as simple as dragging and dropping a clip to the timeline. Curiously, MediaConverter is also missing the crucial feature of being able to set an in and out point when scrubbing over the clip. While one could argue that this is a feature that only professional editors would want, it still seems like an unnecessary feature to give up.

As for the timeline, ArcSoft has given its users a way to switch between either storyboard or timeline-style editing which will come as a relief to those who have been using programs such as Windows Movie Maker Live where storyboard editing is your only option. The timeline editor in ShowBiz still leaves much to be desired, though. It comes with a maximum of nine video tracks, two audio tracks, and two title tracks so if you want to add lower thirds, along with a project title text and credits, you’re out of luck. This is a bit surprising since most of the other video editors in the consumer editing category allow more than two title tracks. However, for a price of $80, that’s one detail that many first-time video editors may be willing to look past.

Set that aside for a moment, though because one detail that is tough to look past is the huge list of codecs that ShowBiz 5 supports. In fact, it’s undoubtedly the best feature of this product and this is what you’re really going to want. The program can import and export to ASF, AVI, MOV, H.264, MPEG-1, MPEG-2, and MP4, which should cover almost any consumer camcorder on the market. ShowBiz 5 can even get rid of the pesky problems that often plague budding cinematographers such as excessive camera shake and noise with just the click of a button. Best of all, the program uses both NVIDIA and AMD graphics cards to speed up rendering and H.264 conversions. Even so, we’d be remiss to say that we didn’t experience our fair share of choppy playback when bitrate was high (in the 40-50 Mb/s range). Nonetheless, it’s hard to expect every piece of video to play back as smooth as a knife through butter for a price of $80, so it wasn’t really a deal breaker for us.

It wasn’t all that long ago that “rendering video” meant several hours of watching a render bar creep across the screen slower than pine sap in the middle of February. With the exponential increase in CPU power, that scenario has thankfully become a thing of the past, but, of course, everyone still wants to save time ever more. So when software like Adobe’s Premiere Pro, and Sony’s Vegas Pro showed that GPU rendering could lead to vast improvements in real-time effects and encoding, it was only a matter of time before other software engineers got in on the fray. By allowing GPU rendering of H.264 video and other popular video formats, ArcSoft has done just that with their newest version of their MediaConverter encoding software.

ArcSoft didn’t just stop there. They also saw it fit to include a 2D-to-3D plug-in that can analyze 2D video clips for depth and add either a side-by-side or red and cyan 3D effect to any clip. Their software can also utilize NVIDIA CUDA technology to scale low-quality SD video to HD resolution while still keeping much of the detail. In our tests, we found the HD scaling did keep much of the detail as promised, though it tended to over-sharpen the video in the process. In addition, many of MediaConverter’s video encoding presets seemed to leave blocky artifacts compared to similarly rendered footage out of other popular video encoders.

Even so, we found MediaConverter lived up to every one of its speed claims – and more. We transcoded a one minute H.264 video to MP4 at 20 Mb/s in both MediaConverter 7.5 and another popular media encoder and surprisingly found that MediaConverter transcoded the video in 44 seconds while the other one took 75 seconds to crank out the video with the exact same settings. With time savings like these, MediaConverter’s price of $40 seems to be worth every penny.

For beginning editors who need to save both time and money on their video editing projects, ArcSoft’s ShowBiz 5 and MediaConverter 7.5 software are an easy choice. Though their editing software could benefit from more powerful timeline controls, its ability to accept many popular codecs and to use both the power of the CPU and GPU make it hard to beat for simple video editing. In much the same way, ArcSoft’s ability to convert 2D clips to 3D and use of the GPU for video rendering, makes their compression software worth a second look for any video editor.

Aimed at the professional, Shure continues its tradition of superior quality with the VP89 end-address shotgun condenser microphone.