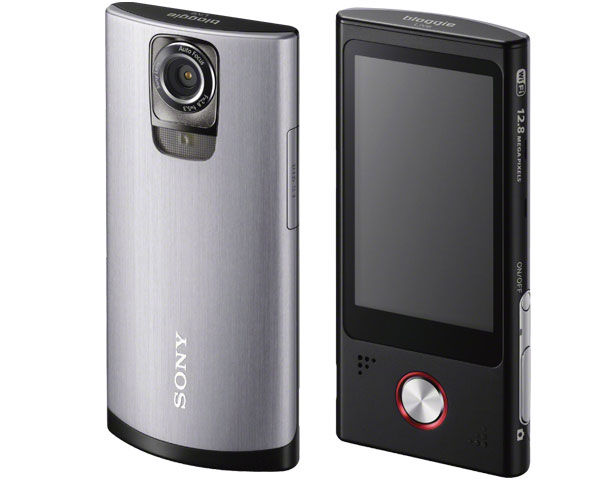 With the ever-growing multitude of small format recording devices on the market today, it becomes increasingly more difficult for companies to develop unique products that stand out from the crowd. Sony certainly seems to have accomplished that however, with its new Bloggie Live, capable of streaming live video via Wi-Fi.

Accompanied by few extras and no assembly required, the Bloggie Live comes straight out of its box pretty much ready for action. Charge the internal battery by connecting the device’s swing-out USB arm to a computer with the included USB extender cable and you’re ready to go. The only other accessory is a wrist strap – its use is highly recommended. The Bloggie Live has a curved shape with a smooth, brushed metal surface and we found it a bit tough to hang on to and might easily be dropped. 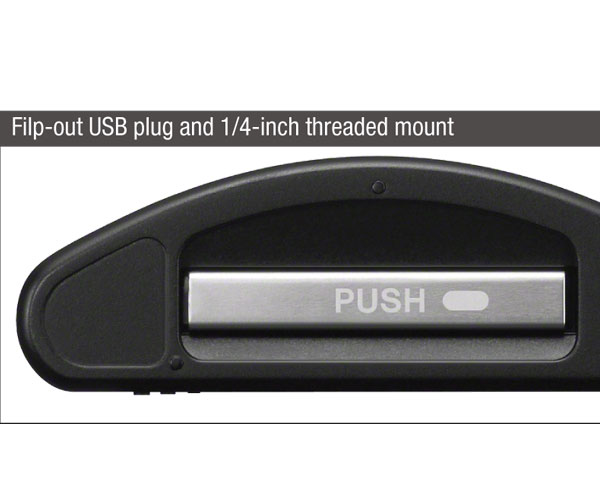 Roughly the size of a cell phone, the exterior of the Bloggie Live is fairly simple, with a minimum of buttons and controls. The front is home to the lens and video light with the back dominated by the 3-inch LCD touch screen. Beneath the display is the video record button and speaker. The Wi-Fi receiver lives at the top of the device while the bottom hides the flip-out USB arm for charging the battery and directly connecting to a computer. Alongside the USB arm is a standard, threaded, 1/4-inch tripod mount. Its location is unfortunate, however, since widescreen video capture requires the Bloggie Live to be held in the horizontal position. Including a swivel-ball-mount tripod adapter with future units would solve this situation nicely. Facing the display, the left side contains the HDMI port and wrist strap tie-down hook while the right side has the stereo microphone, power button, charge lamp and still photo shutter button.

When switched on, icons appear across the top of the screen indicating information such as resolution and battery status. Along the right side is a touch-activated zoom slider and across the bottom are the video light on/off toggle, viewing/record mode toggle and menu icon. Activating the menu brings up several options for sharing and a few configurable settings. The main setting’s sub-menu, among other things, lets you tinker with Wi-Fi settings, select HDMI output, format the device and set the date and time. The shooting setting’s submenu allows you to select among three different photo sizes: 12M at 4:3; 8M at 16:9 and 2M at 16:9. Movie size may be set to full HD (1080 30p); HD Sport (720 60p) or HD (720 30p). Images are stored on the unit’s 8GB internal flash drive. There are no media slots for expanding the storage capacity.

Still photo and video capture with this camera are quite good, particularly when both the camera and the subject remain relatively still and considering that record functions are automatic, with no options for controlling white balance, exposure, focus and such. The auto white balance appears to be accurate while the auto focus is a bit slow to respond. Low light conditions yield quite a bit of noise. All-in-all though, in a fairly calm, well-lit environment, performance is impressive, with good color reproduction and crisp, detailed images. Audio is typical small-camcorder fare – adequate, not exceptional – with a faint clicking sound in the quiet places, presumably from the auto focus feature.

Of course, the main feature of this camera is live streaming, which it does quite well, but only as good as the Wi-Fi signal it can lock on to. This is true with many Wi-Fi dependent devices. To help this situation, optimized, low-res videos are streamed, while high-resolution versions are simultaneously stored locally on the device’s memory.

During tests we found that when our signal and upload speeds were insufficient, we experienced dropped connections, difficult log-ins and choppy video streams. When the signal was strong and the upload speed fast enough, we had our anticipated “whoa…” moment, as quality HD video streamed live across the airwaves. This feature reminds us sort of the early days of cell phones when dropped calls were common, and we know as Wi-Fi becomes more prevalent, so, too, will the abilities of live broadcasting cameras like the Sony Bloggie Live.

If you’d like to share life’s events with friends and family, as they happen, then the Bloggie Live camera may very well be the device for you.