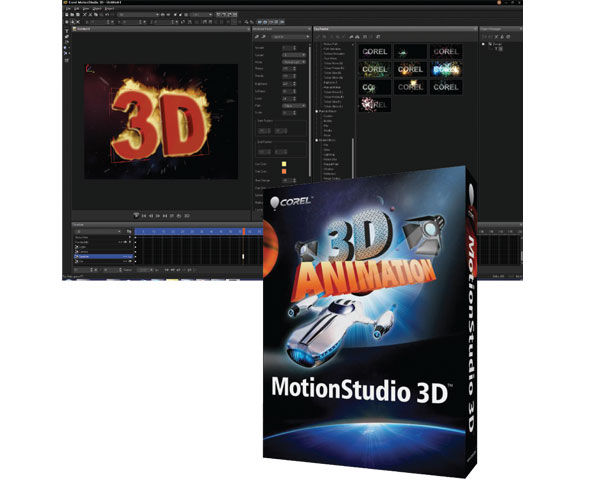 The new Corel MotionStudio 3D offers great power for adding 3D text and graphics animations to your video productions – with animated extruded text, flying and exploding 3D objects, and naturalistic fire and smoke. Even better, this new product is designed for enthusiast video editors, with an accessible interface to help you quickly create sophisticated animations from pre-built components, and it’s priced at only $100. 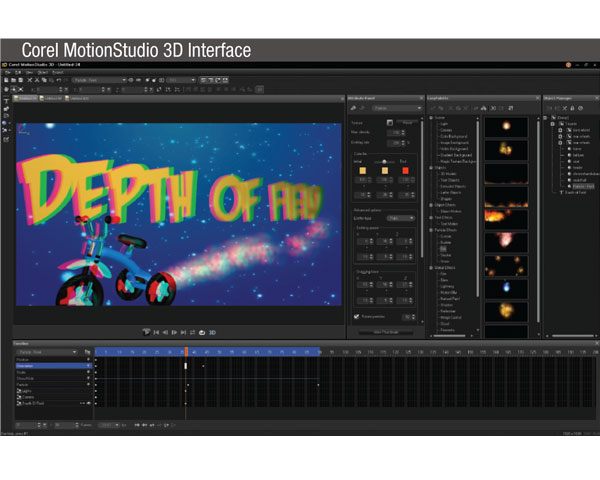 So what is MotionStudio 3D? Underneath, it’s built on a core of a quite powerful traditional 3D modeling and animation tool. For example, you can import and export 3D geometric models in common modeling formats (DirectX and 3D Studio), build complex models from scratch with detailed materials, and combine objects into hierarchical structures (such as tires on a car). You then can keyframe animate the object shapes and motion, and build entire 3D scenes, complete with lighting and camera control.

This all sounds very complicated, but what Corel has done with MotionStudio 3D is to provide an entirely different personality focused on the needs of video editors — particularly for preparing Web animations and videos with transparency to overlay into your productions. You can export animations as Flash (SWF) or animated GIF for the Web, or in a wide variety of common video formats, including 32-bit alpha for transparency blending and 3D anaglyph or side-by-side formats.

And you don’t have to do 3D modeling from scratch. MotionStudio 3D comes with an extensive library of more than 140 pre-defined objects, including spinning globes, turning gears, and flying spaceships. Then you can select from hundreds of materials, object styles, and animated effects to customize the objects in the scene. Plus, all this power also works with 3D animated text, plus particle effects including bubbles and snow.

After you assemble your scene, you can add global effects, including lightning, fireworks, and clouds, and add realism with lens flares, shadows, reflections, motion blur, and even depth of field. Then set the final scene view with backgrounds, global lighting, and camera settings.

Of course, you also can dig in further to customize the object attributes and fine-tune the keyframed animation. But all the heavy lifting of setting up the objects, attributes, motion, and scene can be done as simply as drag and drop from the library.

So let’s walk through using MotionStudio 3D, from quick drag and drop assembly to customizing with the deeper features.

The MotionStudio 3D interface has a familiar design, with the main Edit window at the top, the Timeline window across the bottom, plus option panels to the right, and additional toolbars above and to the left. You use the Edit window to directly manipulate the objects as you edit them and preview the animated result, and then access the panels to view and set attributes and access the library of pre-built components.

To start building an animation, go straight to the EasyPalette, which is the library of pre-built objects, styles, and effects. Click through the hierarchy to select a category, and preview the available items (including animations). For example, click Text Objects and select the desired look, with pre-defined font, texture, and 3D bevel. The 3D text then is added to the Edit window, where you can double-click to edit the text and set the font attributes.

Next, modify the look of your text by using other pre-built elements in the EasyPalette. Browse under Object Style to change the surface material (e.g., plastic, ceramic, fabric), adjust the material color or add an image or motion video texture, and enhance the bevel or add a frame.

Now, it’s time to animate your object across the scene. Browse under Object Effects to bend, twist, explode, and tumble and bounce your object. Or for 3D text, browse under Text Effects for different types of text motion paths and per-character animations.

With a handful of clicks, you now can have a 3D text animation customized from multiple hundreds of options, for example with a beveled look, motion video texture, and popping characters flying across a curved motion path.

Of course, once you’ve seen how quick and easy it is to make a 3D animation, you’ll be thinking of how more powerful it could be with some further customization. So it’s time to turn your attention to the Timeline and Attribute panels. Unlike with video editors, the MotionStudio 3D timeline does not show each layer in the scene — instead the rows list the keyframable attributes for the currently-selected object.

Even better, the styles and effects that you have selected from the EasyPalette have already constructed the timeline for you, complete with the current attributes and keyframe points set for the animated effects.

So to adjust the object’s position in the scene, click the first three rows in the Attribute panel for position, orientation, and scale, and just click and drag the object within the 3D scene, or directly enter the X, Y, and Z coordinates in the toolbars. To adjust the other object attributes, click the corresponding row in the timeline to view and modify the settings in the Attribute panel.

And to animate any of these settings, add a new keyframe in the timeline and change the attributes at that point.

If you’re interested in animated text for an open, or a stand-alone flying object to overlay on a video clip, then the job is complete. Or you may want to create more complex 3D scenes.

You can add more elements through the EasyPalette, or you can build your own objects. Select 3D geometric shapes or particle effects, or draw 2D shapes and import your own 2D artwork and then expand them into the third dimension, including merging overlapping regions and cutting holes. Then use the Graphics tool to extrude flat art into 3D, or the Lathe tool to rotate 2D shapes around an axis.

Finally, as you start to develop more complex scenes, use the grouping tools to make more complex objects, and to view and access the hierarchical scene structure in the Object Manager panel.

Corel MotionStudio 3D is an impressive re-packaging of traditional 3D modeling into a nicely accessible tool for video editing enthusiasts. You can create quite effective text and graphics animations without being a 3D expert by using the models, styles, and effects in the EasyPalette library. And the underlying 3D modeling architecture provides lots of headroom to further customize your productions with your own objects, textures, and motions.

Especially at this price, it’s worth downloading the trial version to see how you might be able to add a third dimension of animated titles and 3D elements into your Web and video productions.

All these possibilities will be very tempting, but please do use MotionStudio 3D responsibly – don’t get too carried away with 3D objects dancing and bouncing all over your videos.

Optimized for Dual Processor/HyperThreading: No