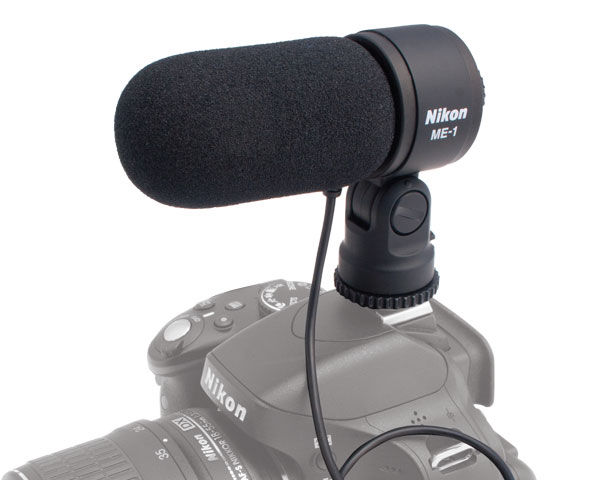 Nikon ventures into new territory with its ME-1 stereo microphone for DSLR cameras. DSLRs of all makes have long been plagued with sub-par audio performance. The ME-1 is a step in the right direction but is it a step far enough?

The ME-1 comes with a wind screen, soft carrying case and a simple instruction sheet. Its mounting foot slides into the camera’s accessory shoe and tightens into place with the usual lock ring mechanism. The attached cable, which terminates in a 3.5mm stereo mini-pin jack, is a bit long for on-camera use but does allow some room to move the microphone further off the camera using an accessory arm. Excess cable is controlled using a channel molded into the back of the microphone mount helping to prevent excess noise caused by the cable rubbing against the camera body.

The mount is equipped with a locking screw that may be loosened to allow the microphone to tilt up or down. This is useful for directing the microphone to an audio source that may originate from somewhat above or below the camera. The microphone sits inside a rubberized shock mount to reduce vibration and the resulting excess noise. The rear of the microphone is fitted with a rotary dial for switching on and off the device’s low-cut filter whose purpose is to cut out low frequency noise from wind and other sources.

Initially designed for photographers, DSLRs naturally focus on image excellence, with audio being a secondary consideration. Furthermore, there simply isn’t enough room to cram a pair of XLR connectors onto their small frames. Various work-a-rounds have been conceived but all add up to additional bulk, greater expense and/or increased complexity. Devices abound that can adapt your professional XLR microphone to a standard 3.5mm mini-pin jack but you can expect to spend up to several hundred dollars depending on which bells and whistles are included.

If your DSLR doesn’t have an audio jack at all then you have a different problem altogether. In this case you’ll need to invest from one to a few hundred dollars in a portable audio recorder. On the low end you’ll only have the device’s built-in microphone to record with while higher end solutions provide XLR connectors for balanced, professional microphone use. In either case you’ll still be faced with the task of syncing the audio in post.

Nikon has introduced the ME-1 stereo microphone in an attempt to meet the need for improved DSLR audio without the aforementioned problems. It doesn’t take up much space, weighs very little and “connects to compatible DSLR cameras that have a 3.5mm Mic jack.” The real questions though are, “How well does it perform,” and, “Is it worth the price?”

We tested the ME-1 on a Nikon D5100 on a fairly windy day, with the windscreen both on and off and with the low-cut filter in both the “Flat” and “On” positions. To provide a baseline comparison we also performed all the same tests on the D5100’s built-in mic. Pickup tests were performed at six feet, ten feet and twenty feet. At six feet and ten feet both the onboard mic and the ME-1 picked up equally well with no discernible difference in volume. At 20 feet the ME-1’s pickup was slightly clearer. At all distances however, while the sound quality of the built-in was noticeably “tinny,” the ME-1 provided a somewhat fuller, richer tone.

With its windscreen off, the ME-1 picked up considerably more wind noise than the built-in mic. Putting on the windscreen greatly improved the reduction of wind noise but was still louder than the built-in mic. This makes sense when you consider the mic placement on most DSLR cameras. Usually on the front of the camera, tucked away in some curve of the body, the microphone is shielded from the wind on virtually all sides. Wind is blocked further by the lens on the front and the operator behind. A shoe-mounted microphone is placed directly on top of the camera with no wind blockage from any side.

Under moderately windy conditions the low-cut filter provided no noticeable improvement, with slight improvement in light wind. The filter is engaged using a ridged, rotary knob, about 1/8-inch wide, made of tapered plastic, which we found somewhat difficult to turn.

If there is any place where the ME-1 excels it’s in the reduction of noise introduced by the lens mechanism when manually zooming and focusing and during auto-focus. While some lens noise can still be heard it is a substantial improvement over the built-in microphone.

Getting your audio capture away from the body of the camera is always a plus and is bound to produce better results than the built-in microphone. If you shoot strictly for self and family and genuinely don’t care about or notice things like wind and lens noise then the camera’s built-in mic is probably fine for you. If you’re looking for more professional audio you’ll be better served by checking out an XLR adapter solution or portable audio recorder. If, however, you fall somewhere in the middle and want to minimize the whir and click of the lens while gaining some improvement in tonal quality then the ME-1 may be the answer you’ve been looking for.

For the consumer user wishing to improve on the quality of the camera’s built-in mic, while reducing zoom and focus noise, the Nikon ME-1 stereo microphone offers some real potential.