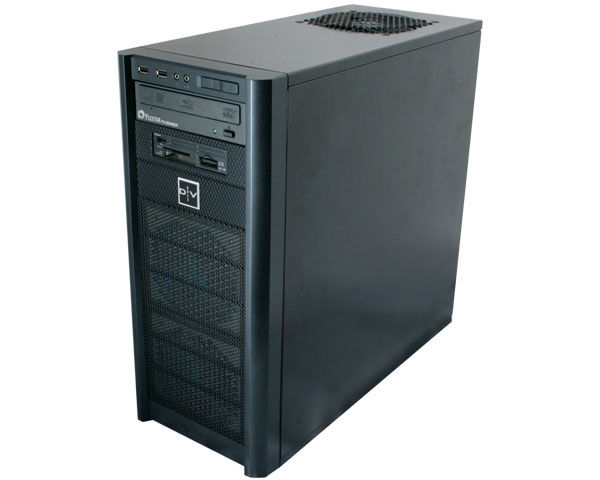 DVGear has just released a new entry-level video editing computer, but don’t let the “entry-level” fool you, this computer delivers. With a Quad Core i7 processor, 16GB of ram, the new Nvidia Quadro 2000, and a multiple format memory card reader, all your video editing wants will be met. 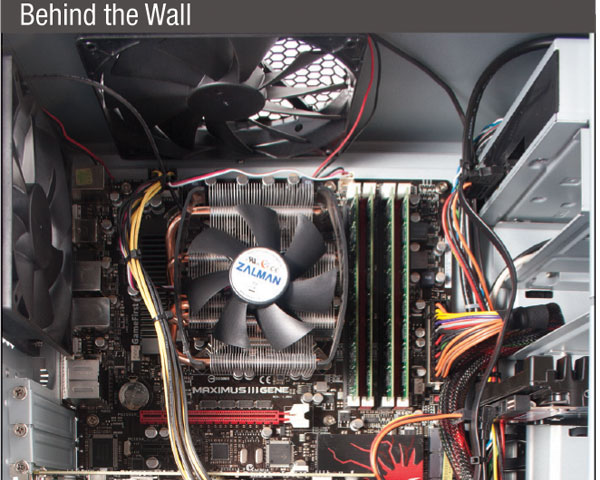 This computer is made only of name brand components. The case is well cooled with its 5 large case fans, so overheating will never be an issue. Inside the case everything is very neat without tons of cables cluttering up the place. The computer has a 650-watt Antec power supply with a large 120mm fan. The motherboard is an Asus Maximus III GENE with lots of onboard features: RAID, SLI, 8 Channel Audio, Gigabit Lan, 9 USB, eSATA, and FireWire. To top it off, there is a multiple format memory card reader that supports the formats: CompactFlash I/II, SD,mini-SD, MMC, SM, xD, and MSPro Duo. The motherboard even comes equipped with an onboard power and reset button, not super useful but cool nonetheless. If you ever wanted to see how many Premiere Pro windows you can open at once, 16GB of ram will definitely help. If you do any sort of editing in Premiere Pro or 3d Graphics the Nvidia Quadro 2000 will decrease the time wasted waiting for something to render. For storage, the computer has two 1TB Drives in hardware RAID-0 and a 300GB WD VelociRaptor for the operating system. If the data on your project drive is irreplaceable you should change the hard drives to RAID-1. From the Antec Case and power supply to the Asus motherboard, all the components are made of high quality name brand parts. Usually, with known parts, you can rest easier knowing that mid-project a power supply isn’t going to die or a hard drive fail bringing your work to a standstill. If there is an incident the computer can be returned to the manufacturer under the 1-year parts warranty for a hassle free fix. 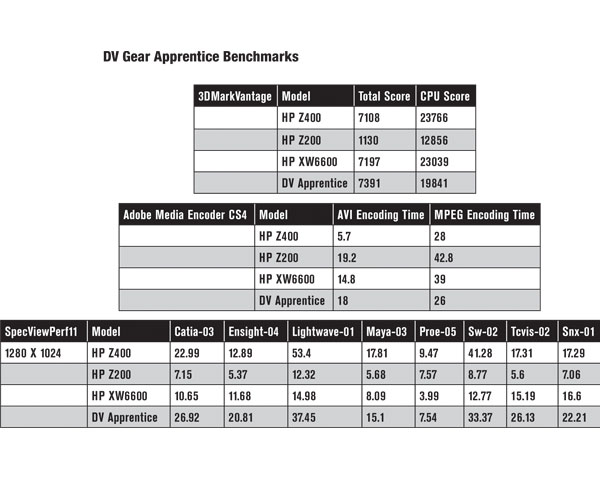 The Windows Experience Index base score was 5.9, not the highest score we’ve seen. The bottleneck for the score however was the Western Digital 10k RPM hard drive. The processor and ram ranked at 7.5 and the graphics card ranked at 7.0. In comparison, the fastest base score we’ve seen is from a 12-Core computer that got 7.2. With that said, this computer is a good contender against top of the line video editing machines.

To test the graphics card, specviewperf11 was used. This program rotates complex 3d models using 6 different programs and records the framerate. The HPZ400, which has a six core processor and a Quadro FX 3800, was nearly tied in performance as seen in the benchmarks. The HPZ400 has a higher price tag and server grade components however. The DV Apprentice is using the newly released Quadro 2000 which is designed to beat out older mid-range workstation cards at a lower price.

Want to know for yourself how this computer ranks? The 3dmarkVantage score was P7391 using the performance setting. By looking at 3dmark’s website you’ll see this ranks the computer in the top 25 for Nvidia Quadro graphics cards.

When buying any computer a few decisions must be made beforehand: what your budget is, what you plan on using the computer for, and what is the bare minimum you need. For a video editor the base need is a quad core computer with 4GB of ram. These can be found all over the internet for around $500. Unfortunately for $500 you won’t have RAID and you probably won’t have FireWire, a fancy graphics card, the fastest computer, or a media card reader. All of these things will help make your job easier and speed up performance. So where does the DV Apprentice fall into?

The DV Apprentice has all the extra features of a top of the line computer, without the top of the line price. Many of those just doing video editing don’t need all the extra features, but they are always nice to have around just in case. In the end it all comes down to how much money you have. For those with a small budget the $500 computer is your best bet. For those with a medium sized budget the DV Apprentice is a good fit. If you have a pot of gold under your bed well you’re better off to get the most expensive computer there is.