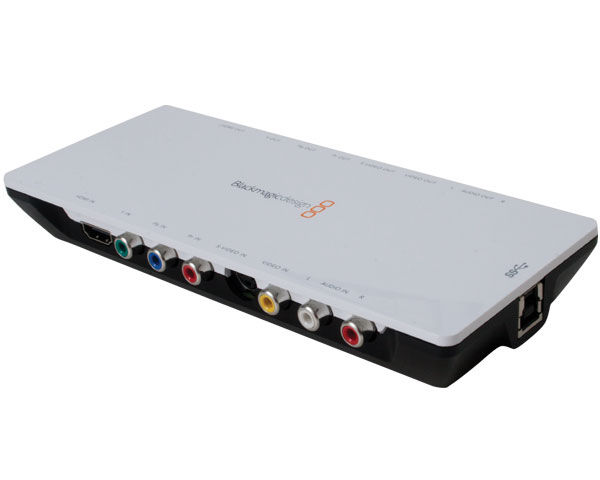 Blackmagic Design’s Intensity Shuttle is geared towards editors looking to retain and capture the highest quality video. The Shuttle is an inexpensive video capture and playback solution that has the ability to capture and playback high quality 10-bit uncompressed video in the form of an external device. The Shuttle is powered through a relatively new high speed USB 3.0 connection that turns out to be about 10 times faster than regular USB 2.0. USB 3.0 clocks in around 4.8Gb/s and is slowly being adopted by computer manufactures, which ultimately makes this all possible without breaking the bank. 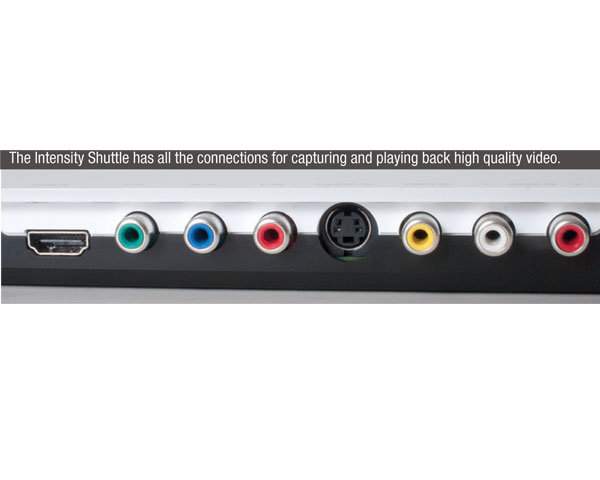 The Intensity Shuttle can capture high quality and analog footage through several ports, which includes HDMI 1.3, Component, Composite and S-Video. The shuttle allows you to simply plug in and bypass your camera’s video compression, pulling directly from the image sensor for capturing the highest quality possible. So, if you’re in a studio environment you could capture directly to your computer at a fraction of the cost of other professional solutions. The device also has the ability to capture an array of video formats from 480p/29.97 to 1080p/29.97 among many others. Capturing was rather simple using the Intensity Shuttle, you need to just be sure to have the video formats matched up on both ends or else you’ll be staring at a blank screen.

We used the included Media Express software to capture from several devices we had at the Videomaker offices through the HDMI port. Media Express was intuitive and easy to use with no complaints, however, the Intensity Shuttle is compatible with other software like Sony Vegas Pro and Adobe Premiere, for example, so you don’t necessarily have to use the Media Express software – but it’s nice to have on standby. We were impressed with the results, although the files were rather large when capturing uncompressed video. You will definitely want to factor in added storage for a 10-bit workflow, we would recommend even going with a RAID setup if you’re serious about editing 10-bit uncompressed video.

The Intensity Shuttle is ideal for monitoring uncompressed HD, HDV and even DV footage on your big screen TV or video projector by simply connecting to the built-in HDMI port. Of course, you could use the other outputs available as well, but HDMI will provide you with the highest quality. This feature alone is incredibly important for accurately monitoring your footage while color grading and it justifies the price tag alone.

The Intensity Shuttle now allows editors to capture and display high quality 10-bit HD uncompressed video at a fraction of the cost of a few years ago, all wrapped up in a simple-to-use external device. Editing with 10-bit uncompressed video allows editors to apply intensive color effects without degrading their footage. Having the ability to play back that footage in its 10-bit uncompressed glory makes this a must-have accessory for any serious editor’s workstation. As with any new computer accessory, make sure the Intensity Shuttle is compatible with your system before purchasing it.

Requirements: Installation: USB 3.0. Requires an x58 based motherboard with onboard USB 3.0, or a USB 3.0 PCI Express card and an x58 or P55 series motherboard. Does not support USB 2.0 capture and playback.

The Intensity Shuttle is an easy-to-use affordable solution for capturing and playing back high-quality video, with an array of inputs and outputs, and a well-thought out design.