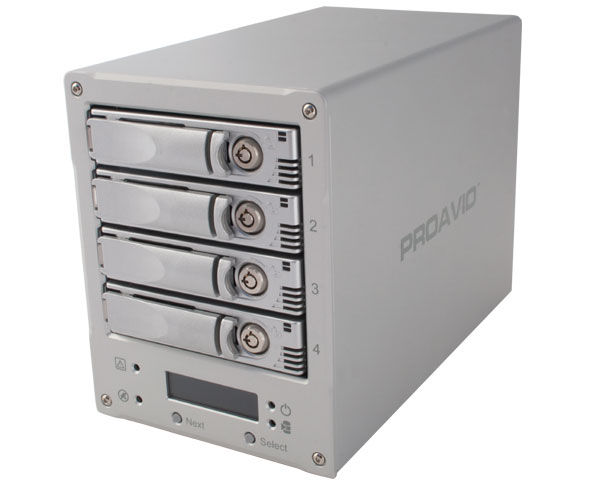 Technology is always improving. However as technology information rises, so does the amount of space needed to hold it all. Nowhere is this more evident than in the world of video production. As video bitrates get higher and projects get more complex, it can be extremely tough for your computer to not only read your information fast enough, but to be able to find a place to store it all. Add to that the fact that the entire livelihood of many editors lives on a hard drive and you can see why having a fast and reliable storage solution is extremely important.

This is where RAID (Redundant Array of Independent Disks) solutions like Enhance Technology’s EB400FR come in. By utilizing the speed of multiple disks at once and by writing two copies of every file over a series of four or more drives, RAIDs help editors to play their projects smoothly and keep them safe. Something that every editor can appreciate. 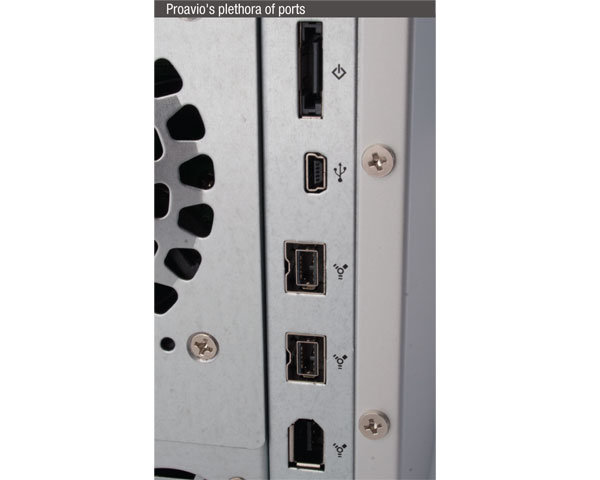 The Proavio EditBOX EB400FR is a part of Enhance Technology’s RAID solutions that are meant for studios working with high-resolution media. That means they designed these drives specifically for the needs of video editors – a welcome piece of news if there ever was one. On the outside, the drive is made of a very high grade aluminum, with a nice finish and plenty of LED indicators to give editors a heads-up in case of drive failures or rebuilds. We really liked the status LCD display at the bottom of the unit, which gave us a visual way to set up and diagnose the drive. There’s nothing quite like plain English when it comes to finding out what went wrong.

Our version came with four 3TB SATA II drives for a total of 12 terabytes. However, the enclosure also comes without drives if you plan to purchase your own. Initially, 12TB may seem like overkill but considering the fact that a 10-minute video clip can take up more than 2GB alone, 12TB of storage is probably the right amount to keep the enclosure relevant into the future.

One of the nicest features of the drive is the hardware RAID-5 controller. Having the RAID processes happening inside the unit rather than the computer kept our read and write speeds fast without having to give up a portion of the computer’s processing speed. Plus, the fact that the unit was formatted in RAID-5 meant that our data was not only protected from a single hard drive failure, but was able to utilize the speed of all four disks giving us a more responsive editing experience.

Enhance Technology was also able to design its enclosures with a cable-less backplane preventing signal degradation and latency which should give editors a more reliable hard drive. Speaking of design, the Proavio also came with a modular I/O bridgeboard and hot-swappable cooling fan. This means that you won’t have to buy a new drive just to fix a broken fan or port, saving you time and money.

One of the most impressive features of the Proavio EditBOX was the sheer amount of ports the unit had. Enhance Technology not only included USB 2.0 and FireWire 400, but also threw in the ever elusive FireWire 800 and an eSATA port, giving users all kinds of options for speed, no matter if they’re on a Mac or a PC.

There’s nothing more distracting or annoying when editing audio than an enclosure with a noisy fan. Not only can it affect the way you edit the sound in your video but it can lead to a certain amount of hearing loss over time. As a result, having a quiet fan is incredibly important to almost every video editor. Enhance Technology’ fans were some of the quietest we’ve ever heard on a RAID. However, we found that there was still a bit of noise to contend with so keeping it under a hard surface such as a desk is probably a good idea.

As good as any RAID might be, Murphy’s law still seems to be almost inevitable. If any drive does eventually go permanently south, the EditBOX makes it easy to replace drives by merely unlocking a bay and taking out four screws, much like any internal drive. There is one caveat however. The drive you replace it with has to be the same size and preferably even the same brand in order to work nicely with the other drives in the RAID. At the same time, Enhance Technology offers a standard 2-year warranty with a 30-day money back guarantee and unit exchange. Also, if you buy the unit with hard disks already inside, a one year advance replacement package is also available giving you the kind of peace of mind that every drive should provide.

When it comes right down to it, the most important feature that will separate a quality drive from a bad one is its speed. We tested the Proavio EditBOX with AJA and Blackmagic software to see how it would hold up when writing and reading video files from disk. As we’re all too aware, nothing is more frustrating than pressing the space bar in an editing application and hearing disks spin up rather than seeing a preview of your video.

Not surprisingly, we found the disks performed slightly above average with a write speed average of 185MB/s and a read speed average of 168MB/s using the AJA Speed Test. We did find that bigger files tested higher on both read and write times versus smaller files that were 128MB or less. Interestingly, the Blackmagic Disc Speed Test came out a shade higher with an average read rate of 171MB/s and write rate of 196MB/s, probably due to the file sizes it tested rather than a speed improvement on the discs.

More than likely, these speeds have a lot to do with the hardware RAID controller as well as the type of hard disk drive that the Proavio is using; a Seagate Barracuda XT SATA drive. For speeds any faster than what the Proavio can do, the only real option is loading the unit with 15,000 RPM drives or SSD drives which are far more expensive. As it was, we felt the speeds were more than sufficient to make any editing experience much more enjoyable.

External hard drive purchases can be incredibly tough choices to make. No editor wants to lose countless hours of work by buying the wrong kind of hard drive. However, with its RAID-5 hardware controller, solid modular design, and excellent warranty, the EditBOX EB400FR is a safe bet for any video editor.

With its large storage capacity, plethora of fast inputs and outputs, and reasonable price, the EditBOX EB400FR gives any editor the choice to get projects done efficiently.