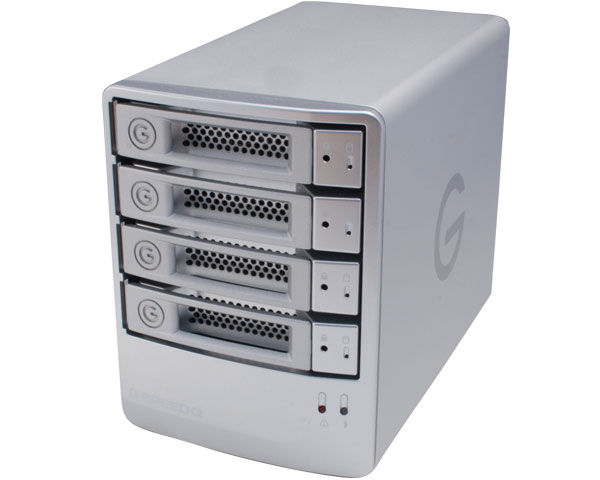 Here’s a fact that everyone can agree on: losing data stinks. Without a good storage solution, however, video editors constantly find themselves playing a digital version of Jenga – one wrong click and all of a project’s data comes falling down. Especially when you’re working with footage from a big production, losing data can mean a significant loss of money and time. At best, it might mean a sincere apology to a client and an extra week of work. At worst, it might sound the death knell for the entire project and put a permanent stain on your reputation. Though there aren’t any ways to make sure data is 100% safe, there are some things anyone can do to diminish the chances for data to disappear into cyberspace. One of those ways is by having a RAID drive. RAID =Redundant Array of Inexpensive (or individual) Disks. RAID drives allow video editors to mirror their data in RAID-1 mode, speed up their hard drive speeds with RAID-0 or do a bit of both with RAID-5. Of course the best part is that most RAID drives can have an entire hard drive fail and still be able to get back all of the data that was lost. With G-Technology’s recent release of its 8TB G-SPEED Q, they’ve shown that not only are they intent on saving your video projects from failure but they’re intent on giving you a lot of space to do it as well. 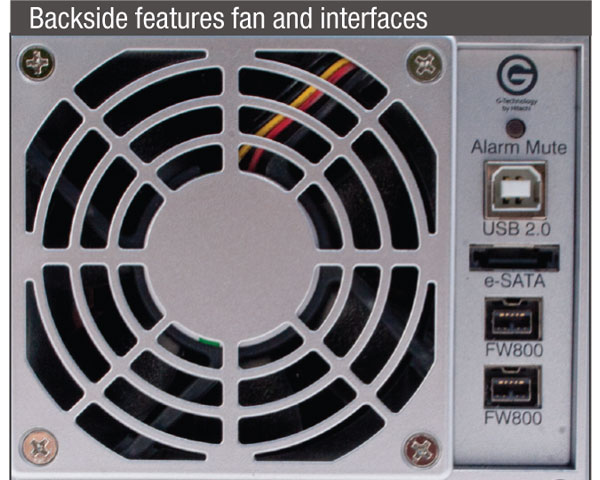 Anyone who has ever fallen in love with the sleek and sturdy design of a Mac will inevitably enjoy G-SPEED Q’s design. With its rounded aluminum corners and minimalistic approach, this drive will fit perfectly alongside any Mac while still looking cool next to a PC. True to the Mac style, its enclosure is made out of sturdy and sleek aluminum, allowing the drive to stay cool and compact. In fact, it’s also so small and compact that it’s weight can honestly take one by surprise. The first time we picked up G-Tech’s unit we nearly dropped it due to its 12.5 pound bulk. This puts it in the same weight class as LaCie’s 4big Quadra and Promise’s SmartStor.

Of course, one of the most important aspects of any RAID drive are the connections types and G-Tech doesn’t disappoint. The G-SPEED Q was thoughtful enough to include USB 2.0, two FireWire 800 ports for Daisy Chaining purposes, and an eSATA port for blazing fast speeds of up to 3 GB/s. Of course, it was a slight disappointment to not see either a USB 3.0 or Apple and Intel’s Thunderbolt technology, but considering the unit’s release date, it’s hard to be too disappointed.

Looking at the front of the unit, G-Tech has included four hot-swappable drive bays. Swinging a latch on each unit and unlocking it with an included key allows the bays to come out of the unit. The latches also felt well-designed to the point where even a fairly hard push wouldn’t ruin the hinges. Inside each bay that G-Tech sent us were 2 TB Hitachi Ultrastar “enterprise-class” SATA hard drives. This means that the hard drives should be able to withstand constant use even while continually spinning at a fast 7,200 RPM with 32MB of cache. Though this more than likely adds to the price of the unit, it also gives editors something that’s hard to put a price on: peace of mind.

In addition, each G-SPEED Q comes with an Oxford 936SE RAID controller that allows editors to use the drive in either a RAID-0 or RAID-5 configuration. This means that if you want to utilize the speed advantages of writing to 4 drives at once you can use RAID-0. Or if you want to utilize both some speed advantages and redundancy for backup purposes you can set your drive for RAID-5. At the same time, the RAID controller also allows your computer to keep doing what it does best without devoting processing power to keeping your RAID drive organized.

Lastly, no good RAID system is complete without a helpful LED diagnostic system and a quiet fan. While we enjoyed the addition of blue LEDs showing us that each drive was fully functional or amber LEDs showing us that something was wrong with the drive, we were slightly disappointed by the level of noise coming from the RAID’s fan. Fan noise is a constant issue with RAID enclosures since any additional noise to an edit bay can make it harder to do audio correction in post. In this manner, we thought the fan on the G-SPEED Q was a bit too noisy to be used on the desktop. Instead, if you’re going to be using the G-SPEED Q at your edit station, it would probably be best to have it under the desk with the fan facing some soft or sound-dampening material.

When it comes right down to it, the most important feature that will separate a quality drive from a bad one is its speed. As such, we were impressed by the performance of the industry renowned Hitachi Ultrastar drives.

We tested the hard drive in RAID-5 mode running on an HP Z400 with 8 GB of RAM, an Intel Core i7 CPU, and the Windows 7 64-bit edition that gave us the fastest possible speeds to work with. While hooked up to our eSATA ports, we found that the average read rate was 196.1 MB/s, used a mere 1 percent of our CPU, and had an access time of 12.1 ms which is on the fast end of similar drives on the market today. Naturally, when using our USB 2.0, we found the speeds to be slower than our test with eSATA or FireWire 800. Even so, the drive definitely performed as well as any drive of its kind on the market and with “enterprise-class” hard drives running inside, you can bet that the drives will be giving you those kinds of speeds well into the future.

Any external hard drive purchase decision seems to come down to three factors: speed, price and the amount of inputs/outputs. On just about every one of these factors the G-SPEED Q excels. In addition, with its sturdy and sleek design and large capacity, this is one drive that will last any video editing professional a long time.

A fast and flexible RAID drive that will keep data safe within its solid and sleek design.