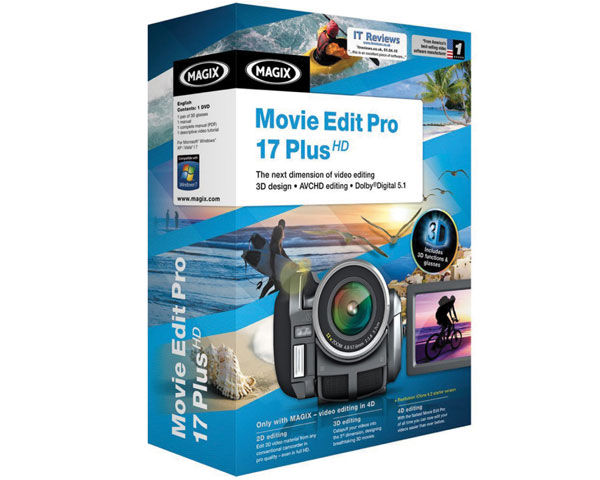 MAGIX Movie Edit Pro 17 packs an impressive punch for a $60 video editing tool, with the Plus version for $100 adding even more sophisticated features including effects masks, MultiCam editing, and Dolby Digital 5.1 mixing – plus stereo 3D editing with photos and video.

This is serious video editing – Movie Edit Pro provides deep support for the latest technologies and devices. It supports direct import from portable devices and HD camcorders (including native AVCHD), editing with extensive transitions and effects, and audio dubbing, and then export to portable devices, online, and to DVD and Blu-ray with animated menus.

Movie Edit Pro is not an “E-Z” consumer application. It’s is designed very much in the style of traditional video editing tools, with the main program monitor for viewing clips, tabbed windows to Import your media and access Fades (transitions), Titles, and Effects, and then the Storyboard/Timeline strip below. You also can customize the interface windows and save favorite layouts.

Movie Edit Pro provides three editing modes: scene overview mode shows thumbnails of the first track to quickly re-order your scenes, Storyboard mode shows thumbnails with transitions and controls for editing, and Timeline mode is for full multi-track editing, with up to 32 tracks in Movie Edit Pro, and up to 99 in the Plus version. The tracks are not limited to specific uses (video or audio to titles); instead you can place any object in any track.

The Movie Edit Pro interface does a good job of controlling the underlying complexity of all these features, avoiding arrays of tiny buttons while still providing straightforward click and drag editing with larger icons. The interface also makes use of pop-up tooltips and text in the status bar to help describe the different tools. The next level of capabilities, including 3D viewing and editing, is then available through the menu bar and right-click menu options.

Movie Edit Pro also does not hide editing details. For example, it does not require you to pre-select a project format, but will warn you when importing a clip at higher resolution than your current project and offer to automatically adjust the project settings. And it will prompt to warn you when trying to preview a movie at high resolution, and offer to preview at half-res for better performance.

If that’s not enough, the Plus version of Movie Edit Pro 17 also adds 3D editing, import, and export, complete with 3D transitions and titles.

And you can use other techniques to shoot 3D imagery, including using two cameras on a stereo mount, shooting two photos with the same camera from slightly different angles, and carefully shooting video pans and then duplicating the footage with a small time offset to turn the camera movement into stereo. You then can import the 3D material into Movie Edit Pro and use the stereo 3D effects to specify the format (i.e. side by side at half/full width or stereo pairs), as well as adjust the stereo alignment (horizontal, vertical, and rotation).

To display your 3D imagery while editing, Movie Edit Pro supports several playback modes to preview your movie, depending on your monitor’s technology: polarizing filter for passive glasses, active shutter mode (i.e. for the NVIDIA 3D Vision system), and color anaglyph for viewing on standard monitors with red/cyan glasses.

When you finish editing, you can export your 3D movie as usual: save to a movie file to play on your PC, upload to share online, or burn to DVD or Blu-ray disc. Movie Edit Pro supports output in anaglyph format for viewing on any standard display to TV, and in side-by-side format for appropriately enabled display devices. Since 3D formats can vary, Movie Edit Pro provides the controls in the export dialogs to specify the output format, resolution, and aspect ratio as required for the target display.

But the depth in MAGIX Movie Edit Pro 17 is more than 3D, it’s in the astounding array of features and options that you can uncover in the menus, under the fairly conventional (albeit sometimes idiosyncratic) video editing interface. The main interface has buttons for the three basic modes (Edit, Burn, Export), but the Tasks menu then has eight categories, each with up to six nested tasks, and plus the Edit menu adds four Wizards: Slideshow Maker, Soundtrack Maker, plus the new Travel route animation – showing the path of your vacation trip as a vehicle on a map. And even the Online menu has five options, including the MAGIX Online World for shared websites, CATOOH online media market, MAGIX online album, and upload to YouTube / Vimeo / Facebook.

For more options, the right-click menus can have 15 to 20 entries (plus pop-out sub-entries). And the Program Settings dialog has six tabs with an astounding profusion of options, including audio and video playback optimization, direct control over eight folders used for storage, 20-some options for video and audio processing, system configuration, templates for arranging the application window display, and video display hardware acceleration options. Whew!

Oh, and for deeper video work there are features including primary and secondary color correction, keyframe animated effect masks, ad search and removal, and batch import and conversion. And for detailed audio work there’s an Audio Mixer for detailed audio editing, live mixing with a mouse or MIDI controller, automatic beat detection, and extended audio enhancement and cleaning effects, and ProDAD plug-in support.

MAGIX also has bundled additional tools for working with 3D, including the proDAD Heroglyph Rapid 3D title and text editor and Reallusion iClone for 3D character and even scene animation. Yeesh!

The bottom line is that MAGIX Movie Edit Pro 17 (regular and Plus) is an impressively powerful video editing tool that’s stuffed with deep technology at consumer pricing. The interface is responsive and not overwhelming, although the performance was a bit sluggish and stuttered a bit on 3D HD material.

Just be clear that Movie Edit Pro is not for easy entry into video editing; it’s for people who want to dig in and do fun and amazing work. Working with Movie Edit Pro is something of exploration process, as you need to keep digging in the menus – and dialogs and wizards and Help file – to first find, and then explore and try to understand new features. The program does include a few introductory videos to help get you started, and the Help file does provide some overview material, but it’s left to the user to work out the step-by-step process, based on the sometimes confusing terminology.

But for people who want to explore and grow their movie making skills, Movie Edit Pro should keep you occupied and exploring for quite a while. MAGIX offers a trial download of the Plus version so see for yourself how it could work for you.