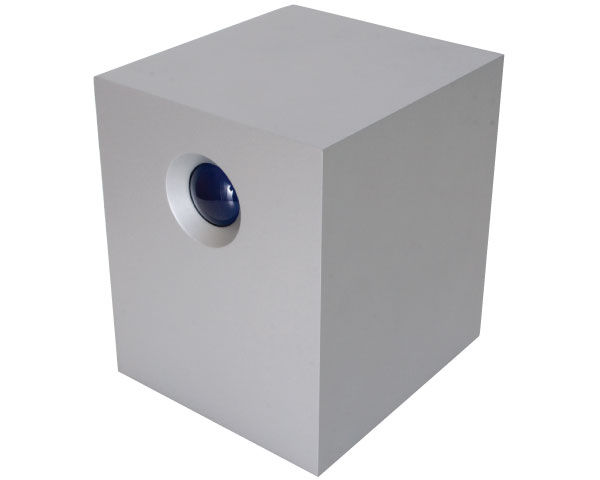 The LaCie 4Big Quadra is an external storage device capable of holding up to 8TB of data. It comes in three flavors: 4TB($800), 6TB($1100), and 8TB($1400). For those looking for even more storage the 4Big Quadra can be chained together with up to four units making a max capacity of 32TB. Since a standard computer case can only hold up to four hard drives, it is important for a video editor to have external storage for all their HD footage. RAID is also an important feature for those who don’t want to lose their video if a hard drive fails. When a hard drive fails on a typical desktop computer, all the data is usually lost. A RAID is when data is copied and stored on multiple hard drives instead of one. Having a fast external storage device with RAID is essential for those serious about editing resource intensive HD footage.

How Does it Work?

The 4Big Quadra is easy to use and requires very little technical knowledge. It comes with an easy to read setup guide with pictures and simple instructions. For the novice users all that really needs to be done is plug the unit into the computer and partition/format the drive. The more advance user can choose one of the various raid options. The unit supports Raid 0, 3, 5, 10 and the choice of having a hot spare (a backup drive in case one fails). In the case of a hard drive failure a red LED will flash indicating which drive is bad. If the unit is setup in a raid all that needs to be done is remove the bad drive, put a new drive in of the same size, and the unit will automatically rebuild the raid. In raid mode the device will still work when a drive has failed but at a decreased speed. The device also ships with a backup utility for PC called Genie Backup Manger Pro and a backup ultilty for Mac called Intego Backup Manager Pro. The software is nice and easy to use but for video editing purposes it is not necessary. 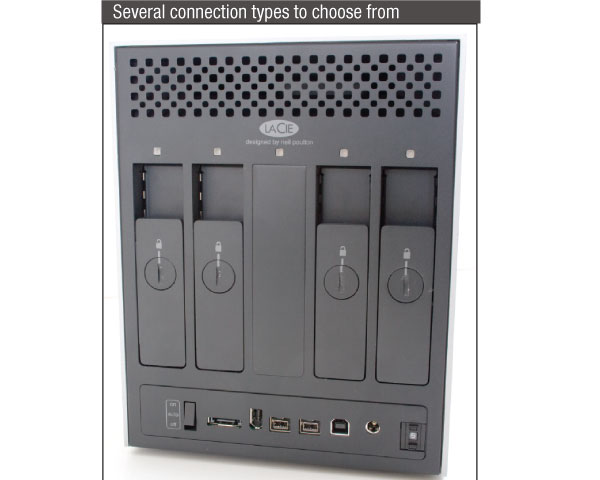 The LaCie 4big Quadra designed by Neil Poulton is a very simple device. The outside case is made of thick aluminum and connected to the internal casing with four hidden screws. On the front of the case there is a large blue button that serves as a shortcut button for backups. At the rear of the case there are 4 removable hard drive bays with LED’s to show the status of the drives. Each hard drive bay can be locked in place, preventing drives from coming out when they shouldn’t. At the bottom of the hard drive bays are the interface options: USB, Firewire 400, 2 Firewire 800, and eSata. Internally there is a 120mm fan and a basic motherboard with four Sata and power connectors. The power supply for the unit is an 80-watt external power brick. The only thing that could improve the design of this unit would be integrating the power supply into the unit. 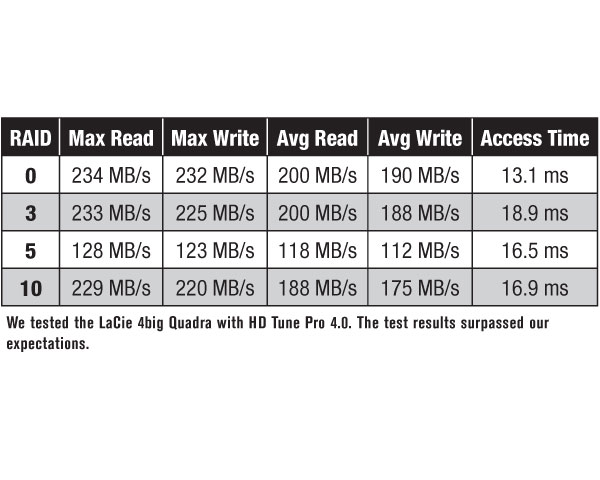 To test the speed of the unit Blackmagic’s Disk Speed Test program was used. This unit is so fast that it maxed out USB, Firewire 400 and Firewire 800. To use this unit to its full potential eSata is the only choice. The overall eSata benchmarks are rather impressive. In RAID 0, 10, and 3 the unit sustained 200-230 Mb/s read and write speeds. RAID 5 however, showed a drop in speed with read and write only at 100-120 Mb/s. Even in Raid 5 the speed is still faster than a typical hard drive. In comparison a standard 1TB drive has an average read of 100 Mb/s.

There were a few minor issues with the product. In the manual it stated to hold the front button 2 seconds to change the RAID which did not work. On their website it was corrected to hold the front button for 15 seconds which did work. It is important to note that 64 bit Vista with SP2, 64 bit Windows 7, or Mac OSX 10.5 is needed in order to recognize over 2 Terabytes of data. The drive could be broken up into multiple partitions to solve this issue with a 32 bit OS. It is also very important to get an eSata card to utilize the full speed of this unit. Be careful when purchasing an eSata card as not all of them can handle 230 Mb/s.

For anybody who needs a large fast storage device this is the perfect solution. At $800 the unit is a bit pricey and there are of course cheaper options but you get what you pay for. The bottom line is there are not many storage devices available with all of the interface types, built-in RAID, and fast throughput that the LaCie 4Big Quadra offers.

The LaCie 4Big Quadra is a high performance storage device perfect for the video editor working with HD footage.