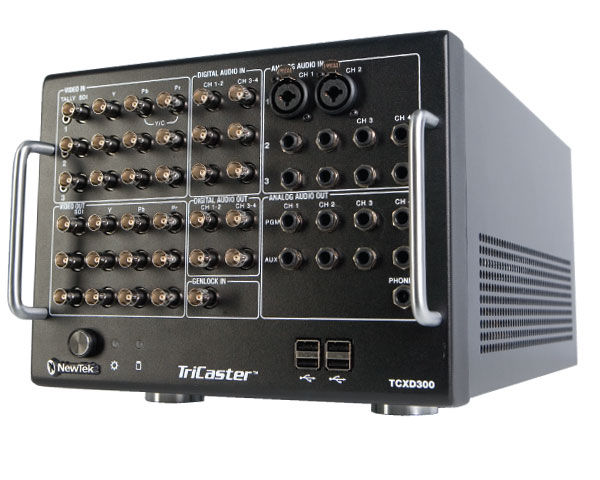 Covering an event as a live multi-camera production used to be the exclusive turf of the networks, but today we can see good-looking live HD video content streamed into people’s homes created by more people than ever. Now, video producers are finding ways to join in the live TV revolution through the Internet. NewTek has been making waves over the last few years with its TriCaster family of products, and we had a chance to look at the newest HD incarnation, the TriCaster TCXD300. This TriCaster is a compact HD production studio turnkey system that fits in a backpack. It includes a multi-input switcher, green screen keyer, virtual set generator, real-time streaming system, and more tools to make TriCaster an all-in-one production center. 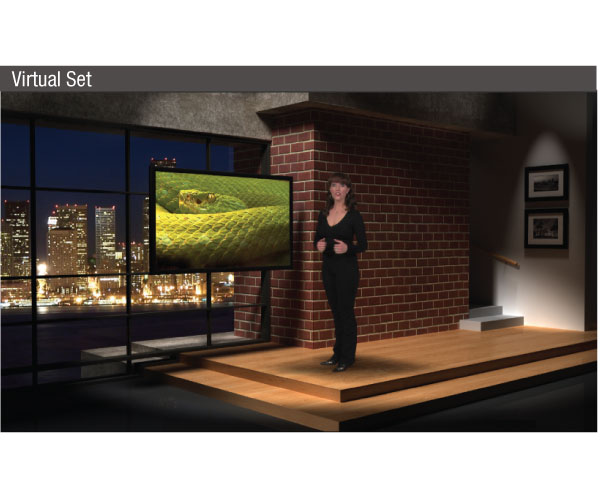 To get started in a hurry, there is a quick start guide in addition to the full manual. You also get a box of various adapters, a “TriCaster Crew” T-shirt, and a training DVD starring NewTek Director of worldwide training Don Balance. Not only will this allow old and new users of TriCaster up to speed on the new interface, it’s a great way to rapidly prep a crew that’s new to live video production.

At $15,000 the TriCaster TCXD300 is positioned as a professional device, though its jargon-lite workflow increasingly finds it in non-pro video environments. At its root, TriCaster is a live production tool, heavily optimized for operation by a single person or small team. Within minutes of opening the box, I was switching between three cameras, adding overlays, and even successfully keying talent (using a hastily lit green screen) into a live virtual set.

Additionally, you can create layered combinations of multiple inputs and overlays and save these as a “virtual input”. Virtual inputs are an important feature. On past jobs, I’ve set a live split-screen effect between two cameras, but could not neatly switch to and from each input. Virtual inputs allow you to set up effects ahead of time and tie them to a single switcher button. 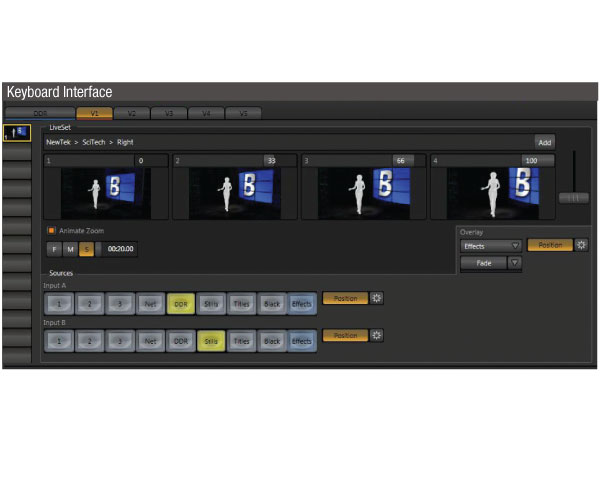 Any of the video assets you mix together can be either SD or HD resolution. TriCaster will scale those sources up to HD in real-time using 32-bit floating-point precision, 4:4:4:4 video processing and component (YCbCrA) color (well beyond industry standard 10-bit). Besides three live cameras, you can mix in the input of other computers on your network, still graphics, video clips from the built-in Media Players, and pepper it all with graphics from the built in CG program using a pair of downstream keyers. Every one of these inputs has its own proc-amp for color correction, as well as controls for sizing and positioning each source. This is a crucial addition, especially for positioning keyed talent into place on a virtual set without having to adjust the physical cameras. Making corrections like this while on set during production can save hours of post-production work. There is also a final proc-amp stage to adjust the master video output.

All of these special settings, including CG pages and other customized project elements, can be saved as a preset within a project bin on the TriCaster screen. This is especially beneficial in an environment where many different shows are being made on the same TriCaster. In order to maintain each project’s specific look, simply click on a bin to quickly recall all of your settings.

Even with 18 hours of HD video storage space built in to the TriCaster TCXD300, you’ll eventually need to back up all that data. The TriCaster TCXD300’s backup utility automatically collects all the elements associated with a project (including media clips, CG pages, stills, etc.) into a single ZIP file for archival purposes. The TCXD300 has an eSATA hard drive port on the back allowing you to connect to an external high capacity hard drive for backing up projects.

For those of us who work on budget-challenged projects, one of the greatest challenges is creating a visually pleasing set. Green screen chromakey effects and virtual sets are a good solution, but there have always been significant technical challenges to getting a green screen to work right, and pull off the illusion of a virtual set.

The TriCaster TCXD300 has a very forgiving keying system. It is not using legacy chromakey technology, but an all new version of the proprietary LiveMatte keying system. Lighting has always been crucial in green screen work. Using TriCaster’s LiveMatte feature (a separate LiveMatte key is available for every video input), I got a very good composite after carelessly throwing a green backdrop cloth against the wall, and using poor room lighting for illumination. The green backdrop had wrinkles and ugly shadows, but the TriCaster didn’t flinch. TriCaster has included virtual sets in the past, but this model introduces virtual camera zooms while your talent is keyed into the scene. This addition adds a greater sense of dimension and realism, aided by a real-time blur effect to simulate camera optics while you zoom. Remember that all of this is real-time, and can be streamed or broadcasted live.

One curious choice is to have the LiveText CG program run entirely separate from the Switcher environment. The switcher has an extensive list of templated lower thirds and titles in a variety of styles that can be easily customized on the fly by resizing text and choosing new fonts. To create your own templates for projects, or for more elaborate CG design and control, you have to exit the switcher to launch the LiveText character generator. NewTek’s current solution is to offer LiveText as a standalone program to run on a separate computer networked to your TriCaster, but at nearly a thousand dollars it’s an expensive proposition. I’d like to see LiveText simply open as a window on the TriCaster’s switcher interface.

Over the years, different hardware and software solutions have all promised a “studio in a box”. The TriCaster TCXD300 is one of the few that actually delivers on that promise through all of its facilities, and also quite literally through the virtual set system. At this price, we’ll likely see a new breed of video entrepreneurs become Internet impresarios controlling both the live production and broadcast of their own shows. The TriCaster TCXD300 is also a versatile all-in-one solution for community media centers, local television, corporate webcasting, schools and more.

Tightly integrated system that works right out of the box. The portable TriCaster TCXD300 offers unprecedented power, pound for pound.

Bohuš Blahut owns and operates a film and video production company and is an independent video producer, filmmaker and educator.