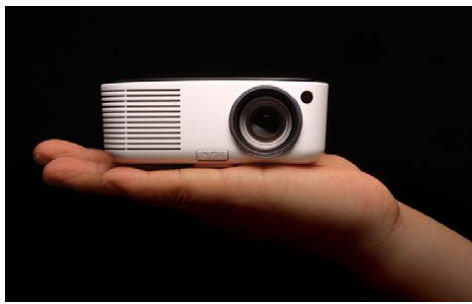 Easy to Use Mini Projector

If the BenQ Joybee GP1 Mini Projector is anything, it is an easy-to-use projector. It is designed to be moved around and set up over and over again. It has numerous features to help even the modest tech consumer create a mini home theater wherever they want.

Except for being tethered to a wall outlet for power, this little projector has great dexterity; able to move from room to room with ease. Aside from being too short the included A/V cable works just like you’d expect. The GP1 was able to project the output from two different game consoles (a Microsoft Xbox 360 and a Nintendo 64) with sound just by plugging it in and turning it on. Projecting a laptop screen was just as easy: plug it in and go (though on most laptops, you need to enable the secondary display). In a poorly-lit room with the lights turned on, the GP1 was able to project a good, clear image on a wall from five feet and a pretty good image from ten feet. With the lights turned down, the colors really pop.

Two features that turn this simple projector into an easy-to-use projector are the auto keystone feature and wall color correction. When moving this projector from room to room and from house to house, there are going to be discrepancies in wall color and placement of the GP1 with respect to the display surface. To account for these differences without having to change all of the setting every time the auto keystone feature detects the angle of the projector so you get a uniform square picture every time, no matter if the screen is high on the wall or low. The GP1 also has a neat color adjustment feature called Wall Color Correction. Instead of playing with the saturation, hue and white balance to adjust the colors every time for different wall colors, the GP1 has five built in wall colors so depending on your shade of wall the colors are always as accurate and bright as possible.

The easy-to-use features of the GP1 worked just as described. The auto keystone was very accurate at detecting the angle, making sure that the projected image was square at the corners. This only works when aiming at a wall, but if you have really high ceilings, it will still be able to correct the stretch so it doesn’t need to be mounted on the wall or ceiling-a coffee table will work just fine. If you want to aim the projector at the ceiling, it helps to turn off the auto keystone as it will get a little confused. With the limited wall color selection while testing, the built in corrections seem to work pretty well. On either a bluish or yellowish white with the proper setting, all the colors were still clear and vibrant.

According to the press release, the Joybee GP1 Mini Projector is the “World’s First LED Pocket Project with Integrated USB Drive.” It may be one of the first mini projectors with a USB port to plug in peripheral devices, but it is not going to fit in any of my pockets any time soon. It is a far cry, in size, from any of the pico projectors that have started to hit the market in 2009, which are comparable in size to a cell phone, whereas the GP1 is more like a sliced bread sandwich stacked tall.

After you squeeze the GP1 into your pocket, make sure you have more pockets for the power cord, which has a decent sized power brick; as well as the A/V connector, if you’re not going to use the USB port. The GP1 does separate itself from the pico projector crowd as its brightness is claimed to be ten times greater than that of any other pico projector in the market to date, and obviously with the capability to play files from USB flash drives. Not to mention the myriad of traditional home theater and gaming technology, and other portable devices including digital cameras, PDAs, and smartphones with A/V outputs and even iPods and iPhones (via optional dock).

The USB port can be very handy once you can get the file type right. It took quite a while to get a video to play from a USB flash drive. First an attempt was made to encode a typical .avi, which the GP1 was unable to play. After a longer look at the Quick Start guide that was provided in the box and some internet research, Arcsoft’s Media Converter, that was supposedly on the user manual CD or can be downloaded for $50, was recommended by BenQ to convert the files. Since it wasn’t included I installed an old version of Arcsoft Media Converter, which seemed to have limited functionality as it was provided by a pico projector install CD, which wasn’t exactly able to match the required codecs and never provided a good file for the GP1. There was clipping in the audio when recorded as avi with uLaw audio codec and the IMA ADPCM codec was not the expected PCM 8-bit/16bit.

There is a solution. In the press release it was suggested that Format Factory from www.formatoz.com, which is a free download, would convert the files properly. Following the directions, the resulting video files were of good quality and the sound worked perfectly. It seems like this software should be suggested somewhere in the documentation, or maybe the Arcsoft software is on the retail units’ user manual CD and is easy to use. For now we have instructions on how to use Format Factory for the GP1.

Compared to most regular size projectors, this mini one is smaller in most aspects but that doesn’t make it worse. It is smaller in size, power consumption and brightness. The power efficiency is obviously a good thing, but it comes at a price of reduced brightness. Still it has Texas Instruments DLP technology, which uses mirrors to create images, and has time and again proven itself to be very powerful with bright and crisp images. The reduced brightness doesn’t take away from the projector, it is just catering to the assumed applications, where the image probably isn’t going to be projected across a conference room with the lights on, but on a wall in a living room.

A couple of shortcomings haunt the otherwise well-made mini projector. The buttons on the unit have posed a hurdle at times trying to change a setting or just start playing. It has a very hard time detecting the finger, since it’s a touch sensor, not a tactile button. It did seem to respond better with a slightly moist fingertip as opposed to very dry/slippery hands. The remote is much easier to use. Also the extendable prop at the front to lift the image higher on the wall is a little off-center leading to a crooked image. This is easily fixed with a small shim of paper or anything lying around.

The price tag, $499, is pretty reasonable, considering you have the potential of a very big screen that you can take with you and have set up in a matter of minutes. When connecting to a laptop especially, it is very obvious that the A/V cord is a little too short and can be kind of tricky to set up without a large, flat surface for both devices to sit on. The projector doesn’t seem to mind if you use it for a few hours at a time, as one would expect it to play movies with ease and it does a splendid job of that, but the unit can get pretty hot when running for an extended period of time. The casing is nice-looking plastic so it probably won’t burn you, but just be careful.

* Optional accessories may vary by retailers. Please contact your sales dealer for purchase.

The BenQ Joybee GP1 Mini Projector is an easy to use projector with fast setup times, making it perfect for bringing it to a friend’s house and enjoying a big screen an any spare wall.

Paul Kirpes is the equipment tester for Polder and One Media Player Per Teacher program.