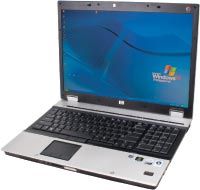 Originally, the word laptop and video editing would never go together. Laptop graphics were usually onboard, used shared memory, and had limited capabilities. Recently though, NVIDIA and ATI have made high-end video editing cards that fit into a laptop’s PCIe slot, resulting in a laptop with the editing capabilities of a desktop.

HP’s EliteBook 8730w laptop is very powerful, but fits into a small form factor. It is 1″ tall, 15 1/2″ wide, 11″ long, and weighs 8 lbs. It comes with a 17″ HP Dreamcolor LCD that displays 1920×1200 resolution. Unlike most laptops, it’s keyboard includes a 10-key number pad and fingerprint reader. To top it off, the laptop has just about every kind of input/output device needed; Blu-ray Disc drive, 4 USB, eSATA, FireWire, SD/PRO/MMC/XD card reader, Bluetooth, Gigabit Ethernet, 802.11n wireless, a dial-up modem, HDMI and SVGA.

Internally, the computer has an Intel Core 2 Extreme Q9300 processor, featuring four cores running at 2.53GHz. There are two memory sockets; one socket ships with a 4GB stick, however, only 3GB of it is available with Windows XP. Using Windows XP 64-bit or Vista 64-bit will allow full use of the 4GB. The graphics card in our test notebook is a NVIDIA Quadro 3700m; the lower-end system comes with an ATI FireGL V5725. The motherboard uses an Intel PM45 northbridge and ICH9-M southbridge chipsets. It comes with a single 7200 rpm SATA 3.0Gbps Fujitsu hard drive; it is also possible to remove the optical drive to add an extra hard drive. This unit comes with a LG Blu-ray Disc rewritable drive.

The case is designed to take a beating; it has a hard plastic outside and a magnesium alloy inside. The outside of the screen has a durable brushed aluminum shell that is nearly scratch proof. Between the LCD and keyboard there are lots of pads and strong clamps to hold the LCD down. Overall, it has a very durable design so when this laptop is dropped the chance of damage is minimal. On top of that it looks very sleek and professional.

One of the new features this laptop boasts over any other laptop is HP Dreamcolor technology. The major difference between a standard LCD and a HP Dreamcolor LCD is the LED RGB backlight. What this means is on top of the color range the LCD can display, the backlight can be adjusted to provide more accurate color. The HP Mobile Display Assistant lets you select preset color ranges like Adobe, sRGB, or standard. There is also a setting to enable the Ambient Light Sensor that adjusts the backlight depending on the current lighting. For the average user this isn’t a huge advantage. For a video/image editor, accurate color is a big deal. Attempting to configure a standard 24-bit LCD to look the same as a printed image can be a major ordeal and true representation can never be achieved. The goal of Dreamcolor is to eliminate this; the image seen on the LCD is close to the image seen when printed or on the TV. In short, the Dreamcolor LCD is brighter and has custom adjustments for more accurate color. Currently only one HP LCD and this laptop utilize this new LCD technology. The Dreamcolor LCD option is an additional $400 versus the standard LCD option.

HP advertises the battery life for this unit at around four hours; this is most likely for the base unit. When testing real world battery life: at 100% charge with stand-by and monitor shut-off disabled the laptop was able to run for two hours. Different results could be achieved by turning the monitor brightness down. While the laptop is running under a load, like rendering a file, the battery life drops in half to one hour. The battery charge time was roughly one hour with the laptop running. Considering the small physical size of the battery and the 150w power consumption the battery life is good.

Compared to most laptops available, this machine is quick. It will boot into Windows XP in 50 seconds, while some high-end workstations can take up to two minutes to boot. The 7200rpm laptop hard drive performs close to a standard desktop drive. Using HD Tach the average read was 55MB/s and a random access time of 15.3ms. A nice desktop drive can achieve 100MB/s average read and 13ms access time while the average drive is around 70MB/s.

After Windows XP was fully loaded there were 56 processes running and 500MB of RAM being used, a huge jump considering XP runs with 20 processes and 200MB of RAM with a new install, though the laptop’s performance was not noticeably hindered. Still, consider disabling most of these programs since they are not needed. The extra 300MB of RAM can help when editing.

When testing using 3DMark06, the system attained a score of 14060. Performance-wise, it’s close to the new Intel Core I7 with a GTX260 that had a score of 15700. On PCMARK05 the system attained a score of 8232. In the graph it can be seen how the system compares to others in the market. The 4GB DDR2 800MHz memory clocks in at 5681MB/s read and 1831MB/s write, not very well by today’s standards. In comparison, dual-channel DDR 400 clocks in around 5400MB/s read and 1750MB/s write. It would be better suited for a mobile workstation to be using DDR3 instead of slower DDR2.

For pros in the field looking for a video editing solution, this is it. This unit will stand up to the torture of being used in the outdoors. There are no other laptops available with color-accurate screens. The performance of this laptop is near that of a high-end desktop workstation. Also, this laptop can be had at half the price by configuring an ATI FireGL V5725 and dual 2.26GHz processor.