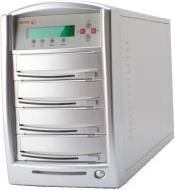 Not your Daddy’s Copier

When it comes to disc duplicators, it’s a topic that we could dismiss easily enough. “Ah, it’s all been done.” Sure, they all pretty much do the same thing – make copies of DVDs (or CDs, or Blu-ray Discs, if so equipped… whatever). However, Vinpower (licensing the Xerox brand name) has added a few new wrinkles that come through in the D103 duplicator.

As with many previous tower duplicators we’ve seen, the interface is simple: a membrane keypad and green-backlit dot-matrix LCD display. Unlike a few others, though, it has quick buttons for getting directly to copying, testing, speed selection and choosing the source to duplicate.

So you need exactly 37 copies of the latest project for distribution? No problem. When you load the D103, you can activate a counter that will keep track of how many discs have to be burned and the number of good copies. It’s handier than it sounds – in our tests, we found it quite useful when we needed to make more discs than we can count on our digits.
You also get a lot of flexibility over the source of those 37. (By the way, 37 is just an arbitrary number – the counter can handle up to 9,999, but you probably don’t want to make that many copies unless you’re by yourself and feeling particularly bored, or you have an assistant and are feeling particularly cruel.)

The copies can come from a non-copy-protected source disc, a disc image that you create with the duplicator (which gets stored on an internal hard drive) or an .iso image you can send directly over to the duplicator via a USB cable attached to your PC. It’s a very simple proposition to use a source disc, and it’s also easy to create disc images with the duplicator. Connecting a PC via USB is a little trickier, but it’s just one menu option away. You also have to install a special – but small – piece of software to manage the contents of the hard drive. Strangely, you have to turn off the USB connection in the duplicator’s menu before the duplicator can see the hard drive again – otherwise only the computer attached can see the hard drive. We successfully burned a few copies of the extremely-useful Ultimate Boot CD to test this capability, and it worked great.

You can also assemble your own audio CDs with the duplicator, using ripped tracks as a source. The procedure looks a bit more involved than the experience you’d have using, say, iTunes, to get the same job done. We didn’t test this feature, but we thought it interesting enough to mention here.

The D103 includes one DVD-ROM drive that acts as the source drive. The primary difference of this drive from the duplicator’s other three drives is that it is at the top of the duplicator, and the front bezel is different. Our duplicator shipped with an Asus DVD-E616A3 DVD-ROM drive, three Pioneer DVR-115D DVD burners and a Hitachi 160GB parallel ATA hard drive for storing disc images.

The hard drive brings an interesting change to users who are used to duplicators without hard drives. First off, that power button at the bottom of the device? Don’t just press it, even though it’s a simple push on/push off switch. Something bad could happen to the hard drive. The approved procedure is to get to the duplicator’s idle screen, then select Shut Down. This does a quick check of the hard drive before approving the shut down – then you push that switch to actually shut down. A better way to pull that off would be to use soft power, where the hardware can tell the power supply to shut down by itself – the same thing any computer built in the last 10 years can do.

The duplicator is not small, by any stretch of the imagination. We took a look inside to see that a lot of the case is air space. For a duplicator with more drives, that could make sense from an air circulation perspective. The power supply, circuit board and plenty of cables take up the rear area. We wonder if any redesigning could happen that would bring the power supply and controller closer to the drives to make for a svelter duplicator. That, and a couple of 120mm fans would be fairly cheap to add.

If heat is a worry, another idea that we would like to foist upon duplicator manufacturers to advance the field is to allow you to spin up the hard drive selectively as needed.

That said, the Xerox D103 works very well. It’s a lot more refined than a lot of duplicators we’ve seen in the past. There’s room for improvement, but it’s still a solid choice.

A great choice in a duplicator, particularly for shorter runs.