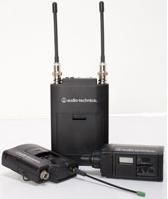 Can You Hear Me Now?!

Admit it. In the past, you’ve done more than your share of shooting with a low-end VHF wireless mic that picked up every bit of RF (radio frequency) flotsam and jetsam and sprinkled static all over the best shots of the day. Or maybe you’ve never even experienced the mixed blessing of hanging a wireless mic on the “talent.”

The 1800 Series wireless system by Audio-Technica may provide the stylish solution you’re looking for. It definitely goes beyond the “hobbyist” level of audio equipment. The components don’t look or feel like they came from the local Toys-R-Us.

Quality always comes with a price. If you paid $800 for your last camera, it might be a shock to think of almost $1,800 for a wireless set-up. Fortunately, the street price is down around $1,300. Even still, the weekend shooter may end up turning to economy units available for a fraction of the cost.

We sampled the ATW-1823 package, which included the two-channel receiver, the body-pack transmitter (with lapel mic) and the XLR plug-on transmitter for use with the handheld mic of your choice. This combination lends itself, among other things, to the reporter-on-the-street shooting style. The ever-present lapel mic guarantees the interviewer good sound, and the momentary victim gets the microphone-in-the-face treatment. Great fun.

The first thing to know about the 1800 Series is that it operates in the UHF (ultra high frequency) range. This makes it more desirable than a VHF system, because there is less interference in that range, and the all-powerful FCC allows for a stronger output from transmitters. Audio-Technica also adds the electronic brew they call Tone Lock squelch. The transmitter infuses the signal with a “signature.” The receiver ignores incoming RF that doesn’t know this secret Audio-Technica handshake. Does it work? We’ll get to that later.

The next thing you want to know about the receiver is that it has two antennae. Woohoo! And, more importantly, each antenna has its own separate tuner circuit. Who cares? You do. This makes the system a “true diversity” receiver. In UHF, the radio wavelengths are really short. Big differences can happen in short distances. Antennae even a few inches apart can see the signal very differently. A true diversity receiver switches, as needed, between its two antennae, to continually get the best signal. Diversity is good.

Hundreds of selectable frequencies allow fine-tuning that’s just not possible with lower-cost systems. If a nearby TV or radio station spills RF into a frequency you planned to use, try a dozen others. You’re bound to find a couple that are nice and quiet. The same goes if you and a DJ are using wireless mics at the same wedding.

We like it when equipment comes in a metal case. It just feels good. And it gives one the hope that, if a company is willing to invest in tough housing, maybe it cares about what’s inside. Audio-Technica gets a solid A- in this regard. The receiver and the plug-on transmitter have mostly metal cases. The body-pack transmitter has a plastic case, but this may not be bad. If it needs to be clipped to the back of an elastic waistband, two pounds of cast aluminum may not be a good idea.

The choice of connectors impressed us also. Everything that’s important locks. The plug-on transmitter has a screw ring that tightens securely against the handheld mic. On the receiver, the antennae have BNC connectors, and the audio-outs are mini-XLRs. Admittedly, the external DC power input doesn’t lock, but compatibility is more important. Also, the 3.5mm monitor output for the headphones doesn’t lock, but that doesn’t count, because you should be monitoring the camera, not the receiver.

The body-pack transmitter has a screw-in antenna. It also uses the very neat HRS-type connector for the microphone. This little gem is a four-pin, push-till-it-clicks connector. If you’ve ever had to stop a presentation and walk up to the speaker, asking if you can stick your hand in his pocket to re-connect his microphone, you’d appreciate this. This locking connector is great. The only drawback is that you’re stuck with needing mics with HRS connectors. That handful of 3.5mm lav mics in your kit won’t work. But it’s probably a fair trade-off.

The small sliding covers on the transmitter controls add to a sense of security. A bumped power switch or frequency setting can lead to the unwelcome scenario just mentioned.

The flexibility on the audio-out is great. The receiver sends the channels out with two XLR cables. Each channel has a separate pot to adjust line level. You can mix the channels “in” with the channels “out” or send them separately. You can monitor each line-in independently, and a thumb wheel adjusts the monitor level.

The Audio-Technica product info touts the “backlit LCD panels.” Well, the backlight on the receiver works well and is a very nice feature. But, unless your eyes have adjusted to total darkness, the light on the body-pack transmitter is lacking. The light on the plug-on is non-existent. Not a big deal, but they were the ones who brought it up.

So how does the 1800 Series do in the real world? Nicely. We tested both transmitters indoors and outdoors. They behaved very similarly to one another, and we tried a few frequencies for variety . . . without much variation. We hooked up to a Sony prosumer camcorder via a BeachTek adapter. We plugged the plug-on transmitter onto a Shure SM57.

Indoors, the signal was still strong sixty feet and three walls away. It wasn’t until we asked our subject to walk out of the building and into another over 150 feet away that things started to break up.

Outdoors, with a clear line of sight, we were slightly disappointed. The specs claim 300 feet of operating range. The signal was clear at 200 feet, but we started getting serious dropouts at about 250 feet. Frankly, since the specs said 300 feet, I was hoping to get to 300 feet on a clear day in the rurals of the Sacramento Valley, maybe even 400. I guess that was California dreamin’.

The good news is that the Tone Lock seems to do its job well. On the edge of useability, there is a little bit of static, but a dropout generally results in a respectful moment of silence, not an onslaught of white noise. When you have the signal, you have it securely.

We also wanted to run the “true diversity” through its paces. We took the system into a metal warehouse, hoping to create some multi-path interference. With the subject 40 feet away, the LEDs indicated a lot of bouncing back and forth between the two tuners, but the signal was as clear as a bell.

Then we asked the subject to place a tinfoil cap in the shape of a Viking helmet on his head, saying this would induce greater interference. As far as we know, this had no validity in the testing, but laughing that hard really broke the monotony. The signal was still strong.

Ideally, the best wireless microphone system is the one you are unaware of. The Audio-Technica lapel mic was crisp and bright. The Shure mic sounded as though it were plugged straight into a mixer. What else could you ask for?

A high-end wireless system that will give good service for someone who has graduated from being a hobbyist to being a prosperous professional.

Greg Robinson is the owner of an independent production company.