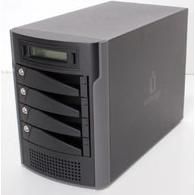 Get your RAID on

The previous iterations of Iomega brought some revolutionary storage products into the limelight. The Bernoulli Box, their first major product, was the first high-capacity removable disk (well, “high-capacity” at a time when 40MB was considered huge, anyway). And you certainly remember the Zip format, right? Well, you can still get Zip drives and cartridges, but Iomega has diversified a bit to include other storage devices in their product line, including the REV drive (see our review of the Grass Valley version of REV in the November 2006 issue), NAS devices, DVD burners, a portable media player and external hard drives.

Iomega markets the Power Pro as an external hard drive, but that simple name belies the power under the hood of the device. It includes a number of features that would put the drive near the top of the short list of a serious user looking for a quick drive that is easy to start using quickly, while retaining a measure of portability. Pre-configured as RAID 5 and pre-formatted as FAT32, the Power Pro allows practically any Windows or Mac OS user to hit the ground running. (You can reconfigure the drive to RAID 0 or RAID 0+1 and reformat to HFS+ or NTFS, if desired.) No drivers are needed to access the drive. The drive can perform a rebuild automatically if needed, and you can designate one drive as a hot spare to make the rebuilds commence with no intervention necessary. You can hot-swap dead drives out of the system, and there’s an audible alarm and indicator lights that show you exactly the drive’s status at all times. As icing on the cake, the Power Pro ships with EMC’s Retrospect Express backup software.

The first thing we noticed was the hex key locking mechanism used to keep the drives in place. The Power Pro comes with two blue plastic hex keys, along with a key ring. We’d recommend not putting this key on your day-to-day key ring next to the house key and car key, though – it’s hard to say how well the plastic will age over time.

If (perish the thought) the array issues an audible alarm and a red indicator appears on the drive, you would use the aforementioned key to remove the failed drive and replace it with a new one. The system would then dutifully rebuild the drive, unless you configured the system as a RAID 0 (in that case, all your files would be gone).

Our test unit shipped with four Seagate 500GB hard drives installed. Note that Iomega’s documentation states that you must use replacement drives provided by Iomega to retain warranty coverage; but when the two-year warranty expires or you don’t intend to pursue any warranty claims, the drives in question are simply desktop SATA drives mounted in the carriers.

I’ve Got the Power

When we applied power to the drive, its dot-matrix LCD display illuminated blue and noted that the device was in a normal state. You can press the menu button on the front panel to see information on the installed drives, the current RAID level, capacity of the system, firmware version, serial number, etc. There’s also a 24-hour time clock on the front panel. We attached the Power Pro to a MacBook via the FireWire 400 cable to see what it could do (other interfaces that can be used include FireWire 800 and USB 2.0 – there’s no eSATA port).

The drive showed up on the Mac desktop in short order. We dragged a couple of folders (2.35GB worth of audio and video podcasts, between 50-200MB each) over to the drive, which slurped up the files in 1 minute 44 seconds (22.6MB/sec), a very respectable speed for RAID 5 over FireWire 400 onto a FAT32 filesystem. Iomega claims a maximum write speed of 47MB/sec and a maximum read speed of 70MB/sec – these seem completely reasonable speeds to attain over FireWire 800 onto the native filesystem of your machine of choice, particularly if you reconfigured the drive to RAID 0. However, we are very satisfied with the speed of the product as configured out of the box – remember, 3.5MB/sec is all the sustained throughput you need to handle DV and HDV playback. Of course, if you intend to juggle large video files with the drive, we’d certainly recommend reformatting it before you start moving everything into it.

We’re happy to see a drive this powerful, yet so accessible and widely available. The problem at the moment is that the MSRP of the drive is on the high side (although we’re used to seeing prices of products like this fall quickly after they’ve been in the channel a while). While enclosures exist to build a system similar to this, they’re not very easy to find – and then you still have to add hard drives to make it work. If the price of the drive were closer to the $1,200 range, we’d be a lot more enthusiastic, but it still appears to be quite a good drive overall.

Data security and the potential for portability are yours with the Iomega Power Pro – but be prepared to pay for it.