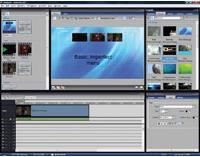 In the ongoing evolution of disc burning, we have reached the point where the latest major distribution hurdle has been overcome: the ability to burn your own full-length high-definition projects for people who don’t have computers. Roxio’s DVDit Pro HD is among the first Windows disc authoring tools that can make this claim.

The program welcomes all comers, particularly users of Roxio/Sonic’s own MyDVD, which allows projects made in that application to be opened and edited, giving users an easy upgrade path.

While all of the documentation notes that the program is designed for Windows XP (Home, Professional or Media Center Edition), we tested DVDit Pro HD on a Sony Vaio RM1 video editing computer running Windows Vista Business, and everything worked just fine.

The first thing that the program asks when you start it is whether you want to create an NTSC or PAL project. If you’re just going to Blu-ray Disc, this question will seem quite strange on the surface, but the reason the program asks has to do with one of the line items on the box. The program includes the ability to write the same project to both Blu-ray Disc and DVD – a very useful feature that has the potential to save you a lot of time (depending on the scope of your disc authoring project, of course).

We found the process to bring assets into program a bit confusing at first. The File > Import > Media option seems a logical choice on the surface, but fails to bring in anything but still images. However, there’s also File > Add Movie. This is the one you want to use for bringing in your video clips. The program is also finicky about file extensions – we had some .m2t (MPEG-2 transport stream) files captured from a Sony HDR-FX7 HDV camcorder via Sony DVGate Plus that had to have their extensions changed to .mpg before we could import them.

The arrangement of the program in its default workspace (there are a few others to choose from) made immediate sense to us. The menu bar is arranged left-to-right in order of how you will be accessing the functions beneath (e.g., Timeline, DVD Menus, Simulate, Burn). The project window contains lists of your menus, the video titles you’re using and the playlists you’ve defined in either thumbnail or tree view. To the right, a preview window lets you manipulate your menus or see the current title. Below that, a timeline allows you to manipulate your video, audio and subtitle tracks (and additional audio or subtitle tracks, if so desired).

The right-hand side of the screen includes a palette of supplied templates, images for backgrounds, buttons and frames. You can also import your own layered menus as PSD files and define the menu areas with DVDit Pro HD’s Highlight Tool. An attributes area (think “inspector” or “properties” if you’re used to tools from other software publishers) shows you practically all of the important details about a particular asset, and allows you to control pretty much everything, including menu linking, button routing and end of play behavior. If you have text selected, this is where you choose fonts, sizes, justification, attributes, etc.

The very bottom of the DVDit Pro HD window provides a bit budget tool that allows you to see how much room you’d have if you burned your project to several DVD flavors (single-layer, dual-layer, authoring, RAM or mini) or to a Blu-ray Disc. There’s also a checkbox for OpenDVD, which adds additional data to the burned disc that allows it to be edited further on another computer running a Sonic/Roxio disc authoring tool.

The first menu you define or the first clip that you import into DVDit Pro HD becomes the first play by default, which is clearly marked with text and with a big green play arrow on the clip’s thumbnail. You can also choose a different first play clip later.

We found it easy to create our own menu from scratch – we dragged one of the rather sharp-looking background images provided with the software onto the menu, and then we were able to simply drag our clips directly onto the menu. This also defined a default set of highlights onto our new buttons and set a logical button routing order. You can also see the safe title/action area for both 4:3 and 16:9 screens.

Once we burned the disc, our HD clips didn’t require much processing before they were ready to be burned. Upon playback time, though, we found that the disc we created didn’t play in Corel InterVideo WinDVD for BD for Vaio, but it could be played with CyberLink’s PowerDVD Ultra. However, we’ve had a number of odd little codec issues with this particular machine – your mileage may vary.

Overall, DVDit Pro HD is a very friendly but surprisingly powerful program that will probably do anything that you’ll ever need to do as far as authoring DVD-Video or Blu-ray Disc… at least until the next major authoring format comes along.

Realtime Preview of Motion On Menus: No

The first burning package that burns Blu-ray Discs does a great job with them.

Roxio, a division of Sonic Solutions