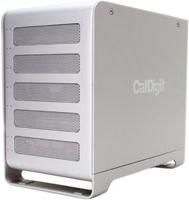 We’ve seen a ton of external storage devices come through our doors. FireWire and USB 2.0 are the most common interfaces we see by far. The relatively new eSATA interface (external serial ATA), though, has not experienced a significant amount of adoption, particularly compared to its internal counterpart (we know of very few eSATA drives in retail boxes, and only a smattering of eSATA cases marketed to hobbyists). For this reason, we were very pleased to make the acquaintance of the CalDigit S2VR HD eSATA array, a five-drive array which, along with its brethren (the S2VR Duo, a two-drive array; and the S2VR Pro, a ten-drive array), are some of the first eSATA arrays that we’re aware of.

The biggest benefit of eSATA is that the eSATA interface gives the computer access to the drives in the same way they’d be accessed if they were connected internally, instead of passing the data to be accessed through a bridge chip that translates data from a USB or FireWire bus to an ATA or SATA hard drive. This means things get done significantly faster. But more on that later.

The S2VR HD arrives in two boxes: one box o’ drives, the other box contains the empty array, an eSATA card with four connectors, an orange eSATA cable, driver software, and a quick-start leaflet.

The card (also available directly from CalDigit as the FASTA-4e four-port PCI-eSATA 3G Host Adapter, with a PCI-X version also available) is based on the Silicon Image 3124 chipset. We installed the PCI Express 4-lane card into a Gateway Core2 Duo-based system for testing. The four ports allow you to add additional drives or arrays to your system as needed.

Installing the provided Maxtor MaxLine III 300GB drives (already screwed into their custom trays) into the array was painless-it took mere moments to remove the drives from their static bags and gently slide them into place. A car door-like flap flips up to secure each drive in place, and spring-loaded captive thumbscrews keep the flaps locked in.

Upon firing up the array for the first time, we noticed that for being a box full of hard drives, it was surprisingly quiet. The array includes white LEDs to indicate drive presence and array status, and blue LEDs for each drive to indicate activity across the array.

We noticed a new BIOS screen appear briefly before Windows XP started booting, and the array did show up in our machine’s boot menu. So theoretically, at least, you could boot your system from this array.

Get Ready for This

Once we rebooted, the installation of the Silicon Image driver was straightforward. We found the necessary drivers easily on the included CD-ROM. The CD also includes S2VR Manager, the tool you use to configure and manage your array.

The leaflet, at first glance, included only Mac-looking screen grabs, prompting us to simply put the leaflet aside (we’re testing this on a PC, after all!). Strangely, though, once we installed S2VR Manager, we got a dialog box that looked strangely Mac-like. One very valuable piece of information on this sheet was the default password for the array, so if we’d known it was there it would’ve saved us a call to CalDigit.

We found S2VR Manager to be kind of picky. On the aforementioned password dialog box, you must click on OK-you can’t just hit enter after entering your password. On the main menu, there are two red buttons on the right side of the window: one is to minimize the application (well, it’s more like “windowshade,” for you old-school Mac OS 9 users); one is to close the application. Rolling over the buttons doesn’t give away which is which, like Mac OS would do. We hope future versions of the software will be more accessible to the end-user.

Once you’re logged in, you can click on your S2VR in the configuration manager to build your RAID. From this area of the software, you can also see the serial numbers of the device and its drives, the status of power supply and fan, the temperature of the device and the installed firmware version. Another screen gives you the ability to set up email warnings to be sent somewhere if something goes horribly wrong. Nice touch.

We built a performance RAID (a RAID 0, or stripe set). You can also set up a protected RAID (RAID 1, or mirror set-it’s protected, all right, but half of your capacity is instantly gone so the system can write two copies of your data) or a JBOD (“Just a Bunch Of Disks”). There was an advanced tab in this dialog box, but we couldn’t select it-only the simple choice of radio buttons and a somewhat nebulous “Turbo” setting were available. A little bit more control here would definitely help satisfy our geekly needs a lot more thoroughly. We were also a bit surprised that RAID 5 wasn’t an option-we’re aware of a few eSATA port multipliers in captivity that include RAID 5 capabilities.

After the RAID was configured, we went into Windows XP’s disk management snap-in to initialize and format the new volume. The volume formatted to 1383GB in a little over two hours.

In an interesting benchmark, we noted that the RAID handily outperformed the internal array on our test machine. The internal array averaged a data transfer rate of 98.7 MB/s with a popular benchmarking application, while the S2VR blew that score away in RAID 0 mode with its average 150.0 MB/s data transfer rate. This is more than fast enough to handle a full 720p uncompressed HD video stream. After getting comfortable with the drive, we decided to try a few tweaks, namely the instructions provided by CalDigit on its Web site for optimizing performance. We set the drives up as a striped JBOD this time and ran another test. Our maximum read speed was 233 MB/s, just as CalDigit advertises, perfectly capable of handling many different types of uncompressed high definition video.

We can recommend the CalDigit S2VR HD highly. It’s a rip-roaring fast drive for a very fair price. It’s not hard to configure, and it’s an extremely versatile unit.

While not quite as easy to configure as a USB or FireWire drive, the CalDigit S2VR HD will reward you with remarkable speed.