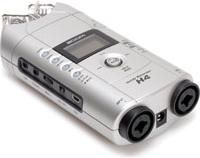 The move to HD has sparked a new debate about audio acquisition. Since HDV audio is compressed, some producers are now looking at using separate audio recorders to capture pristine audio. But quality digital audio field recorders can be quite costly. So, with street prices around $300, we had to check out Samson’s new Zoom Handy Recorder H4.

Unless otherwise noted, for all tests, we used an AKG 414B-ULS TLII studio mic plugged into the left channel powered by the H4’s 48v phantom power. We used several of the tools in Adobe Audition 2.0 to analyze audio signal performance and we made all recordings in a quiet, sound-deadened room.

Designers of any palm-sized audio recorder have a big challenge. Which features do you make easily accessible with buttons and switches and which do you hide in menus? Zoom made a good call putting key functions only one click away. The top panel features buttons that access each of the available sample rates. A simple record button and clickable thumb joystick for menu access complete the top panel.

The left side has mini 1/8″ line and headphone outputs, a headphone level dial, on-off switch, and a USB port. The right side has three 3-position switches for gain control of the two inputs and the built-in stereo mic and a clickable jog dial for further menu navigation. The top has two small condenser microphones in an X/Y configuration and the bottom has inputs for both XLR and unbalanced microphone plugs.

Quiet on the Set

The core of any audio recorder is quality. A key measurements is how clean a signal is over the noise produced by the unit’s internal amplification and processing. As we would likely use both in the field, we tested two modes of operation: one with auto gain on and one with it off. Recording and analyzing 10 seconds of silence with auto gain on, we found an average RMS power rating of “49.5dB. We found that the right channel, with no mic attached, showed an average RMS power rating of “66.5dB, with two barely perceivable frequency spikes at 8225Hz and 16420Hz. We found no published specs for signal-to-noise ratios or self-noise to compare with our test results, but we suspect this right channel signal may be the true self-noise of the H4. Samson later confirmed that we are within 3dB of their engineer’s tests.

We turned auto gain off and manual gain to high, as this was the setting we found gave us the right levels with the AKG mic. The average RMS power rating dropped to -70.7dB. To see if there was much difference, we switched to the built-in mic and selected the manual low gain setting. The average RMS power rating dropped to a very subtle “73dB. We also found a small repeating low frequency noise hump cycling at second and a half intervals during all noise tests. It varied from “34dB to “60dB, depending on settings. This is certainly acceptable, as it is only apparent during total silence and shouldn’t be a problem for most recordings.

Another possible noise source of is the AC adapter. We used the AC adapter and batteries for our tests and found no difference. Even when compared to more expensive digital recorders, these noise tests reveal the H4 is capable of producing professional quality audio.

The other major factor in capturing quality digital audio is sample rate. The H4 is capable of recording at a sample rate as high as 96kHz at 24 bits. This produces incredibly high fidelity audio but also creates large files. We filled the supplied 128MB SD card after recording 3-minutes 40-seconds at 96/24. Using the more common setting of 44.1/16, the H4 recorded about 12 minutes of audio on our same empty SD card. The H4 can use SD cards up to 2GB in size ” about 190 minutes of 44.1/16 stereo.

Two of the most usable effects for video producers are the built-in limiter and compressor. When enabled, the limiter will keep loud audio sources from distorting. We tested this by placing our test mic 12-inches away and speaking quietly then instantly shouting. The limiter prevented any, even transitional, distortion. We were particularly impressed with the performance of the compressor/limiter. We repeated the setup, whispering then shouting and even the whisper had a very strong sense of presence and the shouts were limited without sounding overly “effected.” This might be a setting you end up using often, particularly for recording voice-overs in a quiet setting. But remember, any compressor will also make quiet sections louder, which may not always be desirable.

Other Uses and Features

You can also use the H4 as an audio interface with your computer. If you have a laptop and simple audio recording software, you can connect the H4 via USB 2.0 to convert your analog signal to any of the four selectable sample rates directly to your computer’s hard drive. If your production requires a high sample rate and the cuts or takes are long, this is a great way to work around the 2GB SD card limit.

We really liked the design of the H4. It’s small and very lightweight. A few of the quirks include possible difficulty removing the SD card (which lives underneath the included tripod adapter, if you use it); the menu text may be hard to read for some people; the manual gain stages provide little real level control, but auto gain works well; and the headphone volume may not be loud enough in noisier environments. Overall, the balanced inputs, very useful compressor/limiter, overall audio quality and low price make the H4 a very attractive option for acquiring high quality uncompressed audio.

Even though it’s not very big, the Zoom H4 records professional-quality audio. But you’ll want to get a large-capacity SD card.