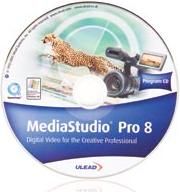 Ulead's venerable MediaStudio Pro products have gained a loyal following over the past few years. When their users sensed that the product was starting to get long in the tooth, they took to message boards, forums, and any number of other communities. Ulead heard their appeals for a new version and new features, and offered an unprecedented Public Preview version of MediaStudio Pro 8 a few months ago. The Public Preview gave way to the full version of MSP 8 shortly thereafter.

MediaStudio Pro 8's buttons and menus are now a distinct gray color, giving it a very polished appearance. The program also seems easier to use than its predecessor. Case in point: there are no more A/B roll-style track names; all tracks are numbered instead. Granted, the A/B-roll metaphor did seem easier to use in the past when we all learned how to port our video editing knowledge from tape-to-tape machines to computers; but now, many new editors will never even lay hands on an edit controller. (But we don't think that's necessarily a bad thing.) Another usability feature worth mentioning is that real-time previews are now enabled by default (although it was just a matter of clicking one button to enable real-time previews in MSP 7.) These tweaks bring MSP 8 more in line with the workflows of its contemporaries.

One of MSP's long-standing strong points is that you can import practically any NTSC video for editing. Generally, anything that Vegas or Premiere Pro can't read, MSP can handle without too much fuss. MPEG editing, too, continues to be offered with MSP, with only a few exceptions (notably on the QuickTime side, we've noticed.) You'll see MPEG editing offered in more and more products in the years to come with the growth of HDV and the new crop of tiny MPEG-based camcorders.

New features include an improved titler (borrowed from VideoStudio.) Also, for improving titles and segues, the Smart Compositor feature includes pre-made masks and motion paths for titles, which are sorted into themes. You can also bring in your own elements to allow you rapidly apply your own custom composites to your finished projects.

HDV support is now built into MSP 8. There is native HDV import/edit support, which works in concert with its SmartProxy feature. Essentially, SmartProxy is seamless off-lining: upon import, smaller proxy files are created in the background to be used during your edit session. Then, when you're ready to export to HDV, you are exporting the full HDV video. This keeps the program running quickly and responsively and the output quality very high. It's possible the next generation of computers will negate the usefulness of this feature, but it's certainly useful at the moment. It is possible to edit native HDV without SmartProxy but your minimum system requirements will be much greater.

We successfully transferred footage from a Sony HDR-HC1 HDV camcorder, although the in and out points were off by a few seconds. Ulead acknowledges this is currently a problem, and reports this should be fixed in an upcoming Service Pack, which will be freely downloadable from Ulead's Web site.

We encountered trouble importing HDV captured in other programs, however. Footage in Premiere Pro/CineForm and FCP could not be imported into MSP 8. We're sure, though, that it won't be long before HDV footage is as portable between editing apps and platforms as DV has become.

If you want to take some HDV footage with you to edit on the run, Ulead's SmartPackage feature can export your proxy files. Then, when you finish editing your project (technically, creating your edit decision list, or EDL), you'll only need to complete a few easy steps to deliver your HDV output to tape or WMV-HD output to disk.

MediaStudio Pro can now export directly to DVD, with support for both single- and dual-layer drives and discs. Basic, but usable menus (including motion) can be created without too much hassle. You can also create surround mixes and encode them in Dolby Digital 5.1 surround sound.

You can also export to a number of streaming and download-and-play formats. MPEG-1 and MPEG-2, QuickTime and Windows Media formats are natively supported. DivX and MPEG-4 output are yours with an optional plug-in. The HD export conundrum is addressed here with HDV and WMV-HD export capabilities.

VideoStudio projects can be read in MSP 8, making it easier for users to migrate to this higher-end application. Intermediate users and graduates of VideoStudio will certainly appreciate MediaStudio Pro. And for owners of past versions of MSP, version 8 is unquestionably an essential upgrade.

A powerful editor that is uniquely positioned against its competition.