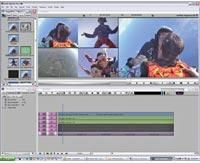 Xpress Yourself (in HDV)

It's difficult to discuss an Avid product without paying homage to the company's pre-eminent position within the professional video and film editing world. Avid's flagship video editing solution, the Media Composer, has long been the de facto standard in the film and broadcast television world–at least among those editing firms that can generate enough income to afford its $24,995 entry-level price tag.

Nonetheless, trends in the video and film editing industry have moved away from the centrally-controlled, hugely expensive, full-featured video editing suite that belongs to a major production company, and toward the less-expensive independent shop running low-cost hardware and software. A few years back, to keep up with this trend, Avid released its own (relatively) low-cost editing software, dubbed Avid Xpress. The most recent version of the Xpress software family, Avid Xpress Pro HD 5.0, is the subject of this review.

It's worth noting that Avid Xpress Pro HD 5.0 has enough bells and whistles to generate a review larger than this entire issue of Videomaker. Because we have other things to do in this issue besides discuss this product, we'll focus our review on the high points of this version of the software, and point you to Avid's Web site (www.avid.com) for further inquiries. To summarize our findings, we'll say right now that it's a real gem, worth every penny of its $1,695 price tag. Furthermore, its attractive educational pricing ($295) make it a real steal for film and television students and teachers who want an inexpensive way to learn the basics of the Avid editing interface.

When you first open the box and prepare to install the software, you'll notice right away that Avid includes an impressive bundle with the Xpress Pro HD package. Sonic Solutions' ReelDVD for DVD authoring, SmartSound Sonicfire Pro with Full Spectrum and Contemporary Insights add-on discs for soundtrack creation, Boris Graffiti LTD for titling, and Sorensen's Squeeze 4 Compression Suite are included, as are a number of useful Avid utilities.

Installation of the software is simple and straightforward, provided your computer has the somewhat beefy hardware requirements Xpress Pro HD calls for–not surprising, since working in HD is one of the most hardware-intensive tasks you can set for your desktop computer. For our test, we installed the software on a 2.8 GHz Pentium 4 machine with 1GB RAM and a 128MB ATI video display adapter.

Xpress Pro HD's editing interface will look very familiar to anyone who has done any editing on a professional-level Avid system in the past. If you have never edited on an Avid system before, you may well find the interface a bit difficult to master at first, but take heart–this interface represents a tried-and-true system that video editors have come to know and love over the years. Once you get past the learning curve, it's a very user-friendly system that's well-designed to save time and effort.

Each time you run the software, you find a Project window prompt from which you can select an existing project or create a new one. When creating a new Project, you're given a wide array of presets to choose from, among which are all standard HD configurations. (Avid informs us that native HDV presets are coming soon, but they weren't available at the time of this review.) Once you choose a preset, the program takes you to the Avid editing interface.

We commend Xpress HD for incorporating methods for working with numerous different types and resolutions of footage on the same timeline. You can, for example, line up HD footage alongside DV25 and uncompressed standard-definition footage in the same sequence. This is potentially a great time-saver, especially for fledgling post-production companies who haven't gone pure HD yet and want to incorporate piecemeal.

Also worth noting is Avid DNxHD (Digital Nonlinear Xtensible High Definition), the underlying HD encoding technology that powers Avid Xpress Pro HD. Avid DNxHD is, in a nutshell, a technology that allows manipulation of video, graphics, titles, etc. without having to deal with compression issues that can reduce image quality. Because this technology renders edit decisions in an uncompressed format, exporting projects to DNxHD makes for higher-quality output, especially for any kind of project that requires re-encoding (DVD authoring to MPEG-2, for example).

And then there's Avid Multicam Editing, a technology that allows video editors to perform one-button live cuts between up to 4 sources of footage just as though they were performing live cuts on a television show. The live cuts are then saved as an edited sequence that you can quickly fine-tune and export back to tape–another great time-saver for over-worked editors.

We could go on and on about the other great features in Avid Xpress Pro HD 5.0–features like 10-bit encoding support, metadata support and real-time effects with Avid Mojo hardware ($1,695, available as bundle for less). The only drawback to the software is its high price and steep learning curve, but we can assure you that both are well worth it, and students have no excuse because it's only $295 for them, and it's a great way to learn the industry-standard interface.

Bottom line: if you're serious about HD editing, you can't go wrong with Avid Xpress Pro HD 5.0. It's everything you would expect from Avid, and more.