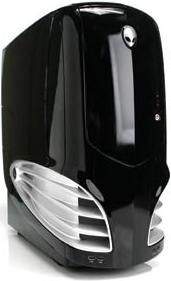 It's big, black, incredibly powerful and it ain’t playing games.

Alienware, best known for its screaming-edge turnkey gaming computers, is

Well, they’ve got it.

240GB hard drives for video and a DVD burner, this machine is ready to handle the most

For the more than $5,000 price tag, you get all the above packed into a

full-sized custom tower case with a multi-format card reader, keyboard and an A/V

breakout cable. A monitor and mouse, though, were not included. The system comes with

Setup was easy. Alienware makes it nearly foolproof with a poster-sized full color

foldout detailing all connections. Even with hooking up and configuring two monitors (up

to four are supported), the total time between taking the Alienware Roswell 5000 out of

the shipping box and first edit was less than ten minutes.

and are positioned at the end of a thick cable. Though the design looks cool, the BoB is

probably the weakest part of the system. It would not lay flat on the narrow bench top

we had when we routed it through an access hole to the tower on the floor. The V-shaped

We had no problems capturing our test material from both analog and DV sources.

Capturing from analog tape is straightforward: plug A/V cables into the BoB, open the

Matrox capture utility and begin manual capture. For our DV footage we used the batch

several audio clips from a CD and still images from a digital camera.

Premiere Pro workspace. Navigation of timelines, resizing of windows and use of editing

tools is incredibly fluid. There was no waiting or lagging. Throughout several days of

testing, only one thing we threw at it locked up or crashed the system: Adobe Encore DVD

1.5 was pretty unstable, but we feel that’s more likely the fault of Adobe’s version 1.x

software. Most of our common editing scenarios with just a few tracks of audio, video

and simple graphics did not require any rendering at all. Those that did rendered

To really give the processing performance a test, we vertically stacked three

tracks of video each with decreasing opacity so the system would have to crunch numbers.

On top of that, we added two tracks of text with drop shadows with independent 3D

were added to the heap. Not only did the real-time preview playback smoothly, but this

complex 10-second, 8-track segment rendered for output to tape at the highest quality

settings in 25 seconds. More common two- or three-track projects render in real or

For comparison, this same test took 93 seconds on an older single CPU 1.7GHz

a highly promoted feature of the Matrox card and they do work well. We still believe a

incredibly neat boxes. Every wire and cable has been carefully routed and secured to

areas where they do not inhibit airflow. Even the traditional ribbon cables connected to

the drives have been replaced with streamlined connections.

with the kind of quality high gloss finish you’d find on a Ferrari. If there is such a

thing as pride in plastic, this is it.

Conclusion
So what are you really paying for? Couldn’t you simply buy the components at discount

online vendors and put it together yourself? Sure. But people that buy these machines

are more interested in creating projects than tweaking computers. Alienware has, as they

describe and we agree, delivered performance, stability and design.

they preload onto your system. You most likely won’t need it but the toll free 24/7 tech

support is nice insurance. The only real drawback might be the price. But how much is

capable of providing the most real-time previews of nearly any system in its class.
Brian Peterson is a Communications Director with more than 14 years of broadcast video

Monitor (s) Included at This Retail Price None