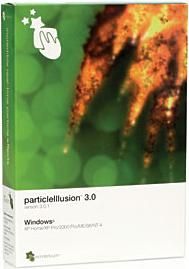 Wondertouch particleIllusion is an amazingly cool and almost effortless special effects tool. particleIllusion is for anyone who needs explosions, muzzle flashes, fireworks, waterfalls, realistic effects or psychedelic trips without the drugs. Perhaps best of all, you might not even have to hire a dedicated animator, since you can probably be up and running in an hour.

Particle effects are special effects that work by animating small individual graphics into a larger effect. Snow is a good example: one flake is a particle and the complete effect combines these into a snowy New England scene. The snow can float or icily rain down, but a good particle effect will completely fool the viewer. Random, natural motion is the key to believable effects and good applications accomplish this with a minimum of hassle.

particleIllusion comes with a few dozen particles and effects to start with, but the developer has many, many more that you can download. Each particle has dozens of attributes that you can tweak and if the effect still isn’t right, you can create your own particles from scratch.

The software also allows you to combine these in almost limitless variety, so you could combine a basic flash with a fireball and thick black smoke to create a rather convincing inferno.

particleIllusion is remarkably easy to use, which is definitely not universal with other effects generators we’ve used. You load your video into the app (which is the trickiest aspect of the program), select an effect and, after clicking the record button, you can draw your effect straight onto your video as it plays back. You can then preview the video and render it out to a finished file. Renders are very fast, often in real time.

The fast, responsive preview window will make traditional keyframe animation about as easy as possible. You can set forces that influence the flow of the particles and add blockers that mask portions of the screen from the effect. Careful placement of blockers and forces can really sell an effect in the 3D space of your video, for example, by allowing the explosion to be blocked by your heroine as she dives for cover. Of course, this requires careful keyframe work and tedious frame-by-frame animation, but the mechanics of the process are not difficult. The user interface is simple and doesn’t get in the way, although the animation timeline can get unavoidably crowded with attributes.

Throwing a visually stunning effect into your video is mind-numbingly easy, but of course the real test is when you start performing more complicated effects shots. Complex projects, with a couple of particle generators and some multi-point animated blockers, require more processing power. The application will take advantage of OpenGL hardware on your display card when available. Unfortunately, consumer display cards have a rather variable implementation of the OpenGL standard. Even low-end professional cards worked well, however. We found that about 70% of the decent consumer 3D display cards in our office worked. One computer crashed violently, however, even in software-only mode. Fortunately, you can download a trial version of the application before you buy to test for these types of problems.

Using a consumer ATI Radeon 9800-based 3D card, particleIllusion was smooth as silk with more complex projects, with realtime previews and a responsive workspace. In software-only mode on a 2.2GHz laptop, the program was totally stable, but much more cumbersome to use. Realtime previews were impossible and scrolling, zooming and modifying effects required a lot of patience. It was a lot like using Adobe After Effects, really. Before particleIllusion, however, an equivalent effect in a 3D-animation package would need an overnight render (at least). Instead of an overnight true 3D effect, you can often get away with a 2D particleIllusion effect that takes only a few minutes to render. This realization really clarified for us was how amazing particleIllusion is: with modest hardware support, the program makes complex effects editing a truly joyful and creative experience.

particleIllusion is easy to use, but it is not an application for beginners. There are no colorful buttons or assistance wizards. Although there is a small manual, a good Help system and 22 minutes of video tutorials, you’ll need to be a self-starter willing to use the Internet to really get going. If you have that kind of savvy, you’ll find what you need. For example, you won’t be able to dump your DV video into the application, so you need to render it out to a compatible format first. This isn’t unexpected for animation professionals who are used to working with uncompressed TGA image sequences, but consumer videographers might find this surprising. (DV support may be on the way, however.)

There is a $99 consumer version that is limited to a single layer (among other things), but the full app, at $399, would be a great addition to any post house that uses lots of effects. The company is growing, so look for Mac versions and plug-ins for After Effects. We can describe the effects to you and even show you some stills, but you really should go to the wondertouch Website and download some sample movies. Our final recommendation is an easy and uncontroversial one: go download the demo and try it. Check out the smoke trailer and the beautiful and surprising natural-looking waterfall effects. Just don’t blame us if you lose the next four hours of your life with the most addictive application since Solitaire.

Beginners will be blown away at the beauty of the effects and animation professionals will gasp at the speed.