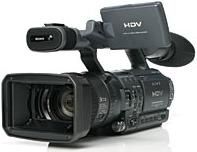 Government-mandated HD television broadcast standards and the widespread availability (if not affordability) of HD televisions contribute to creating a demand for HD content. While Sony’s HDR-FX1 is not meant to compete with $20,000 professional HD solutions, for small shops, local event videographers and elite hobbyists, high-def home video is a reality.

One of the most serious issues with HDV at this date is delivery: How will you (and your audience) watch your HD video? Everyone we know owns a standard-definition television, but very few have HD. We want you to keep that in mind as you read this review and ponder the move to a new format.

From the pictures, you might think that the HDR-FX1 is a modified VX2100: when placed side-by-side, however, you’ll find that Sony’s first HDV camera is considerably bigger. Hidden inside are quite a few software changes as well, besides the obvious HDV capabilities. Even as a mere Mini DV camcorder, there are quite a few image tweaking options and improvements that we really like over the VX2100. Would these improvements be worth the $1,000 price difference by themselves? No.

In some ways, the HDR-FX1 is critic-proof as far as subjective image quality is concerned. For example, we always test the image stabilization and talk about how responsive it is. Well, the HDR-FX1 lets you adjust the sensitivity of the electronic SteadyShot. Likewise you can perform very fine adjustments on the image, from sharpness to color phase, and get exactly what you want. An artist with an eye for this sort of thing can get whatever style, look or feel that they want out of this camera (combined with good lighting design, of course).

The back of the camera has a Picture Profile button that allows you to instantly recall six groups of image tweaks for various shooting conditions and artistic preferences. Another outstanding usability feature is the P-Menu, which allows you to put your most-most used menu items on a little one-push shortcut menu. There are also three customizable buttons that you can assign to only one of six functions, which makes these only moderately useful.

Another new feature is the shot transition button, which records a macro of sorts to automatically swing a bunch of camera settings between two points. So, for example, you could set up a cool extreme closeup to distant wideshot focus-pull-and-zoom to execute at the touch of a button.

In the HDV mode, the camera shoots a 16:9 widescreen image. It also has a 16:9 anamorphic widescreen DV mode. By default, the quality LCD is a widescreen LCD that crops in from the sides to display a standard 4:3 image.

The HDR-FX1 has a Cinematone Y mode that adjusts the gamma, which sort of makes the contrast and color look a bit more filmy, and a Cineframe mode that adjusts the feel of the frame rate (mostly by adding a subtle motion blur), while not actually shooting 24p. We tried these modes out individually and together and can say that they are aesthetically and artistically appealing at times, but, as we’ve said before and we’ll say again: only film looks like film.

The ATSC HD television standard in the US covers 18 subformats, from 640×480 interlaced (480i) through 1920×1080 progressive (1080p). In the NTSC realm, the HDV format supports three HD picture formats, in addition to the standard definition DV format. The three HD formats are 1080i, 720p and 720i. While the first JVC HD cameras support all three variations, Sony’s HDR-FX1 only supports 1080i, which is the highest resolution possible for HDV (1440×1080). With all the talk about film being a progressively scanned medium and Panasonic’s 24p buzz, it is interesting that Sony is choosing not to go that route at this time. And, from our hands-on tests of JVC’s HDV camcorders, we have to say that we really like the 720p 60fps mode (1280×720), especially for creating really dramatic slow motion effects from high-speed action.

The HDR-FX1 records a clean audio signal. You’ll need an XLR to 1/8-inch adapter to get your microphone into the camera, but the jack is there, as is a headphone jack, of course. A user can switch between Mic and Line levels, although the setting placement on the menu is inconvenient. Switching between the automatic gain control and manual is a snap and a single dial sets the gain for both channels in manual mode. A plastic cover snaps back into place to protect the dial from accidental brushes once you have everything set up. There is a simple 2-channel level meter on the LCD and in the viewfinder, but it is not labeled with dB units. Our audio tests with a couple of shotgun microphones proved that the camera records a strong signal. The camera also has a peak limiter that has a fast attack and a slower release, but it cannot (unfortunately) be disengaged.

Besides the almost limitless image tweaks which let you get the picture you want in almost any situation, we also took the camera through our test bench for more objective measurements. In low-light situations, the Sony VX2100 proved to be a slightly better performer, but only by a stop or so. Our resolution tests also showed that the VX2100 shoots an objectively sharper image on our SD production monitor, which brings up an important point: on an SD television, whether by S-video or by component video outputs, the advantages of HDV and higher resolution will not be apparent. The image of the HDR-FX1 appeared slightly soft on an SD set, but only when compared with the incredible sharpness of the VX2100. Subjective image quality was still very beautiful and we did not notice any degradation when switching between DV and HDV modes.

We also ran tests on a dozen or so HD televisions of various kinds. The quality definitely depended at least partially on the quality of the television used for viewing. For example, on a 42-inch plasma television that can typically only hit 852×480 resolution (which is very common), the HDR-FX1 doesn’t look any better than the VX2100 (but it sure doesn’t look any worse, either).

Once we started testing on better televisions, the difference between SD DV footage and the HD HDV footage was dramatically apparent. Our test footage was simply breathtaking on a 52-inch JVC HD-ILA rear-projection television (MSRP $4,500). The level of detail was amazing and our resolution tests topped well over 700 lines. The image was sharp, but it wasn’t too contrasty and retained fine details, even in deep shadows. We could see some compression artifacts on high-contrast edges and diagonal lines, but the effect was much (much!) less pronounced than test DV footage of the same scene. (We were not able to analyze the video on a computer at the time of this review.)

Interestingly, larger projection, LCD and plasma televisions are mostly 720p, that is, they downsampled the native 1080i image from the camcorder to 720p. Smaller HD direct view televisions often support 1080i, however.

Although Sony’s decision to not develop any progressive modes is curious, the HDR-FX1 still breaks a significant quality barrier, offering fine Mini DV performance as well as breathtaking 1080i high-def images. That is, of course, if you have a proper HD television for viewing the footage.

The HDR-FX1 shoots high-def video that is clearly superior to standard-definition DV footage. 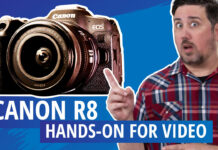 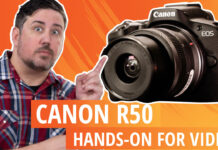