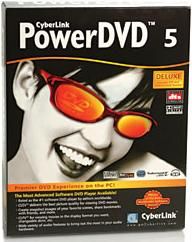 One of the nicest things about having a DVD drive in your computer is the flexibility it gives you. You can read CD-ROMs, play audio CDs, rip music files, and, with the right software, play DVD-Video discs. CyberLink’s PowerDVD 5 affordably gives you the tools for playing DVD-Video titles on your computer in software, without having to install anything else inside your computer.

Installation was as simple as it gets. We upgraded the version of PowerDVD that was installed on our Pentium 4 2.6GHz system by first uninstalling the old software and then installing the new software (as recommended by the version 5 installer). We also applied the 9.5MB build 1107 patch that is available on CyberLink’s Web Site.

The audio options we encountered while testing PowerDVD were truly remarkable in their number. For starters, with the Deluxe Edition, you can play discs with DTS audio, as well as take advantage of Dolby Virtual Speaker technology. Users of either version of PowerDVD can take advantage of Dolby Digital, MPEG and PCM audio playback. The options we imagine will get the most use include a string of SRS enhancements (including TruSurround XT) as well as dynamic range compression, though there is also a proprietary feature called CyberLink Multi-Channel Environment Impression that performs a similar function. Headphone surround processing is also provided via Dolby Headphone and TruSurround XT Headphone technologies. Of course, you can always send the sound out to a surround receiver and let it do all the work (digital audio outputs are supported by PowerDVD, and it can also send Dolby Surround-encoded audio through analog audio outputs). We experienced good results going out to an ‘old reliable’ Philips 2.1-channel speaker system, both with and without the various means of psychoacoustic processing.

As with audio, video also has its share of enhancements in PowerDVD 5. Like any other DVD player app or set-top DVD player, you can show subtitles and resume playback after stopping. Unlike most set-top DVD players, though, you can place bookmarks on scenes across multiple discs for quick access to your favorite scenes.

Like any other good media player application, you can play video full-screen. Unlike most media players, though, you can seize control of the video settings and tweak them to your heart’s content. The primary technology is CyberLink Eagle Vision, or CLEV, which adapts video contrast and colors to take advantage of the fact that the video is going out to a computer monitor (which provides a much wider color range and has higher contrast than televisions provide.) There are also color profiles provided, called vivid, bright and theater, which work similarly to CLEV.

While PowerDVD disabled the power management settings during playback, it didn’t restore them after we closed the program, which prevented our LCD monitor from going to sleep. We didn’t appreciate this very much. If you’re using PowerDVD on a laptop, this might be very bad indeed (especially if you’re already on your second battery of the day), but desktop users also need to be aware of this behavior as well. We are hopeful that a future patch will alleviate this problem (or offer an option to enter power management settings as the program closes.)

CyberLink wants you to know that PowerDVD is not just a DVD player app, but that it also plays a multitude of audio and video formats, including MP3, audio CDs, DivX, Video CD, SVCD, Windows Media files, WAV and MIDI, among others.

CyberLink also offers a remote control for PowerDVD, which is available for $30.

A videographer producing DVDs could get a lot of mileage from PowerDVD while checking projects after burning, without having to fire up the set-top player. Of course, the standard version of PowerDVD can do almost everything that the deluxe version does, and it’s $20 cheaper. So it’s your choice, but overall, we thought PowerDVD was rather a good program.

Upgrade: Yes (available for users of PowerDVD 3 or 4, price varies)

A solid performer, but most users will be just as satisfied with the Standard Version.