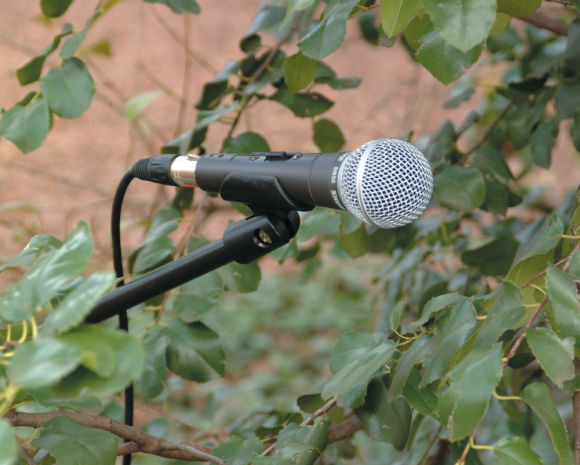 Depending on the type of project you’re shooting, you may need to hide microphones from the all-seeing eye of your camera. This is especially important in drama pieces and reenactments where you want the audience to focus on the action, not your hardware. But video producers aren’t the only ones who hide microphones. Professionals in law enforcement, theater and the movie industry hide their microphones every day and we can learn a few things from their experience with this subject.

We’ve all seen the police shows where they hide a microphone on an informant or insider. This person then disappears into a closed-door meeting while the officials listen to every word. While this type of thing happens every day in law enforcement, it’s actually quite difficult to completely hide a microphone and transmitter while maintaining good audio quality. Fortunately, in video production, we only have to hide the microphone from the camera, not from a gang of thugs who intend to do us harm.


One of the most popular ways to hide a lapel microphone is to conceal it beneath the talent’s clothing. This setup works nicely, but only in a narrow set of circumstances. For instance, a thick jacket or multiple layers of clothing will strongly mute the high frequencies from your recording. Sure, you can boost them somewhat during post-production, but there are limits, and the sound will never be natural. The solution is to hide the microphone under the thinnest or most porous layer possible while keeping the element close to the talent’s mouth. This requires securing the microphone and cable with gaffer’s tape (see Duct Tape sidebar). Medical tape is an alternative when you need to attach a microphone or wire to someone’s skin.


When placing a microphone under clothing, you’ll inevitably have to deal with the rustling of clothes rubbing against the microphone. When concealing the microphone, have your actors demonstrate some of the movements they’ll make during the shoot. Watch closely for potential rubbing points and use a mounting position that is as far away from these trouble spots as possible. Once the microphone is installed, have the talent go through the movements again while you listen with headphones, then make a few more adjustments as needed.


To borrow a technique from the theater, consider hiding the lapel microphone in the talent’s hair or on a hat. Theater sound people often weave a microphone and cable up from the back of the actor’s head, through the hair, securing the element near the hairline on the forehead. Obviously, this option won’t work with a shaved-head basketball player and it works better when a live audience is a good distance away, but it is an alternative for anyone with a moderate amount of hair. The advantage to this procedure is the elimination of the rustling noise of clothing. In addition, the microphone actually stays out in the open, maintaining a more natural sound and the surrounding hair even provides a rudimentary windscreen. While this isn’t an option for every shoot, especially close ups, it is unique solution for troublesome setups.

Theater sound designers also like to hide microphones in set pieces and props. Their favorite tool is the boundary microphone or PZM (pressure zone microphone). This unique type of microphone turns a floor, wall or tabletop into a pickup surface. Boundary microphones have a broad pickup pattern and a very natural sound – quite unlike a lapel microphone or most handhelds. Whether you use a boundary microphone or another type, it’s often convenient to hide them behind props or under tablecloths. This works especially well when an entire scene happens with the subjects sitting around a table, such as a dinner setting, or a boardroom conference. The disadvantage to this method is the increased gain required to get a good recording level. Since the microphone is further away from the talent, you will pick up more background noise and other errant sounds. In addition, if there are several people in a scene, it’s unlikely they will all speak with the same volume. Plan to spend some extra time in post-production tweaking dialog volumes for the various players.


Does your actor hold something during his scene? I once saw a theatrical production where the principal character carried a large walking stick throughout the program. The rest of his costume made it difficult to hide a microphone, so the prop department built a cavity in the walking stick to conceal a wireless microphone. This was a very clever solution to a very real problem. You can also hide microphones in various places inside a car for a mobile shoot. Three popular locations are on the sun visor, on the steering column or in the recesses of the instrument cluster on the dash. Properly disguised, you’ll even have a hard time finding them in the shot.

Out on a Limb

For many years, the most common microphone used in the movie industry has been the boom microphone. The microphone is always near the talent, just outside the frame of the shot, held in place by a boom. It’s portable, easy to reposition and requires a minimum of setup time. In its simplest form, a boom includes a shotgun microphone mounted on a long pole. Leveraging the highly directional nature of the shotgun microphone, the boom operator has only to twist his wrist to completely reposition the microphone and cover an entire conversation with one device. While this is a great way to record audio, it has a few special requirements. The first is the need for a boom operator. Simple enough, but this element alone could break the bank for many low and no-budget productions. Second, the boom operator needs the ability to hear the microphone through headphones during the shoot. Again, pretty simple, but prepare to bring some extra cables and think through the hookup before you start shooting. Third, the boom operator needs to work closely with the camera operator to ensure that the microphone is as close as possible to the action, but still outside the camera frame. This requires practice and a few shot reviews before you start the actual shoot.

Sometimes, no matter what system you use, you just can’t get the sound you want. Sadly, you probably won’t know for sure until well after the shoot, during post-production. For these worst-case scenarios, we’ll borrow another technique from the movie industry – dialog replacement. You might be surprised to learn that much of the dialog you hear in the movie theater wasn’t recorded during the shoot. Commonly, the actors go into a recording studio after the first rough edit where they re-record most (if not all) of their dialog. Why? The main reason is for quality control. The studio setting offers complete isolation from the noises of the set and ensures that you’ll hear every whispered phrase as clearly as a shout.


Can you really do this with your audio and video editing equipment? Actually, any good audio software and some video editors will work – the most difficult part is getting the actors to synchronize their reading with the on-screen action. This is done one phrase at a time, repeating the video segment over and over until the screen and the newly recorded voice match. It’s called looping due to its tedious and repetitious nature. Reserve this method for high-end productions and those times when you just don’t have the audio you need. It requires a great deal of organization to keep all the audio and video bits together, but may be just the ticket to getting high quality audio without showing a microphone.

[Sidebar: Put Away the Duct Tape!]
Duct tape is an important tool in the hands of the videographer, however it is not the right tool to attach microphones and cables. That task is best left to duct tape’s upscale cousin, gaffer’s tape. Although gaffer’s tape looks very much like duct tape, you’ll notice it has a cloth backing rather than one of shiny silver plastic. This makes gaffer’s tape much easier to hide since it doesn’t reflect light. In addition, the adhesive on gaffer’s tape peels off easier and won’t leave behind a gooey residue. This is an important consideration when you’re taping microphones and wires inside the CEO’s expensive tailored clothing.

[Sidebar: Show & Tell]
Sometimes it’s desirable to keep the microphone in plain sight. A news reporter is a perfect example. Your audience subconsciously associates a handheld microphone with the reporter. This is what they’ve seen on TV all their lives, so don’t force them to change that perception – use it to your advantage. Maybe you’re shooting a lounge singer or standup comedian. Dollar for dollar, you can find relatively high quality handheld microphones for very reasonable prices. The recorded sound will be more accurate and you won’t need two sets of microphones.