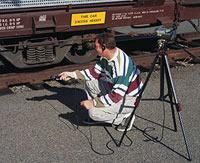 I’ve always been enthralled by magic. The ability to make people believe they are seeing things that aren’t really there is a magnificent skill. If you think about it, though, with creative use of your sound track, you too can become a master illusionist in your video projects.

With some well-placed audio effects, you can trick your audience into thinking they are seeing something that you haven’t shown them by making their imagination do the work. This clever use of your audio track can save you time and money, and will ultimately make you a better video producer.


The Power of Illusion

By using your audio track to give information that your video doesn’t give, or can’t give, you can enhance the possibilities of creativity. Imagine shooting your son crawling through the bushes in your backyard. Pretty boring, huh? Well, next time, try adding the sounds of some crickets in the background, or perhaps a flowing creek. With just a little dose of creativity, your son is now playing in the mountains. Or try adding some mortar blasts and gunfire, and your son is playing in a war zone. Sound has an incredible ability to influence the perception of an audience.

A very common audio illusion is the police siren. Let’s say you’re producing a corporate video encouraging people to drive safely. In one scene, you will show a typical driver getting a ticket, but you don’t have the time and budget to acquire a police car so you can shoot the whole scene. With sound effects you don’t have to. Show the driver’s reaction as he hears the siren and pulls over. Then have an actor dressed as a cop walk up and tap on the driver’s window. The viewer believes there is a police car, even though you never showed one.

Audio illusions don’t have to be big to make a huge difference in enhancing your video transitions. For example, many computer-based editors have a burst transition that looks like the video blows to pieces, revealing the next shot. Try putting an explosion sound effect together with the video transition. The effect can be quite dramatic. In fact, most transitions beyond cuts and wipes can really be helped by the selective use of "stingers," which are short little noises or bites of music that add a little spice to the soundtrack.

The Art of Sound FX

The most important part in creating any illusion is to practice. Audio illusions are no different. The more you experiment and play with your sound track, the better your effects will become. Start by adding simple, natural sounds, like footsteps, that your field mike couldn’t capture.

Sounds that aren’t so natural, such as explosions and bombs, are the field of the sound effects artist. When you put on your SFX cap, remember that you don’t need to add the sound itself, but rather what your audience thinks the sound will sound like. For example, you’ve decided to add some gunfire to that footage of your son playing in the backyard. To be effective, the sound effect doesn’t have to be the sound of real gunfire. It could actually be the sound of a car backfiring. To be effective, it just has to be something that the viewers will recognize as gunfire when the sound is matched to the video.


A Trip to the Library

Locating the sounds for your illusion requires just as much creativity as the vision to use a sound effect in the first place. Sound effects don’t have to come from a CD. Sources for audio effects are as close as your nearest microphone. The world around us is full of recording opportunities, from flowing creeks to bottlenecked traffic.

Whenever you’re recording in the field, listen closely for any new sounds that you can get on tape for future use. If your shooting in a restaurant, record a wide shot for thirty seconds just to get the background ambiance. Do the same thing if you’re at an amusement park with the family or even the kid’s soccer games. Start a library of different sound effects that you can use whenever you need to create that perfect illusion.

If you don’t have that sound that’s just right on tape, look into buying a stock sound effects library on CD. There are many different libraries available, and they can vary greatly in price. Look closely at what’s on the disc before you buy one, too, and make sure it has what you’re looking for. There are as many different sounds in this world as there are stars in the sky. Don’t assume that any library will have the specific sound effect that you need simply because it seems like a common sound.

Too Much of a Good Thing

Ask yourself if you truly need the effect. Audio effects have to fit the video. A police siren would work much better if you could shoot your scene with a flashing red light. The explosion transition has to be timed right or it won’t work at all. If the sound and video are out of sync, it will destroy the illusion, and the viewer will notice the effect. In fact, most audio illusions are quite obvious when they don’t work. The best audio illusions are sound effects that you don’t notice.

When audio and video combine well they become more than the sum of their parts. The synergy of a well-executed audio illusion can pull the viewer in and let him forget about the outside world. These are the magical moments of videomaking, the payoff for all your hard work.