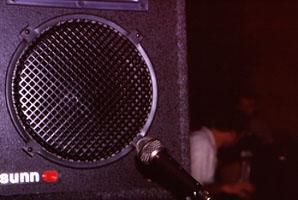 How to get good audio from auditoriums,
gyms and other sound-hostile environments.

As anyone who has tried to record audio in an auditorium can tell you, large
enclosed spaces with smooth, reflective surfaces can be a videographer’s
worst nightmare. Sounds careen off the hard walls, floor and ceiling of
a gym, theatre or music hall for many seconds before they’re finally absorbed,
blending and combining to create a symphony of noise.

For those of you who need to record coherent, understandable sound from
auditoriums and gyms, here are 10 tips to help insure success.


If you’re shooting a game-side interview or a speaker addressing a room
full of listeners, don’t plan on getting clean audio from across the room.
Move your camcorder as close as possible to the sound source. Because of
the way sound travels through air, cutting the distance between camcorder
and subject doesn’t make the subject twice as loud–it makes it four times
as loud.

Wired external mikes offer the advantage of a relatively foolproof link
between mike and camcorder, but the dangling cable can restrict mobility
somewhat. Wireless lav or handheld mikes offer great freedom of movement,
but can be prone to poor reception and interference when used indoors. On
the plus side of the wireless equation, they work well when you have short
distances between the mike and receiver.

You’ll probably get much better sound from the locker room, a hallway, or
any other room located near the gym. Staying close to the auditorium insures
that the viewer will still hear and/or see the excitement of the event.
You may get great audio and a neat visual effect by staging an interview
just outside the doors of the gym, pointing the camcorder back in towards
the victory celebration.

If you can move behind some obstruction, you may get cleaner audio as well.
This might mean staging an interview behind a divider of some kind, or in
back of a row of folded bleachers or stacked chairs. With careful framing,
viewers will never know you’re shooting from behind a sonic barricade.

Overcoming bad sound from an auditorium or gym is not just a matter of the
right equipment–a little creative thought put into the where and when of
your shoot can make a large difference in the quality of the resulting audio.

Wiring into an existing mixer successfully requires either a good knowledge
of signals and connectors on your part, or a good relationship with the
(hopefully) knowledgeable sound person. At the very least, have a good stock
of adapters, transformers and attenuators on-hand. The better prepared you
are, and the easier you are to work with, the better your chances of getting
a clean audio feed. Finally, be sure to use headphones to monitor the house
feed at your camcorder. Should something go wrong with the signal, be ready
to unplug your input cable and switch over to the camcorder’s built-in mike
at a moment’s notice.

Clearly, using your own mike in this way requires securing permission in
advance. Because some may perceive the potential for problems when you add
your own mike to the equation, don’t get your heart set on this approach.
When you do get the green light to use your own mike, the result is often
excellent sound.

Another approach is to put a wireless lavalier mike in the vicinity of the
speaker. Attaching it directly to the speaker is a tricky proposition, as
most loudspeakers consist of two or more drivers each radiating a smaller
portion of the audible spectrum. Put your mike too close to one, and you’ll
get audio with too much bass or too much treble.

A parabolic mike has an even tighter pattern than the shotgun, thanks to
its 12- to 18-inch sound-gathering reflector. Unfortunately, parabolic mikes
are somewhat hard to come by and can be rather expensive. Remember–getting
a less-directional mike close to your subject almost always results in better
sound than a more distant pickup with a highly directional mike.

With some careful planning, you can set up wider shots where a small deviation
in lip-sync won’t be noticeable. Then, after you’ve shot all your footage,
have your talent speak their lines in a more acoustically controlled place.
The resulting dialogue will lack the ambience and echoes the audience will
expect to hear, so you’ll have to add some ambience back in. Use an audio
mixer or an inexpensive effects processor. Simply run the dialogue through
a "large room" or "large hall" reverb program, mix in
an appropriate amount of the effect, and you’ll have realistic ambience
and crisp dialogue. You can perform similar acoustic magic with a computer-based
system.