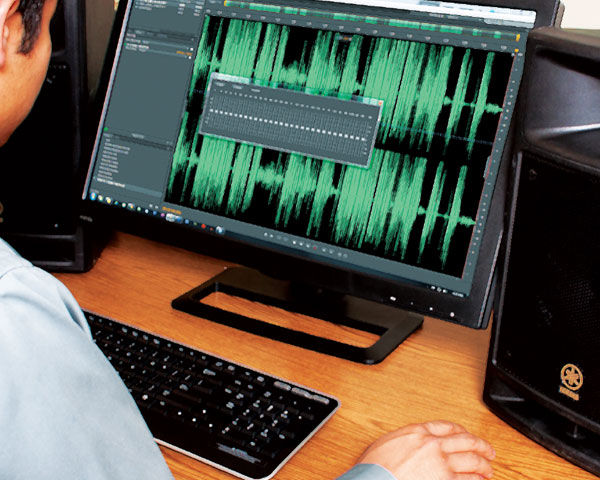 Historically, the whole fix-it-in-post thing was leveraged by directors and producers who knew nothing about what it would take to actually accomplish such a thing. Today, there is a trend toward fixing things in post-production – both audio and video – but now it’s based on the knowledge of our tools and what they can do. If you can grab something now and fix it later, wouldn’t that be better than a reshoot or not having it at all? So, what can you actually fix in post? Technology has created a variety of new possibilities, along with all the old standbys. Let’s take a look. 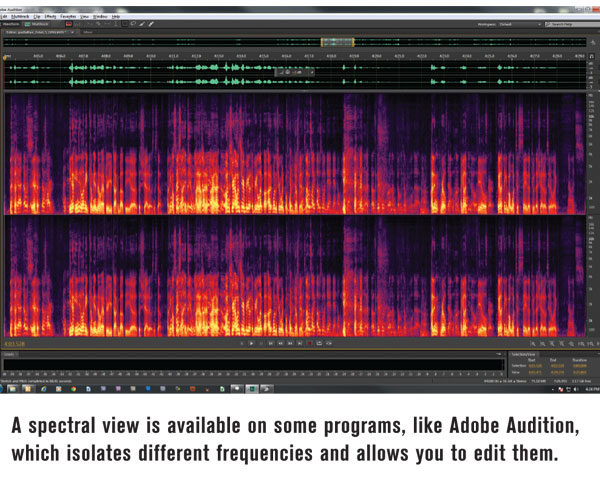 Audio has a couple of characteristics that determine how it sounds: amplitude and frequency. Amplitude is easy, it is a sound’s volume or loudness. You can see amplitude easily in your audio’s waveform view or video editors. It’s the squiggly lines that run throughout your the waveform. No rocket science here; the higher the line goes, the louder the sound.

Volume or amplitude doesn’t mean much if the sound isn’t audible. That’s where frequency comes in. Frequency is related to the pitch or tuning of the sound. Frequency is determined by how many times per second the pitch vibrates. You might have heard of tuning instruments to A440. The A is the name of a musical note and 440 is how many vibration cycles per second. In fact, frequency used to be measured in Cycles Per Second or CPS. Today, it’s measured in Hertz in honor of Heinrich Hertz. Regardless, different numbers, same idea. Of course, it’s unusual to work on one specific frequency. Typical audio repairs concentrate on ranges of frequencies such as the human voice.

In the grand spectrum of sound, humans have a fairly limited range of hearing. The average range is considered to be 20-20,000 Hertz. That covers everything from the lowest lows to the crispest highs in virtually any music. In just about any audio literature or on pretty much every device, Hertz is abbreviated Hz. Hertz in the thousands is abbreviated kHz. Even if you’re new to this, having a basic understanding of the terms and concepts will help when you start fixing things in post. 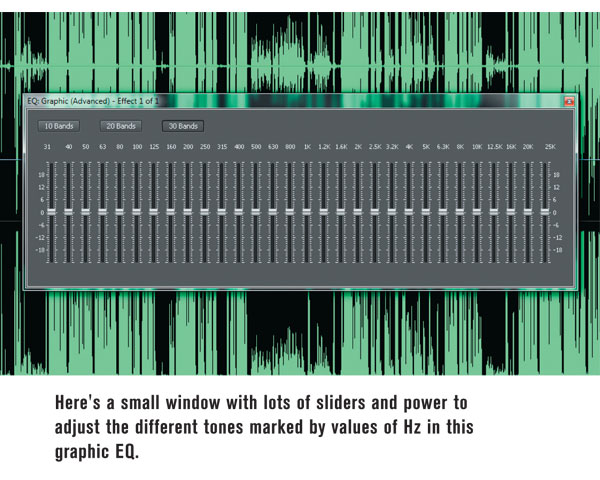 Wouldn’t it be great to have a bunch of audio filters in one place to help with repairs? Actually, you can. It’s called an equalizer (EQ) . Equalizers combine several frequency-specific filters into one device or plug-in. You’ll use an EQ when you want to add or subtract a range of audio from your recordings. On one project, you may need to remove some rumble from dialog while another project needs a boost in a specific range. EQ is perfect for that.

You’re probably most familiar with the graphic equalizer. Used in everything from 32-channel mixers at stadium concerts to your car stereo and MP3 player, graphic EQs allow you to easily shape the tonal quality of your audio. Graphic EQs typically divide the frequency spectrum into ranges or bands and each band has its own controls. An average graphic EQ might have anywhere from five to 31 bands offering either very simple or very specific control of your sound. We don’t need to spend a lot of time explaining their operation either – you simply raise or lower one or more frequency bands to affect the sound. But go easy. If you’re making drastic changes to achieve a listenable result, something else is probably wrong.

Another type of equalizer is the parametric EQ. Rather than divide the sound into specific frequency ranges, a parametric equalizer allows you to choose the frequency or frequencies and adjust accordingly. A typical parametric equalizer might have between four and six bands, but each of those bands is completely adjustable. Not only can you raise and lower the audio content in that band, but you can pick the frequency and the width of the band. A wide band impacts a larger portion of the sound while narrow bands have a more surgical effect. Operation of a parametric EQ isn’t quite as intuitive as a graphic one, but with a little practice, you’ll figure it out. It helps to find a plug-in with a graphical user interface, not just knobs. That way, you can see the impact of your adjustments on the screen as well as hear the results.

Hiss and Hum – the Easy Fix 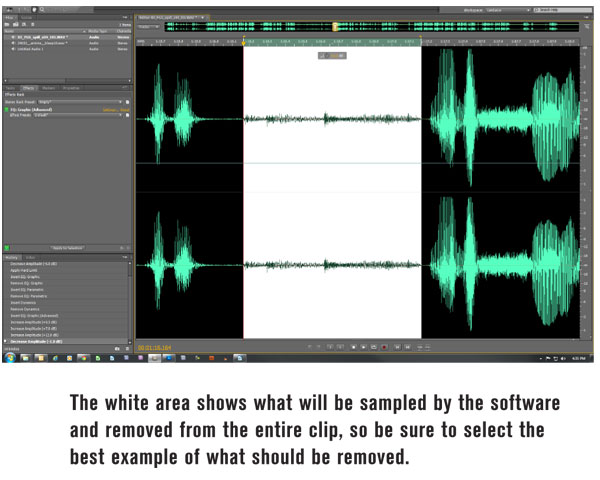 Hiss and hum are very common audio problems. Fortunately, they’re also fairly easy to fix in most situations using simple EQ tricks. We’ve all heard hiss. Those of you shooting with DSLRs may be painfully aware of hiss. When microphones and preamps get pushed beyond their comfort zone (or are just poorly designed), the audio circuit produces a hissing sound. It’s distracting and we should try to minimize it.

The problem is that hiss isn’t one specific frequency. If it were, it would be easy to remove. Rather, it covers the upper range of frequencies, starting perhaps around 10kHz, but extending both above and below that point. To minimize hiss, start by applying an EQ to the audio clip and pull the top band all the way down. You’ll probably hear very little change, so pull the next band down and so on until you find a good balance of hiss removal and sound quality.

Hum is also a very common problem in audio production. It usually occurs when audio equipment gets its power from multiple sources. In the United States, hum sits at 60Hz. In Europe and other countries, it may be at 50Hz. Regardless, since it lives in one place in the audio spectrum, it should be easy to minimize. This time, a parametric EQ is the tool of choice, so you can specify the exact frequency, establish a very narrow filter and cut most of the hum in one pass. During the shoot, you may also find hum at a lower volume in multiples of the frequency. If so, set another narrow filter at 120Hz. The nice thing about these notch filters is that they affect very little of the surrounding audio – helping keep the audio as clean as possible.

While EQ is a great place to start, there are other tools that can make a huge quality difference when doing audio cleanup. The first is noise reduction. Depending on your audio or video editor, this feature may be built-in. Otherwise, it’s a third-party plug-in of some type. Regardless of brand or application, most of them work the same way. You start by finding a second or two of silence, in which the only thing you can hear is the noise. Select the noise sample – usually longer is better – and ask the noise reduction program to analyze the sample. This creates the noise profile that identifies what you want to remove. Finally, you apply the process to the entire file or clip. Depending on your noise reduction program, you may have a virtually noise-free recording very quickly. If not, you may have to tweak things a bit and try again. Even at lower settings, noise reduction can be a powerful audio repair tool.

Another cleanup trick is the use of an enhancer. The techniques they use are as varied as their brand names, but most enhancers add high-end sparkle and low-end punch to a final mix. Aphex and BBE are the big players in this field, but several others have found ways to perform the same task. Typically, high frequency enhancement is done by adding a bit of distortion to the highs. Usually, we don’t want distortion, but this carefully shaped distortion creates the illusion of added clarity. Low frequencies are often improved using time-delay techniques and dynamic equalization. Regardless of how they do it, enhancers are a nice addition to your audio cleanup kit.

Every editor cringes at the phrase “we’ll fix it in the mix,” but the reality is that you can fix a lot of things with some simple audio processing. Learning the built-in tools found in your editors are a great place to start. Once you’re comfortable with their capabilities, add to them with plug-ins. Whether you take sound from video or record it fresh, this allows you to customize your editing workflow and find the best path for your next audio cleanup.

Becoming comfortable in an editing environment is productive, but you run the risk of problems when manufacturers upgrade or discontinue their products. Just think of all those poor Final Cut Pro users who couldn’t open their projects when version X came out. The same holds true for audio editors. You may love the EQ section in your editor of choice, but will your presets work in the next version? What if you have to use another program or operating system? One way to minimize the potential pain is to use universal modules like VST plug-ins. Whether paid or free, most come in cross-platform versions and should work with any audio (or video) editor that supports third-party plug-ins. Just a thought.