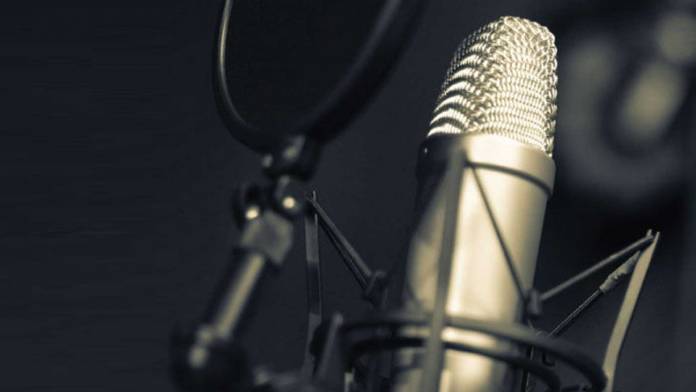 Video sound is easy, once you understand how a microphone works. Unfortunately, few take the time. Sound is a very important part of any production, whether you’re making a feature-length movie or just a YouTube video. With the wide availability of video cameras – from cell phones to DSLRs – it seems that everyone is a video producer today. So this is the perfect time for us to go back to the basics and explain the whole audio-for-video thing from the beginning. Here we go. 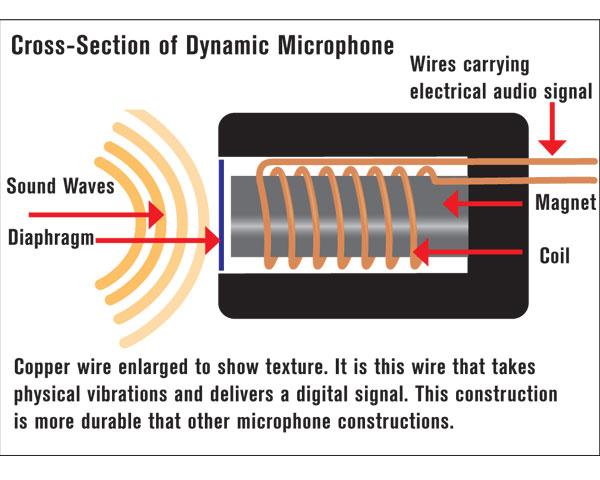 Sound is just small variations in air pressure starting at a specific location – a human, automobile, cricket, machine or whatever. But to complete the cycle, we have to “hear” the sound. Normally, our ears do the trick, but in audio we use a microphone. Microphones are in a category of devices called “transducers.” Transducers convert one form of energy to another. In this case, we’re converting acoustic energy into electrical energy.

Microphones have several variations, both mechanically and electrically. First, there is the method they use to convert acoustic energy. The most basic type is the dynamic microphone. Dynamic microphones have a small diaphragm, usually about the size of a nickel or a quarter. The diaphragm is made of a very thin, lightweight material. At its center, there is a small coil of hair-thin copper wire and the whole assembly is suspended over a circular magnet. As the acoustic energy changes, the diaphragm moves up and down which pulls the coil through the magnetic field. If you’ll recall science class, this creates electricity. Just a tiny bit, but enough for recording. Dynamic microphones are rugged and work in just about any circumstance. That’s why you’ll see them on concert stages, with news crews and even on the podium of the president of the United States.

Another popular microphone type is the condenser microphone. Condenser is the old-school name for what we call a capacitor today. There are several variations on the design, but a typical system includes a backplate and a thin diaphragm – often made of aluminized mylar – electrically separated by some type of insulating material or even air. When sound, or acoustic energy, flexes the diaphragm, it changes the capacitance of the circuit and this difference is output as a small voltage. The voltage is amplified to a level that can be attached to other sound devices like a recorder. Condenser microphones can be very small and are what you’ll find in your cell phone, computer, webcam, video camera and pretty much any electronic device that includes a microphone today. Condenser microphones also require electrical power which is either supplied by the device they’re attached to or with an external battery. 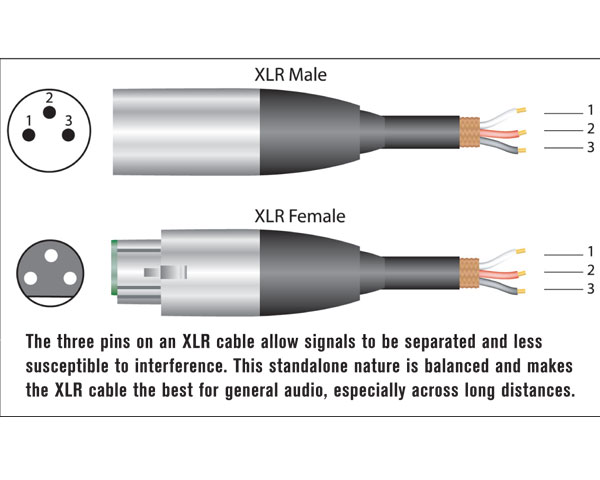 Once we’ve converted the acoustic energy into electricity, we need to hook it up to something that can record – preferably a camera or audio recorder with an audio connection. This is where it gets messy. There are many ways to do this, depending on your microphone and the device you plan to use. A typical professional microphone uses a three-pin connector, commonly called an XLR connector. This type of audio connection is called “balanced” because it uses both positive and negative versions of the audio signal along with a ground wire. Here’s our attempt to describe it in just a few words. Think of a center line with zig zagging waves crossing it. The center line is our ground connection or zero volts. Now the audio that goes above and below the line are the positive and negative portions of the audio signal. Preserving this separated relationship in the wiring provides you with a way to run very long cables without noise. That’s why the pros use it almost exclusively.

In another situation you could have a microphone with a 1/4-inch plug or a 1/8-inch plug. This might be from a camera-mounted microphone or possibly a wireless microphone receiver. While this could be a balanced audio connection, it’s more likely to be unbalanced. Unbalanced audio connections have just two connections: signal and ground. This is great for short runs but long cable lengths will result in lost signal and noise. These can also tend to be more susceptible to interference when running side by side with power cable and other electricity.

In the professional world, hooking up a microphone is easy. It has an XLR connector, the recorder has an XLR connector. Just cable between the two – click, click and you’re done. The trick is mixing professional and consumer or prosumer equipment. Our nemesis here is the ubiquitous 1/8-inch mini jack. Included on everything from pocket camcorders to computers, the 1/8-inch audio connection is a frustrating but functional compromise. The first challenge is its size. It’s small and in video production, small usually equals fragile. As long as you’re careful you should be OK with this.

The next challenge is twofold. First, it’s an unbalanced connection, so adapters are necessary when you attach anything with an XLR. Second, it’s a stereo or two-channel audio connection. Most microphones are mono – pro or consumer – so even more adapters are required and you can’t just run to the local Mega Mart for a solution. The more adapters you involve, the higher the chance that it will either go missing or become faulty. It may be of your interest to go for an appropriate cable like an 1/8-inch to XLR, as with Hosa’s XVM-110M ($13.) Fortunately, a few companies are on top of this. Specifically: BeachTek, juicedLink and Studio 1 Productions. These manufacturers offer a variety of options purpose-built for attaching audio sources to a tiny 1/8-inch audio input. You’ll pay for the convenience, but it’s worth the investment if you create audio for video on a regular basis.

Alternatively, you can purchase a few adapters that will get the job done, too. The trick is deciding what you want to hook up. Microphones are pretty easy but that’s not always what you need. From time to time, your audio may come from a mixer or sound system and that presents another problem. Microphones produce a very weak audio signal and that’s typically what your camera expects to see. But other devices output a much higher audio signal called line level.

Microphones are pretty easy but that’s not always what you need.

Plugging a line level device into a microphone input guarantees signal overload and distortion that will ruin any recording and the simple adapter route can’t fix it. A dedicated audio adapter can compensate for level differences and your camera may have mic/line setting buried in the menus somewhere.

Once you’ve got everything hooked up, it’s a good idea to check the signal level. The trick is to find a balance. Too little signal and your recording will be noisy; too much and you’ll have distortion. So how do you find that balance? It depends on your recording device.

Whether you’re using a camcorder or separate recorder, you’re looking for a way to manually adjust recording levels. Unfortunately, many camcorders and pocket video cameras (even many DSLRs) don’t offer manual audio controls and you’re stuck with Automatic Gain Control or AGC. If this is your lot in life, don’t despair. With some experimentation, you can still get a good recording. In the meantime, start saving your pennies for a small pocket audio recorder with manual adjustments. There are many decent audio recorders to shop for, one such is the Zoom H2n which goes for $350 but others can cost much less.

You may actually have to read the user manual to discover where and how to adjust recording levels in your device – manufacturers don’t typically put it on the front page of menu systems. Once you find it, plug in your microphone and start talking. You’ll see an audio level meter across the screen indicating the incoming signal. Adjust the level so that the loudest sound you expect to record doesn’t exceed the limit of the meters (or light up an overload indicator). This will get you safe, distortion-free audio. If your subject speaks softer, you may have to increase the audio level to get a clean recording.

Some cameras and recorders offer a signal limiter that keeps the audio level from going into overload. If your device has one, it’s probably a good idea to use it. But don’t push your audio levels even higher, expecting that the limiter will fix everything. This is just a safety precaution, and a constantly working limiter will affect your recording quality. It’s best to practice with your audio setup prior to a shoot. Not only will you understand how everything works and the quirks of the system, you won’t make the client wait while you try to get everything dialed in.

We’ve just scratched the surface here, but if you master these fundamentals, you’ll instantly be miles ahead of the competition. Audio isn’t rocket science and the basics haven’t changed for more than half a century. What has changed is our equipment and how we use it. Understanding these audio basics and how they apply in your productions is a strong start.

Sidebar: Get Off The Camera

Portable audio recorders are the darling of the independent film world. With a small budget and even smaller crew, a professional sounding recorder levels more of the playing field. Unfortunately, many indie producers strap their audio recorder to the top of the camera – creating something similar to the distant camcorder sound we’ve grown to hate over the years. All the shock-mounts and windscreens in the world won’t improve audio that’s recorded from 20 feet away. To get the most power from your portable audio recorder, either plug in an external shotgun mic or get the recorder closer to the sound you want to record. Better yet, do both. Designate a crew member for audio duty and equip them with a recorder, headphones, a shotgun mic and a boom pole. One memory card and one set of batteries should last all day and you’ll have audio that truly competes with Big Hollywood.