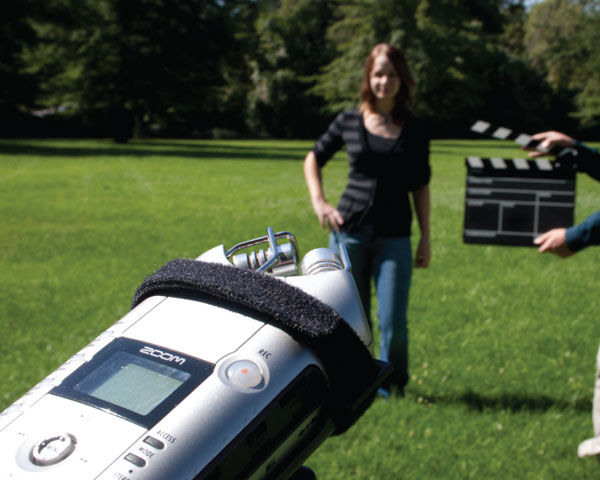 We've always advocated the use of external microphones, but not every camera has a mic jack. Even those that do often have noisy inputs and limited audio quality. Today, it's very easy to gather location audio the way the big boys do – with a separate recorder – and sync the sound in post. The movie and television industries have done it this way for ever. In fact, the reason we expect our cameras to record audio comes from the news world, where everything is included in one package. Maybe the way to move your production quality forward is to take a step back.

There is an incredible range of cameras that record video today. DSLRs, point-n-shoots, pocket cameras and even our cell phones all shoot pretty nice HD video. But they all share one problem: the sound stinks. It's the same problem we've had in the video world for years; a cheap, built-in microphone simply can't record professional audio. Even if your camera has an XLR input and you're using a high quality mic, the sound files are likely compressed. By recording the sound separately – sometimes called Dual System Sound – you can build an audio package that meets your specific needs, whether in the studio or on location. 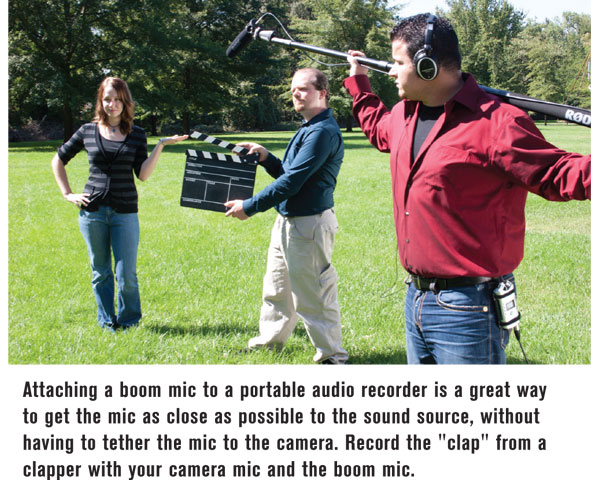 The simplest way to get started is with one of the new pocket audio recorders. Several big manufacturers make these little recorders and there are many models and features to choose from. They all share two common traits: they run on batteries and they record to flash cards. From there, choose a recorder based on your production style and existing equipment. Most have built-in stereo microphones, an 1/8" input and a headphone jack. Others add inputs for line level and a few even have professional, balanced XLR input with phantom power. The good news is that even the least expensive models record excellent quality audio with plenty of control, features and battery life.

Another way to record is using a laptop or netbook and a simple USB audio interface. There are several USB-powered audio interfaces available for under $100. Most include balanced XLR input, headphone outputs and even phantom power for your condenser microphones. Attach one of these to your laptop or netbook, load your favorite audio software, and hit the record button. This is a simple, portable system that can easily produce professional recordings. Plus, you can use the same interface back in the edit suite for voice overs and sound effects recording.

Shooting with sync sound isn't much different than a normal shoot, but there are some changes. Obviously, setting up the video is the same however you shoot, but there are some extra steps in the audio setup. After connecting your microphone (idealy using the XLR input), you'll have to make sure your audio recording device or software is set to the proper recording mode. A good place to start is the file format. Although most video editing software will accept compressed audio formats like MP3, resist the temptation and record in an uncompressed format – usually WAV files. Set the sampling rate to 48kHz and the bit depth to 16 bits. This setup replicates the audio system for DV recording, is already DVD friendly, better than CD quality and should give you an excellent recording. It is likely the setting your editors audio track is already set to. Many recorders and interfaces can use higher sampling rates and bit depths, but your file size increases dramatically and it's unlikely you'll hear a significant improvement. While you're in the menu, synchronize the date and time with your camera if possible. It will save you headaches later.

Separating audio from video adds some challenges, but also creates some opportunities. For instance, if you use one of the smaller pocket recorders with a lapel mic, it can function as a virtual wireless microphone without any noise or range problems. An audio person booming a shotgun mic on a pole can monitor with their own headphones untethered from the camera and free to move around as needed.

After you hit the record button on both the camera and the audio recorder, it's important to slate each take in order to sync sound later. The easy way to do this is with a clapper board. With the clapper in clear view of the camera or cameras, state the information about the take and smack the clapper bars together. This provides a simple visual and audible cue that makes sync easy in the edit suite. 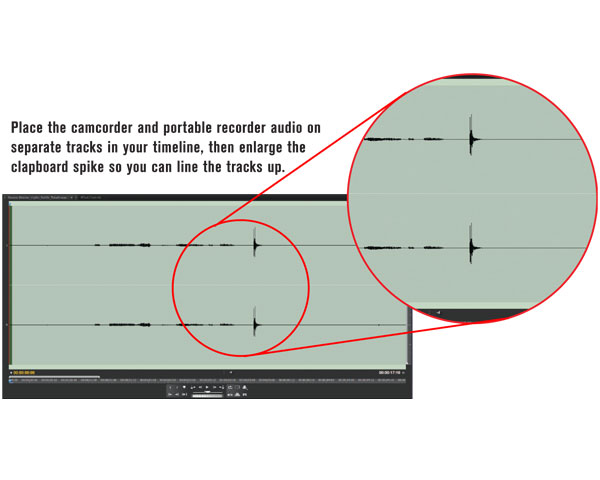 iPhone and iPad users have a digital alternative. Search for "DSLR Slate" in the app store. For just a few bucks, you can have a thoroughly professional slate that fits in your pocket or backpack. Of course, you can do something similar by simply clapping your hands. How ever you do it, slating every take is very important when you're recording audio and video separately. You'll learn to appreciate this extra step once you start editing.

Following the shoot, it's time to re-combine your audio and video elements. After you dump all the files into a folder and load them into your editing program, the fun begins. If you did your homework and followed a consistent workflow during the shoot, you should have one audio clip for every video clip you shot. If you did, congratulations! Your edit will be easy. For the rest of us, we may have to do some digging. This is where the date, time and slate information comes into play. Essentially, you're comparing each video clip to its corresponding audio track or slate information. And you may have to split some audio clips into smaller chunks on the audio track if you recorded continuously during the shoot. This can take some time, but after you've done a few, it gets easier.

Once you've identified matching audio and video clips, drop them on the timeline, zoom in on the audio track and look for the clapper spike. Simply slide the audio spike to match the clapper in the video and link the two files together. Make sure to delete or at least mute the sound from the video clip and your sync sound will become the primary audio. You might have to play with this frame-by-frame from here, until you get a perfect match. Now, just edit as usual. Of course, you have to do this for every set of clips, so this might take a while.

But what do you do when your sync sound doesn't sync? You can sync up the beginning, but, by the end of the clip, it's out of sync. Long-form projects are the most vulnerable here and there are several possible causes. Video frame rates vs. project frame rates, audio sampling rates and even hardware issues could be the culprit. One repair technique is cutting up the audio and re-syncing every few minutes. This is a serious pain, and makes for a very complex audio track, especially on a long project, but it may be the only way. Alternatively, try adjusting the speed of the audio clip, adding or subtracting small percentages as needed – a little goes a long way here. To assist with this, add a clapper to the end of each clip, just before you stop recording. This provides an additional sync reference point for audio stretching. To find out more about some syncing issues a number of our readers have been discussing check out this forums link.

Sidebar: Sound All Around

We tried to keep this article non brand-specific, simply because there are so many options for recorders, audio interfaces and software. Each has its merits and any given item might or might not be the perfect fit. However, there is one unique recorder worth mentioning by name: The Zoom H2. While it doesn't have XLR input, this little pocket recorder has one feature not included on any other model we know of – it records in surround sound. With four built-in microphones, the Zoom H2 records two stereo pairs – one facing forward, one facing back. Add a separate dialog track and you have a nearly perfect surround recording solution. As for another recording device, The Tascam DR-05 has similar features to the Zoom H1 and costs the same. It looks like a solid piece, and the Tascam pedigree doesn't hurt.