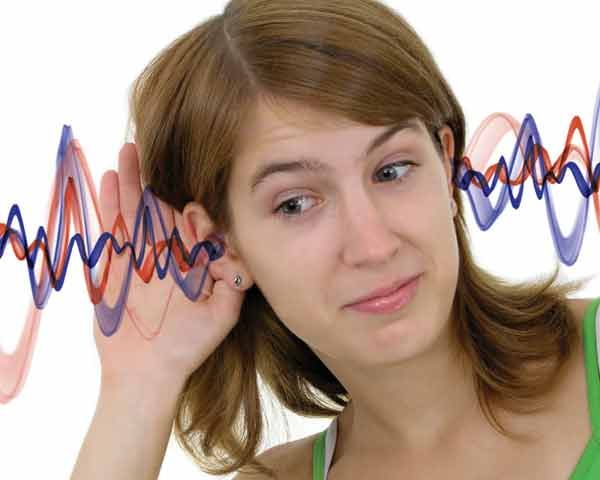 While surround sound is gaining ground, there are still plenty of uses for stereo recordings. Broadcast TV, video games, Internet video and, of course, music still make excellent use of stereo techniques. With the right equipment and a few tips in your head, you can produce a stereo soundtrack that’s easy to edit and the perfect compliment to your onscreen content.

Based on the Greek word stereos, meaning solid or firm, stereo in the audio world generally means a recording with two channels, simulating the effect of human hearing with two ears. The recording is played back over two speakers, one on the right and one on the left. No rocket science here – it’s something we all live with every day. But the process of creating that recording is a little more involved.

Recording in stereo, at the most basic level, requires two identical microphones. These can be simple handheld mics, large diaphragm studio condensers or just about anything in between. Most stereo recording techniques use cardioid or directional microphones although omni or non-directional models are used sometimes too. You’ll also need microphone cables, a mic stand or two and some mounting hardware. Specifically, a little audio tool called a T-Bar. This is simply a bar that holds two microphones on one stand. You’ll see how to use this in a bit. Finally, you probably need a small audio mixer and, obviously, something to record with. This can be your video camera, a laptop, netbook or a dedicated audio recorder. 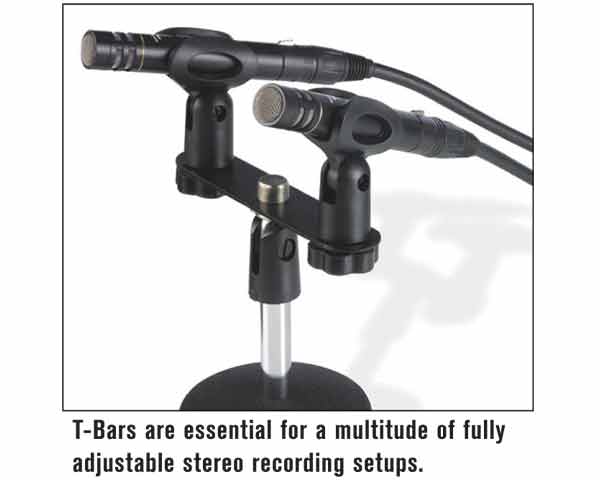 The easiest way to get stereo audio is to point your video camera at the audio source and hit the record button. Most camcorders have stereo microphones and do a decent job of gathering stereo sound. Unfortunately, they also pick up noise from handling the camera – noise from the zoom, focus and image stabilization motors. Plus, the sound quality from tiny mics buried deep in the case often leaves quite a bit to be desired. In most cases, You can do better. In most cases, you’ll want to ditch the on-camera mic altogether. Below, you’ll find the most popular stereo recording techniques. Try them all if you can. 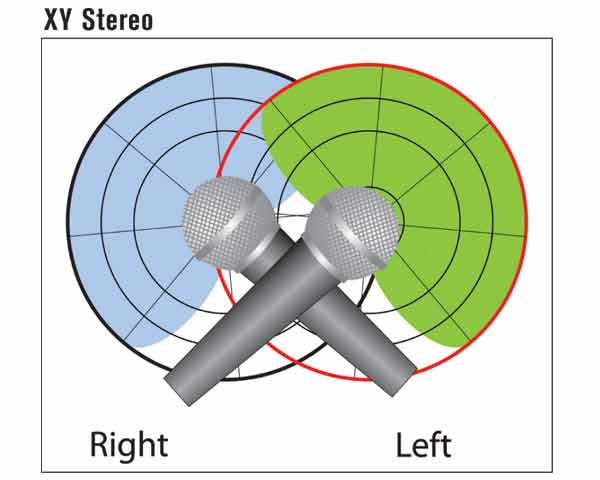 This is the most common stereo setup and it yields consistent results. The setup is simple. Using a T-Bar or two mic stands, overlap the heads of your two microphones – one on top of the other – pointed 90 degrees apart. One microphone will be pointed at the left side of your sound stage and the other will be pointed at the right side. Adjust the height and distance from the source for the best balance of sound. Recordings made with this technique have distinct left/right imaging along with a solid center. Additionally, if the sound were ever played back on a mono speaker, the sound would still hold up nicely. Try adjusting the spread between 90 and 120 degrees for a more dramatic stereo image. 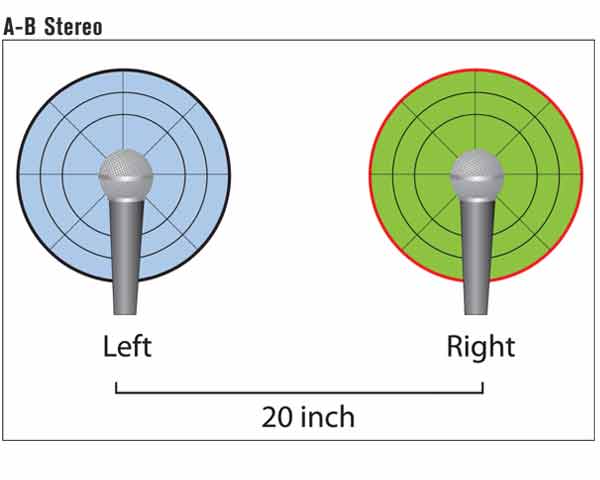 This technique usually uses two omni-directional microphones but you can try it with cardioids too. Place each mic on its own stand roughly 20 inches apart, pointing each straight ahead at the sound stage. That’s all you have to do. Of course, height and distance are important here too, so adjust as needed. Setup here is very simple and probably the easiest of the stereo techniques. The resulting recording will have clear left/right imaging and you may hear more detail between the speakers compared to the X-Y method. On the downside, A-B stereo won’t work quite as well in mono but it’s still a solid technique and certainly worth trying. 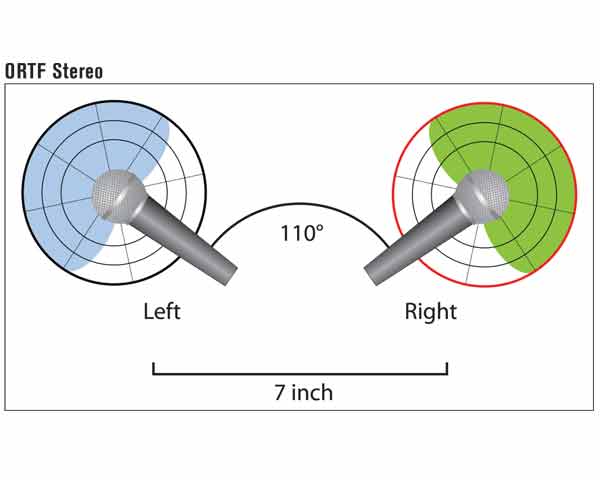 In technical terms, the X-Y stereo recording method is called a coincident pair. The ORTF technique – from Radio France – places the microphone heads 6 inches apart facing out at a 110 degree angle. This is called a near-coincident pair and usually yields a rich stereo image. Your setup is similar to the X-Y method, using the T-Bar, but now the mics face away from each other. While the sound in the center may seem a bit more distant than other techniques, it’s a great way to record music and holds up well when played in mono. 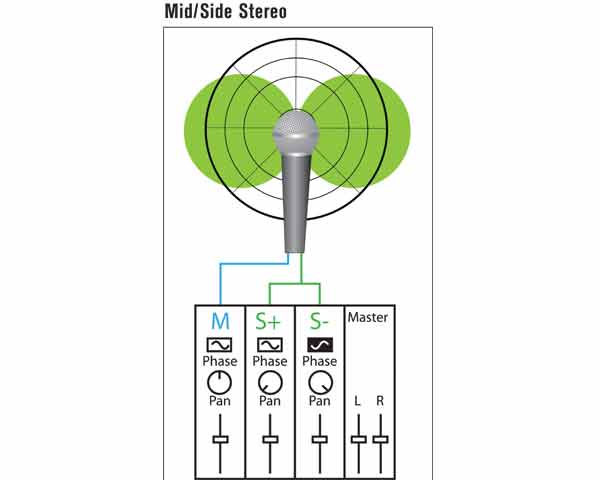 This one is a little more complicated and requires a figure-8 microphone or a condenser that can switch to that pattern. Figure-8 mics pick up sound on the left and on the right, with no pickup to the front or rear. Again, you’ll need two microphone stands and two matching, multi-pattern studio condensers. Set one of the mics to the cardioid pattern and the other to figure-8. The cardioid mic faces straight forward at the sound source. The figure-8 mic is set up in the same vertical plane as the cardioid only the pickup lobes face left and right. Record the front-facing microphone to the left channel and the side-facing mic to the right channel. Back in post, the front or mid mic is panned to the center. Make two copies of the side channel and pan one to the left, then reverse the phase on the other copy and pan it to the right. With all three channels at equal volume, you’ll have a very nice stereo image. But you can also reduce the side channels and still have a solid, mono compatible center channel. It’s more trouble but far more flexible down the road.

Dragging mics, mixers and stands to a location is no fun but there is another way to grab a good stereo recording. Many manufacturers, including Edirol, M-Audio, Sony, Tascam and Zoom offer a new breed of portable stereo recorders. They run on batteries, record to flash cards and include a stereo pair of microphones built in. Mount one of these on a stand, point it at the sound source and hit the record button. Back in post, you’ll have to sync the audio to the video but the recording quality is excellent and mechanically separate from the camera. There are no wires to connect and no mixers to set up. This is quickly becoming the de-facto way to gather audio – especially for those shooting video with DSLRs and users who don’t have mic jacks on the cameras.

All these stereo recording techniques are great and offer some powerful tools for excellent recordings. But what if you need stereo and you need it now. No setup time, no time for adjustments. You need a solution you can deploy quickly that just works every time. How about a stereo microphone? Try a Google or eBay search for the Sony ECM-DS70P. This little mic is just about as simple as it gets – it’s also small and cheap. Originally designed for Sony’s MiniDisc recorders but it works great with most camcorders too. Grab a couple today while they’re still available.