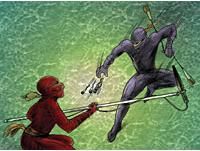 The black clad ninja sneaks into the compound unseen and is about to rescue the emperor’s daughter when a band of thugs appears in his path. One by one, he handily defeats each with a variety of weapons and even his bare hands. He completes his mission and slips mysteriously into the night. It’s a bit of a stretch, but we can learn a lesson from the ninja. He is the master of many weapons and skills and instinctively knows which one will serve him best in each situation. The same is true of your microphone choices. When you understand all of their strengths and weaknesses, and how to use them, you will instantly know which choice is best for each audio situation.

Ask any martial arts instructor and they’ll likely tell you hand-to-hand battles are the least desirable. When shooting, the last thing you want to use is the built-in microphone that came with your camcorder. Sure, it’s always with you and requires no setup or cables, but the sound is unprofessional and less than inspiring. It’s easy to understand why: the camera has several internal motors constantly whirring and grinding away. Distance is another issue. Your camera is 15 feet away from Great Aunt Martha as she recounts her childhood during the Great Depression. You composed the shot nicely and the lighting is great, but you can barely hear her speak. Then, Uncle Elmer, who is sitting near the camera, begins to discuss his wife’s selective memory with Grandma Esther. Their conversation takes over and your interview is ruined. The moral of the story? Start with external microphones first.

You might consider the handheld (stick) microphone as the nunchuck of the audio world. These simple microphones are great for quick audio setups and man-on-the-street interviews. You see them used on local and national news broadcasts every day. Handhelds have two very different pickup patterns. Choosing the right one goes a long way toward creating professional video sound. The oldest and most common pickup pattern is omni-directional. You can probably guess that this type of microphone picks up sound equally from all directions. Some classic examples of omni-directional microphones are the ElectroVoice 635 and RE50. Still manufactured today, these workhorses’ on-air presence is a testament to their durability and function. There is a downside to omnis: because they pick up sound from all directions, they cannot isolate the person speaking from other loud sounds. A reporter on a construction site may be overrun by the sound of machinery behind her.

A better alternative is a uni-directional or cardioid microphone. This type picks up sound primarily from the front and it’s easy to point the business end at the sound you want to record. The directional nature helps minimize the effects of other sounds and spotlights the recording on your subject. It’s not magic: you’ll still have to yell "Quiet on the set!" Regardless of the pickup pattern you choose, get the microphone close to the person speaking. Reducing the pickup distance to less than a foot greatly improves the ratio of wanted to unwanted sound.

With the precision of a knife, throwing stars find their target and stick tight. The same is true of lapel or lavaliere microphones. You’ll place these tiny microphones directly on the body of the subject, sometimes in plain view, depending on the genre of your program. Their distance from the mouth is consistent which makes them an excellent choice for sit-down interviews. Lapel microphones are small and unobtrusive in your shot, too. This is the professional standard for newscasters and interview subjects. Along with a variety of sizes and colors, lapel microphones also come in omni and uni-directional flavors, although omni-directional is the most common. Windscreens are available for outdoor applications and it’s even possible to hide a lapel microphone under a shirt or sweater. Just don’t bury the microphone too deep in clothing as it will muffle the sound. Look closely at professional interview videos and you may find a miniature microphone hiding under a collar or just behind a row of buttons.

Leveraging the ability to get the best of one’s opponent from a distance is the strength of the staff. Shotgun microphones work in much the same way. Whether stand or boom mounted, a shotgun mike reaches out with a highly directional pickup pattern. This requires the operator to point the microphone precisely, but the benefit is high isolation from unwanted sounds. This is the microphone of choice for movies and television shows since the sound mixer can use just one or two microphones to cover a group of people. Shotgun microphones are very sensitive and prone to pick up more than their share of wind noise. If you’re shooting outdoors, make sure you have a foam windscreen at the very least. For more extreme wind reduction, you’ll need a special device called a zeppelin. This is a sort of cage for your shotgun microphone, often covered in a thick fur. The fur breaks up the wind and the cage mechanically separates the microphone from the wind.

Sum Greater Than The Parts

If you’re choosing your first external microphone, consider the type of video you shoot most and buy one that compliments that shooting style. As your skill grows, add other types to your collection to offer alternatives.

Regardless of your external microphone choice, you will always record better audio than you would with a built-in microphone. The added expense and setup time are well worth it and give your productions the professional edge.

The next time you face the angry thugs of video sound, go into battle with the right weapons and the knowledge of their particular strengths. You’ll rescue the princess every time.

Author Hal Robertson has been producing stereo soundtracks for over 24 years. He owns a consulting company that specializes in media production.

Sidebar: Microphones in the Real World

Sometimes, the correct way to deploy microphones isn’t the best way. Take theater for example. In a perfect world, everyone would have an invisibly installed wireless lapel microphone. Reality dictates this isn’t practical and, often, impossible. One effective alternative is to fly multiple handheld microphones over the stage. This creates pockets of pickup that will cover most of the action with as few as three mikes. Another option is the use of several shotgun microphones at the front of the stage. Place the microphones on short stands and aim toward the furthest pickup points. This leverages the directional nature of the microphones. If your equipment budget is thin, one person can sit in the front row and point a single shotgun at the action, much like a boom in a conventional shoot. If you can use lapel microphones, but don’t like see-ing exposed microphone elements, consider weaving a miniature lapel mike into the hair, bringing it out just under the hairline at the forehead or near the temple. This placement offers surprisingly natural sound and minimum visual impact.