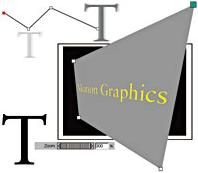 You’ve used your editing software’s character generator to make simple titles for your videos, now how about adding a little motion to your graphics? Making titles that roll, crawl, slide, spin, shrink, grow, speed up and slow down as they cross the screen is easier than you may think. Chances are you can do it right in your editing program. In this article we’ll teach you how to get your titles moving, adding a professional touch to your productions.

Since Adobe Premiere is one of the most popular editing programs on the consumer market, we’ll use it to illustrate how to make moving titles. If you have an editing program other than Premiere, don’t despair, you can apply the principles that this article teaches to whatever program you work with.

The two most commonly seen moving titles in video are rolls and crawls. Rolling text moves vertically, up or down the screen, crawling text moves horizontally across the screen. We’ve all seen rolling titles at the end of a video or film for final credits. You’ve undoubtedly seen crawling text along the bottom of your television screen to update emergency conditions, news headlines, stock tickers and sports scores.

To create either rolling or crawling text in Premiere, you follow the same basic steps: Open the Title Creation window and select the Rolling Title tool. Make sure the window is wide enough for your text by clicking on the lower-right corner of the rolling text tool and dragging it out to the necessary width, then type your text.

For our sample project, we decided to create final credits that would roll up the screen. We started off by centering our text and typing:

Starring
(in order of appearance)

We then typed the names of actors appearing in our video, went to the Direction section in Roll Options and selected the direction that we wanted the text to move, then saved our title. After we ran a preview of our moving text, we dragged it to our project bin and then to the timeline.

Once you’ve added the text file to the desired spot on the timeline, you can determine the duration by grabbing the edge of the icon and stretching or shrinking it to the length you’d like it to be. If you’ve got 20 names to list under the credits and your title file only covers three seconds of your timeline, the names will fly by. If you’ve only got three names to list and you make the file 20 seconds long, the credits will move at a snail’s pace. Experiment with each title so the length and speed are appropriate.

Premiere’s rolling title control options can be handy whether you’re creating the beginning titles or final credits. With Pre Roll, for example, you can determine how many frames you want a title to hold motionless on the screen before it begins to move. Post Roll allows you to determine the number of frames that you want the end of your roll to freeze and hold on the screen. We wanted our credit roll to end with "A QWERTY Production" freezing at center screen for three seconds before fading out. To make it happen we simply set the Post Roll to 120 frames.

Ramp Up lets you determine a gradual increase in speed of the moving text. Ramp Down does just the opposite. Here, you can specify how many frames the file should use to decelerate to a halt. The more frames you put, the smoother the deceleration. If you leave the value at zero, the clip will stop abruptly without slowing first.

Another way to create moving titles is to use your editing software’s motion tool. By selecting Video then Motion in Premiere, you can access a motion interface that allows you to make any clip on your timeline slide up, down, across, over or through the screen. You can also use it to move, rotate, zoom and otherwise distort your clip. Most of the advanced video-editing applications have a feature that animates a clip so that it moves across the screen along a prescribed path. You can use this tool to animate your title file by creating a motion path. It’s easy to do.

Once you’ve created your text file, drag it to the timeline. Then highlight it and open the Motion Settings dialogue box. You’ll see a frame of your selected clip moving along a default motion path with the start and finish points indicated. There’s also a Visible Area box on the screen so you can see what will actually appear on-screen.

To change the path that you want your file to take, simply drag the start and finish points to wherever you want them. To create a more complex path, you can click anywhere on the motion path and a new point will appear. Then, drag that point to where you want the clip to go. It’s like connecting the dots. The clip moves from the start point to point 1, then to point 2 and so on until it gets to the end point. This is an easy way to create complex patterns like triangles, squares, circles or whatever else you can think of. To see a quick preview, click on the Play button in the dialogue box.

One of the most compelling features of the Motion Settings window is the control that you can exert over your motion path of a clip. At the bottom of the Settings window are three sliders for setting Rotation, Zoom and Delay. There’s also a motion path timeline (the length of which equals the length of the clip) where you can set points where you want the delays, speeds and distortions to occur.

You can set rotate, zoom, delay and even distort the shape of the clip at any point on your motion path. The software automatically creates a smooth transition from one position to the next. By assigning a numbered value for each point, you can create a variety of movements for the clip. To rotate, zoom or delay the clip, select a point on the motion path, then you can drag the Rotation, Zoom or Delay sliders to change the position of the clip. For example, if you want to have your clip rotate 45 degrees, you can drag the slider until 45 appears in the value box or type 45. For rotation, the values range from -1,440 degrees to 1,440 degrees (equaling eight full rotations).

If you want to zoom a clip at a specific point on the motion path, drag the slider or type in the percent that you want to zoom (100 percent is full screen). The percent can vary from 0 percent to 500 percent. When you want to have your clip delay on screen, you can select the point where you want it to stop and then type in a delay percentage. The percent is based on the total length of the clip. So if you want a clip to spin in and then stop in the middle of the screen for half the length of the clip itself, you’d type 50 percent.

To distort a clip, go to the Distortion window and click on any of the four handles at each corner of the clip. Then drag it to wherever you want it to be. You can stretch a clip, make it appear at an angle or do many other wild things to it so it twists and squirms its way across the screen.

The tracks on your timeline are a fantastic resource for creating layered titles. Try creating your titles as two or more separate layers and combining them on your timeline. Create a background layer that crawls slowly from left to right, and use another track on your timeline to place a title over it that slides in and freezes at center screen. With 99 tracks at your disposal, you can create some extremely complex composited titles.

This article just scratches the surface of what can be accomplished. With a little creativity you can use these tools to create spectacular titles for your videos. Add a little interest to your titles by adding a little motion. Bring that text to life and put those days of boring, static and lifeless text where they belong: in the past.