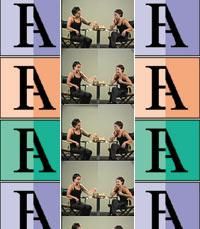 Compositing. Say the word aloud. It’s really not as scary as it sounds. In fact, you probably already know more about compositing than you realize. The most important thing to remember about compositing is that there really is nothing to fear. Once you understand how simple compositing can be, it will soon become just another tool you use to enhance your video projects.

A composite video, by definition, is a combination of images joined or blended together into one image. In its simplest form, this could even be a dissolve. Blending two images together for a brief moment, a dissolve is a composite of two different video images for whatever duration the transition lasts. Adding titles and graphics, also called CGs (character generator) is compositing. If you look at the title as a separate image blended with the video background, adding the title is a combination, or composite, of images.

Because most editing software integrates dissolves and titles into the programs, we tend to overlook the fact that these are composite shots. But they are. Dissolves and transitions are the simplest forms of compositing. Once you understand that you’re probably building composites already, taking steps that are more advanced isn’t so scary anymore.

The next step up in technical complexity is full-image compositing.

Watch the local news tonight. Often the anchor has a box over her shoulder with video or a graphic inside it. This is a full image composite. Notice that this smaller box has the same aspect ratio as the overall image. The effect is called full image compositing because the box that sits over the shoulder is actually a full screen video element. The editor or director reduces the size of the full image and positions it over the background. The effect is quite common and works well if you’re producing a mock newscast.

Full image compositing is not limited to two layers. You can use multiple layers to create effects that are more complex. A good example of this is the Brady Bunch effect. The old TV series opened with a shot of the six kids, two parents, and Alice the maid in a tic-tac-toe arrangement. Seems complicated, but it really isn’t. Try it yourself. Put your camera on a tripod in front of a neutral background and videotape nine family members. Use your pets and neighbors if you have to.

Once you digitize or capture the footage to your hard drive, set the nine different clips on separate layers in your editing software. Reduce all of the clips to one third of their original size and give each clip a small black border. Now, instead of leaving all nine clips layered on top of each other in the center of the screen, offset each image into the different squares created in a tic-tac-toe arrangement. Because most editing software can only play back one or two layers at time, you must render, or build, the composite. After completing the render, congratulate yourself on building a nine-layer composite without fear.

One of our earlier examples, a title, is actually a complex composite. Because the editing software takes care of the compositing automatically, we consider it simple, but if you didn’t have a titler program, you can still title your video with a little fearless compositing.

For example, let?s say you’ve videotaped your daughter’s fifth birthday party and you want to start the video with a title saying, "Happy Birthday". Create a "Happy Birthday" title in your titler or in a graphics application that spells out the words in white letters on a black background. Import the title into your editing software. Make sure the image has the same dimensions as your project. For example, if your video is 720X480 pixels, make your graphic or image the same size. Add this title or graphic to the layer above your daughter’s smiling face.

If you composite these two layers together now, you wouldn’t see anything except the white letters on black background. Instead of using the whole image, as in full image compositing, you want to use only the white text. You must lumakey the title over the background. By telling the software that you want only the brightest part of the screen layered over the background, in this case, the white letters that say "Happy Birthday", you are defining the section of the image that you want to layer based on its luminance value. This is called a lumakey. [see Figure 1]

If your editing software can’t create titles or you don’t have a graphics application, you can always put white sticky letters onto black posterboard. Then shoot video of the poster board and digitize it. After digitizing your video and importing it into your editing program, simply perform the lumakey as in the example above.

Keys are an excellent way to define the sections of your image that you are compositing. Lumakeys are just one of variety of different types of keys. Another very common key is a chromakey. It works just like a lumakey, but instead of basing the selection on the luminance value, you are defining the key based on its chrominance value. This is a fancy way of describing greenscreen or bluescreen shots.

While typical chromakeys can vary from easy to complex, the concept is still relatively simple. Shoot your subjects in front of a specific color, usually green or blue, and then remove that color (using your editing software) when you edit. You can use any color for chromakey, but green and blue are the most common colors used because they are the least likely to be seen in skin tones.

Effective use of a chromakey composite can enhance your video. Say you want to produce a short documentary on your family history and you want to interview your grandmother talking about the old days. You could simply videotape her sitting on the couch in her living room, but that wouldn’t be very dynamic.

Instead, plan a chromakey composite. Shoot your grandma in front of a green cloth or wall. When editing your piece, chromakey her over old pictures and film to highlight and reinforce what she is saying. The effect can be quite dramatic.

There are many specific issues to be aware of when shooting a chromakey composite. Lighting is critical. Also, make sure your talent is not wearing any clothes that are the same color as that which you are keying out, unless that’s the effect you want. (For more chromakey information, see The Chromakey Genie, in the September 1998 issue of Videomaker). Chromakeys can be a lot of fun. Experiment with them. [see Figure 2]

One of the simplest forms of a composite shot is a dissolve. Commonly used as a transition from one shot to another, a dissolve, like other transitions, briefly combines two shots into one. But what would happen if that transition wasn’t brief? One of the easiest ways to build composites is to use your transitions as layer controls. It sounds confusing, but it really isn’t. Remember, this is fearless compositing.

When compositing these two shots together, use a left-to-right wipe transition with the start and endpoints set at 50 percent. Timing is critical. Make sure the two shots line up correctly or the illusion is broken. The easiest way to synchronize the two clips is to give them the same length and starting point on your timeline. Build the composite and voila! Suddenly you’re a twin! [see Figure 3]

You can also experiment with the shape of your video elements. Use soft edge wipes to blend images together. Use other transition controls to alter the shape and position of your video. Explore the options your editing software provides for image control and you’ll be amazed at the variety of interesting composites you can create.

The two most important steps in creating good composites are planning and experimentation. You should pre-visualize your effect before you shoot your video. You can’t chromakey your subject after the fact. However, don’t let your script get in the way. Experiment. Put grandma in space, or in front of the Eiffel Tower. Play with your video and you’ll be surprised at how quickly your creativity blossoms.

Pre-visualizing your effect can help you when you’re actually shooting your subjects. You know you’re going to put your friends and relatives into a Brady Bunch effect. If you plan it correctly, you should know who is going to be in each spot. If you put your mom in the top right corner, for example, when you videotape her, have her looking down and to her left, as if she’s looking at the other people on the screen. With a little simple planning on your part, you can enhance the effect.

Planning is also important in how you set up the layers in your composite. Look at your layers vertically from top to bottom. The highest layer will be the image on top. It will cover all the layers underneath it. As you add layers to your composite, make sure they are in the correct layered order. Look for any overlaps and make sure they make sense visually. Typically, graphics and titles should be on the top layers. It looks odd to have text partially covered up. Backgrounds and other full screen images fit best on the bottom layers of a composite.

Before you build a composite, double check everything. Depending upon a variety of factors, your composite could take a long time to render. Don’t waste your time. Watch each layer individually in real time and then visualize how they will blend together. Any problems? Take care of them now and you won’t have to re-render later.

Good compositing can do wonders for your video project. Composites can focus the viewer’s attention on exactly what you want it to focus on. For example, lets add a slight wrinkle to our Brady Bunch effect. Add a voiceover to the composite listing the names of our nine friends and relatives. As the announcer says each name, add a color highlight or a slight size increase to the box of the named person. The viewer’s eye is drawn to each specific box with each announced name, making a powerful combination of images and sound.

Grandma’s stories about the past seem much more interesting when she’s layered over old pictures and film, as opposed to sitting on her couch. By using a composite, you can focus the viewer’s attention on what Grandma is saying. You get to reinforce her story with the background visuals and keep your audience visually stimulated at the same time.

Most videographers shy away from composites at first. But there is nothing to be afraid of. Creative compositing offers endless possibilities and many composites don’t require any special compositing software. As soon as you understand that each layer is simply one instrument of the whole composition, a symphony of images is possible. Experiment with compositing and your videos will sing.