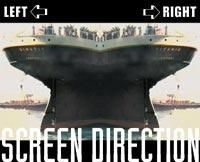 When director James Cameron shot the scene of the departure of the S.S. Titanic on its fatal voyage, every dockside sign appeared in mirror type, every vehicle had its steering wheel on the wrong side and every man or woman’s costume was buttoned backward. Why? Because he’d built only the starboard side of his behemoth ship set and it was aimed screen right (so the prevailing winds would blow its funnel smoke backward). Since passengers of the real Titanic had boarded on the opposite (port) side, he sent his actors up the starboard gangplanks and then flopped all the shots horizontally, re-aiming his doomed monster screen left.

Cameron was able to pull this off because he’s a master of the mysterious principles that govern geography in two-dimensional media.

These principles are deceptively simple:

That’s about all there is to screen direction. But, as simple as these principles are, I have seen costly Hollywood productions stopped dead in the water while the director, cinematographer and continuity person argued about the correct direction for action in a shot. (Imagine a scene assembled from the viewpoints of six cowboys playing poker at a circular table, and you’ll realize how hairy screen direction can get.)

The main idea behind screen direction is that, from one shot to the next, people and objects (like vehicles) should remain pointed–at least approximately–at the same side of the screen. This consistency strengthens the continuity from shot to shot and helps keep the audience oriented.

So let’s see how screen direction works and how an editor controls it, starting with a closer look at those deceptively simple principles. (As often happens, however, editors have to stray onto the director’s turf because screen direction is created in the process of shooting– editors are stuck with whatever results they get.)

To see this principle at work, look again at Figure 1. If you add imaginary action lines to the three setups, you’ll see that actor and camera always stay on their own sides of the line.

Figures 1 and 2 illustrate different forms of screen direction. The walking man in Figure 1 illustrates screen direction of movement. In figure 2, the actor travels in the same direction, but the camera position changes.

There is also what you might call screen direction of convention. When you shoot the two ends of a phone conversation, for instance, you should have each speaker pointed in a different screen direction, even though they are not on screen together. Because they are talking to each other, the audience expects them to be "looking at" each other too.

A second screen direction convention is map orientation. Maps typically show north at the top, west on the left side and east on the right. For this reason, a car or plane traveling from, say, New York to San Francisco is usually shown moving screen left, or, if you will, "map west." This convention usually shows brief transitional shots of vehicles. In Titanic, for example, Cameron used several un-flopped shots of his right-facing mockup, even though the ship was supposedly sailing "left" (westward) toward America.

In some cases, conventions are used because movie makers simply have no other choice. For instance, if you shoot scenes inside a car, the driver will always face screen right and the passenger screen left, no matter which way the car is moving. After a zillion scenes like this, audiences simply accept this convention. However, if the vehicle’s racing westward (screen left), a direct cut to the driver’s profile aimed screen right (conventionally, eastward) can be disorienting. In this case, it may be better to use a neutral angle as a buffer shot between the two. You can also use buffer shots when you want to change screen direction.

The most obvious way to reverse direction is right on screen so that the audience watches and follows the change. Here, as always, you’re dependent on the scenes that the director shot, so you may not have any footage that includes the change in direction.

When this happens, the next best alternative is a neutral angle. By cutting in a buffer shot of the person or object headed directly toward "6 o’clock" (or "12 o’clock’) you smooth the transition between the different screen directions.

What if you don’t have a neutral angle either? Then look for a shot in which your actor leaves the frame. Hold the empty frame for a beat before cutting to the next shot with its reversed screen direction. That moment of empty frame allows the old screen direction to fade slightly before the new one is introduced. This method works just as well the other way: cut to an empty frame and let the actor enter it.

But what if the director failed to deliver an on-screen reverse or neutral angle or an exit from the outgoing shot? Resort to the editor’s sovereign remedy: the cutaway. For example, a shot of something in the environment or another person between the two screen directions distracts the viewer’s eye enough to conceal the switch.

And don’t forget the old Titanic ploy: if you edit with nonlinear software or with a digital switcher, you can sometimes save the day by not switching screen direction at all. Instead, reverse the next shot horizontally, to match. Of course, this ploy doesn’t work if you have something like a car steering wheel in the frame. And a street sign proclaiming eunevA tsriF is a dead giveaway.

All these techniques are just swell, of course, but why bother with them in the first place? What’s so important about screen direction anyway?

Continuous screen direction helps conceal where you’ve edited two shots, and it also keeps the audience oriented as to who’s where and what they’re doing. But screen direction does more for an editor: it allows you to avoid monotony by using several different types of continuity.

In parallel cutting, for instance, you intercut two or more different actions. If A is chasing B (or both are racing toward the same goal), you might cut back and forth between them. In this situation, you keep both A and B moving in the same screen direction. But if A and B are coming from different start points, you would maintain one screen direction for A and the opposite direction for B. (To see four different actions intercut in almost delirious complexity, look again at the climactic battles in Star Wars, Episode One.)

On the other hand, suppose you want to condense Andy Hardy’s preparation for a big date into a few brief shots: buying flowers, showering, splashing on cologne, adjusting his bow tie, driving off in his flivver. To show that there are time lapses throughout the sequence, you might want to eliminate screen direction altogether.

And after all’s said and done, can you violate screen direction? Sure, as long as it works on screen, it’s fine.