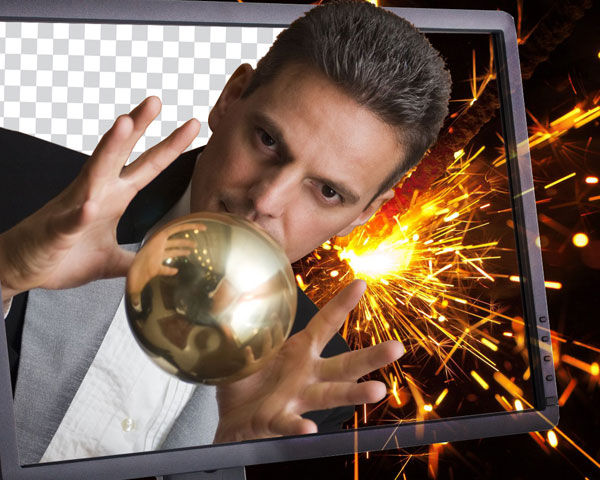 In its most practical form, compositing breaks down communicative barriers and makes a statement when needed. It overcomes technical barriers that otherwise limit production. It sets the stage for wild creativity and brings imagination to life. It allows the creation of more compelling images, ones that are beyond the limitations of normal production. Impossible shots become reality. Compositing is screen magic. It’s a form of digital alchemy and its secrets can be revealed.

The art of compositing can be intimidating and confusing to the novice compositor. The truth is, compositing is simple. It’s something we see everyday and great results are achievable with most software for video editing. When compositing first moved from the analog universe of optical printers to the digital world of the desktop, one needed visual effects programs and compositing software to make the magic happen. Today, it can be done without an advanced Adobe After Effects skill-set. A basic understanding of compositing makes it easy to create compelling images that speak to the audience.

Simply put, compositing is the combination of separate visual elements into a single image. Compositing is as simple as using a green screen to key a subject and place them on an animated background, something that is obviously not real but accepted in our visual vernacular. It can be as complex as creating a scene of separate images subtly melded together so the audience believes it to be one cohesive shot, like a giant robot that destroys a city block.

Transparency, the ability to control the opacity of an image or a portion of an image, is the basis for compositing. This allows separate images to be placed on one another and for those images to interact. There are numerous techniques to create transparency. Understanding the techniques and the strengths of each is the key to compositing. 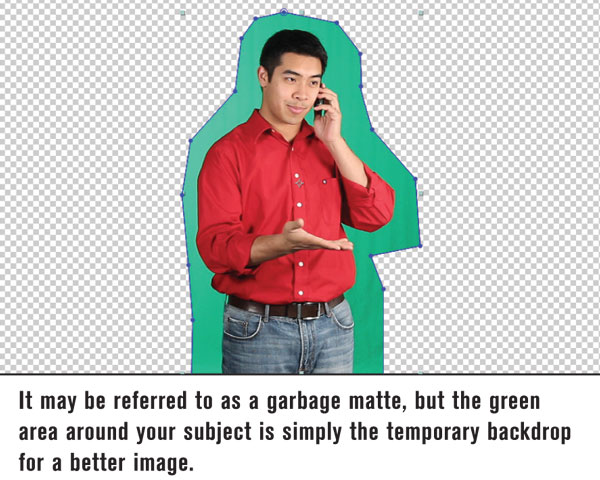 Compositing is accomplished by generating a matte or mask that can be utilized to create the needed amount of transparency. The terms matte and mask, are contingent on the software being used and are generally interchangeable. For the purpose of this article, a matte can be defined as the information derived from an image to define what is transparent and what is opaque. An example of a matte is the use of color information from footage shot on a green screen to pull a chromakey, so that anything that is colored green becomes transparent.

A mask can be defined as transparency that is created from using a toolset designed for many sorts of visual effects compositing, not just making portions of a video transparent. An example is the use of splines to rotoscope a portion of an image, defining which portions are opaque and which are transparent. The finer the control of the definition of the mattes and masks, the better the final composites will be. 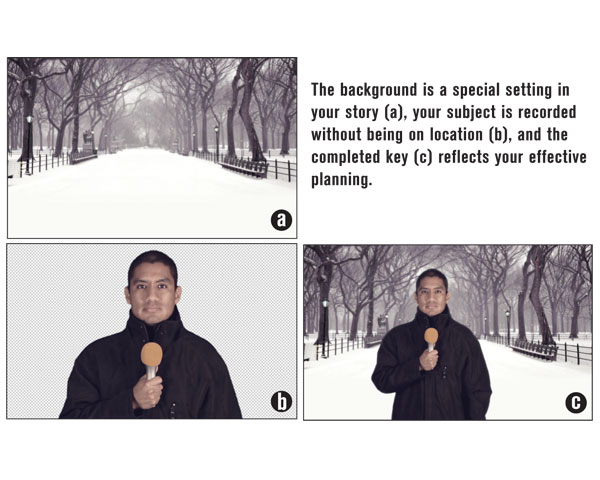 Keying is the technique of selecting an isolated range of information in an image and using it to create a matte. There are two basic keying methods, chromakey and luma key. A chromakey uses the color range of an image and a luma key uses the luminance range. Keying is a technique that is particularly strong for taking a recorded subject and placing it on top of another image or in another environment. This puts a different background behind your subject and has a great host of applications for many styles of video.

The use of a green screen or blue screen is the most common use of chromakey. It is the technique used on the nightly news to superimpose the weatherperson over the weather map. Green screening subjects is a staple of the visual effects industry and creates outstanding results when done correctly.

A luma key uses the same technique as a chromakey, but instead of using the color information it uses the luminance, creating transparency based on which pixels are brighter or darker than a selected value. An overexposed sky is easy to replace with the use of a luma key.

There are several techniques to generate masks. The easiest is using a mask generator. These are found in most every piece of software for video editing. Type tools and shape tools are examples of simple mask generators.

A more advanced technique for creating a mask, one that requires compositing software, would be drawing splines to rotoscope, or cut out, a particular subject. The cut out image is then composited with other images. It’s a technique that works on both still and moving images. Programs such as Adobe After Effects make these tools available for the consumer.

Mastering the basic techniques are a finite portion of compositing. How a composite is finished is what sells the illusion. There is no “Magician’s Code” to compositing, its secrets are revealed through observation. The first rule of thumb for any composition is honesty. Does the composite accomplish the goal of its intended purpose? It may need to be believable in the overall context of your production, or it may just simply need to pass by on the suspension of disbelief. Quality composites are achieved by utilizing the same practices used to make a good image and a good production.

A successful composite starts with proper planning in pre-production. A planned-out shot will be easier to composite because the individual elements will be shot with the final result in mind. This might be accounting for space on-screen that would otherwise appear to be a mistake in composition. A plan determines what elements and images are necessary to gather in production, setting up the post-production process for success.

During production, footage shot with the intention of compositing greatly increases the chance for success. A camera that is properly white balanced will make it easier to adjust and match the color across shots in post-production. If the color temperature is different between the two images, they will stand out in contrast from each other and be more difficult to match up. 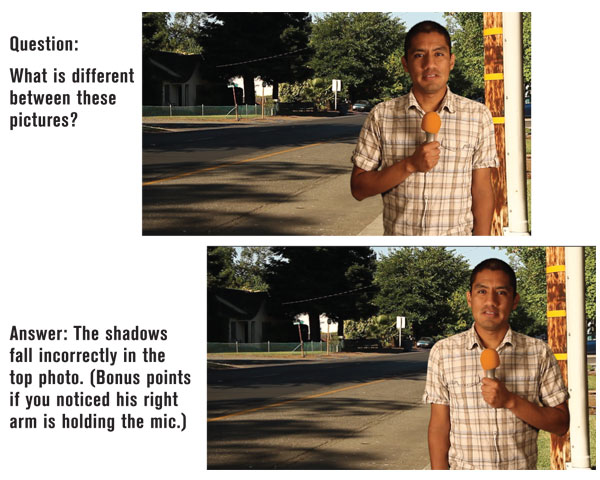 Just as color is important, so is lighting. Lighting differences will be apparent in the final composite image if the shadows of the source lighting is different between the separate images. For instance, if the background image is shot in daylight at high noon on a sunny beach, the subject element should not be softly lit from the side. In a cohesive scene the direction of light and its falloff is consistent across all elements in the final image.

Post-production is when the art and craft of compositing unite as the separate images come together. The basic compositing techniques, when done properly, will create a consistent transparency and the edges of the composited elements should appear clean against each other. A well-matted or masked element placed on a background will blend in without blatantly revealing its own edge.

Coloring and light need to be accounted for in post-production as much as they do in production. First, the lighting values and dynamic range need to match across elements. Shadow density, midtones and highlights should be adjusted individually for each element. After the luminance is corrected, color should be corrected for each element so they match up with each other. A final pass of color correction through the entire composition helps unify the final image.

Sidebar: Create a Sense of Depth

A good composite contains multiple elements, creating a believable image. The greater number of overlapping elements that interact in a composite will create depth and help sell the illusion. The believability of a subject placed on a background environment is enhanced by placing foreground elements that overlap the subject and the background.