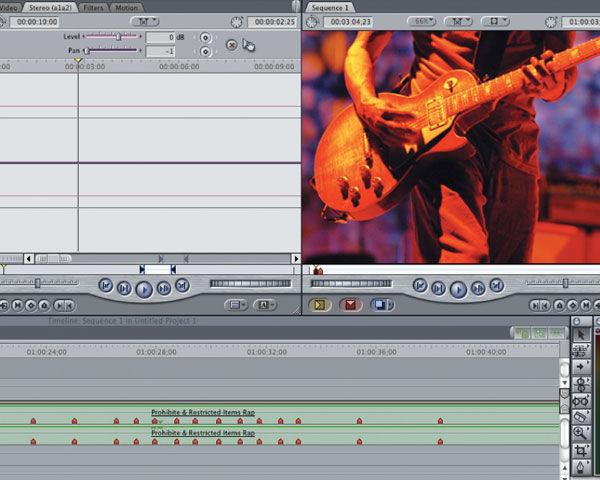 Many great directors today got their start doing music video editing. Director Spike Jonze, Where the Wild Things Are, was a well know music video maker, creating various Beastie Boys music videos long before he started directing feature films. With the rise of viewership of music videos since MTV began in 1981 and the somewhat ease of digital video editing, it seems nearly all bands have at least one member with a few music video editing techniques up their sleeve. Let’s look at what it takes to become a better music video producer.

Some of you may want to jump ahead of the class with more advanced music video editing software. Digital video editing software for the PC like Adobe Premiere Elements 10 ($100), Sony Vegas Movie Studio HD Platinum 11 ($95), and Pinnacle Studio HD Ultimate Collection ($130) are noteworthy upgrades from the previously mentioned freeware. On the Mac, you can go straight to the big-boy digital video editing software, Final Cut Pro X ($300). All of these options give you a lot more bang for your buck: more video controls, more video effects, more audio controls, more audio effects, etc. These additional features may also include more options of the type of video and audio you can import into your project and many more choices as to what types of files you’ll export. Actually, you don’t need most of this stuff unless you’re going to be cutting a lot of music videos, but two features to keep in the back of your mind as you learn are multi-camera editing and timeline markers. Multi-camera editing is perfect for the editor who wants to edit live music events with multiple points of view (cameras). This feature will save you a bundle of time if this is the nature of your work. Look for the more expensive options, Adobe Premiere Pro ($1699, Production Premium Suite), Final Cut Pro X ($300), and Sony Vegas Pro 10 ($600). Lastly, keep an eye out for timeline markers. As we mentioned previously, one of the more important music video editing techniques is editing on the beat of the music. Timeline markers help you visualize where those beats occur and streamline this technique greatly. We’ll revisit this topic in more depth later.

Artists are finicky bunch, am I right? Luckily, we’ve got some simple tips for working with these visionaries. Get to know their music, first. Not just the music video you’re editing, but also songs from the entire album. It will help you better define their style and may help guide your work when you’re a bit lost. Ask questions about their own musical decisions. Why is this song in a major or minor key? What would you say the mood is? Why did you open the song in this way? A deeper understanding of the song is always good. Be a good listener, the director or band leader will have a vision for the video itself and you have to carry the vision to the viewers’ eyes. If you have any doubts, discretions, or creative input, it’s a good idea to frame it as: “If I were the viewer this is how I’d imagine seeing it…” This helps put your creative input in the context of the end users, which at worst will help the visionaries realize that you’re acting in their best interest.

What? I thought I was only editing this production. No, it’s crucial you’re around for the shoot if you can make it. This is especially true of the low budget variety as you’ll probably be needed (hey, you can pick up a gig as an extra). But more than that, a lot of creative decisions and discussion happen on set and you don’t want to be out of the loop of the music video’s direction. You may also need to be present for any special effects planning on the shooting days.

If you’re doing a multi-cam production make sure your shooters sync up. A simple clapboard will work. Have all the cameras roll footage pointing at the same clapboard. Snap the clapper down with the audio of all the cameras’ ideally capable of recording the “snap.” If you can’t capture the actual audio, you’ll have to sync up based on the visual clap as best as possible (it won’t be easy, but it’s doable). Multi-camera shoots should continue to roll constantly from that point forward, without turning off the cameras. Some cameras have running timecode settings which would mean that you could omit this procedure, but that feature is usually reserved for the best of the best cameras. When in doubt, just keep rolling.

In the editing studio, import your footage, pour yourself your favorite caffeinated beverage and get ready. Music video editing techniques pay off with a lot of caffeine – so my experience has proven. If you’ve been diligent this isn’t the first time you’ve heard the song. In fact you could have the audio track already imported in your project even before the shots are in the can. Maybe have a read-out copy of the song lyrics, especially if editing for a rather raucous band whose lyrics might not easily be understood.

Now, with the music track and some intermediate-level music video editing software, you can begin to lay down timeline markers. For example, in Final Cut Pro, you can press play on the timeline video and press the M key to place a timeline marker at that exact moment in time. The playhead keeps going and you can press the same key again to place another marker, and so on. You can also select the audio track with the mouse so the audio is highlighted, then hit the M key to place the markers on the audio file itself. Try doing this to the beat of the music.

If you mess up, remove the marker and move the playhead back and try again. It doesn’t have to be deadly accurate. Once you’ve done the whole song, you’ll have a great visual cue of where all the potential cut points are at the beat of the music. Caution: don’t move your audio file on the timeline if the markers are set to the timeline’s timecode and not to the audio file or you’ll lose their place in relation to the song. Another great way to help visual the audio characteristics of your song is to turn on the waveform view for audio files. Not all digital video editing software has this feature. Consult your manual.

Cutting to the Pace of Music

So you have a ton of markers on your timeline now. Just cut to them and save, right? Wait, no. Use the timeline markers as a guide, not a rule. You’ll find points in the song where it feels right to cut to the pace of the music, and then you can use the markers. Then, you’ll find parts, perhaps a bridge where the mood of the song changes, where you’ll want to change the pacing on the music. You’re the editor, you decide the pacing. Just make sure it matches the mood and changes when you want to add emphasis to certain areas of the song. “Cutting to the pace” doesn’t refer to just the sound of the music, but also the visual. One thing to consider is the close up shots. If you have a close up shot of the drummer banging his head to the beat of the music, a close up of the guitar strumming, make sure they match the beat and the music, or it’s a poor edit.

Inevitably, the lead guitarist is going to ask for a star wipe or an explosion of some sort. Be prepared to try one of our tips to work through that creative challenge. Effects in music videos are not a bad way to separate your production from the pack, but they should always add meaning to the production and ideally not be a distraction in and of itself. Most importantly, they can’t be the only music video editing technique you rely on. Nonetheless, we’ve got a few old standbys that are powerful yet subtle.

Try good ol’ black and white video and push up the contrast level for a nitty-gritty style. Rap, Punk and any genre with a healthy dose of angst will work nicely here. Slow motion is always a tasteful addition to a music video when used in the right moment. If there’s a moment of great symbolism in your video, consider slo-mo effects to greater emphasize the moment. Emotional peaks in the song also lend to slo-mo video. This technique works well in ballads and slower-paced songs, but they can also work just fine in quicker numbers. For live music events, consider doing a few window-in-window (also called PiP, or picture-in-picture) effects. This effect has become more popular. There are lots of variations, where you can have multiple frames up at the same time: a stream of the drummer, the bassist, the lead guitar and the lead singer all in their own frames. Also try something simple like editing a PiP with the lead singer and a shot of the crowd. This is great way to give the video a unique value by showing different POVs (Point of Views) at once.

Shine On, You Crazy Diamond

Our last and perhaps best piece of advice is to go out and do it. Friends and musicians can use the help to make their vision become a reality. And while you’re enjoying some downtime, watch music videos, as many as you can. The average length of a music video is three minutes, so you could watch ten in the time you watch an episode of TV and you’ll enjoy 10 unique visions. With time, patience, exposure to new ideas and a refinement of your own creative thoughts, you’ll be quickly on your way to Hollywood or MTV.