Take the movie Forrest Gump. The audience gets to see Forrest’s life from childhood to adulthood in less than three hours. That’s the magic of editing. Last month we discussed slow motion, which can be used to manipulate time and expand a brief moment into a much longer time period. This month we’re going the opposite direction and speeding up the movie reel. We’ll be discussing “fast motion” or better known as time-lapse video.

Time-lapse video is when the playback of a video clip appears to be faster than the natural speed of the action that has been captured. For example, a video clip that shows a flower bud blossoming into full bloom in ten seconds uses a time-lapse technique to speed up that natural process. This technique works by capturing a single image of the flower every ten seconds for up to four or five days until it reaches full bloom. There are some obvious challenges to getting this to work. Patience is one of them. Let’s quickly discuss some of the time-lapse techniques to get a better idea what kind of clips can be captured.

There are quite a few prosumer cameras that will allow you to set your camcorder up to capture time-lapse video. The typical time-lapse settings allow you to set the camcorder to capture a second or more of video per various time intervals, usually every one to thirty minutes. The camcorder will rest in standby mode, then engage the recording mode to record the short interval of video, then go back to standby mode. This continues until the camcorder runs out of tape or battery life. Let’s just say we set up a camcorder to record one second of video every thirty minutes, and plug that camcorder into a wall outlet so that we don’t lose power. Now, we point the camcorder to an office desk with window revealing the world outside an intern’s small working space. We press the record button Monday morning at 7AM, an hour before the work starts. With a 60-minute tape, recording one second every thirty seconds, we’ll be able to capture a total 3600 short moments (60 minutes multiplied by 60 seconds). We’ll run out of tape 108,000 seconds (30 hours) after pressing the record button. That means that when we play back the hour-long tape, we’ll see our intern work his entire work day, see the day pass by in the window, and then see the start of the next work day. We just condensed 30 hours into one hour. Amazing! But what if you don’t have a camcorder that can do this? Your video editing software can most likely handle time-lapse video for you, although with some limitations. 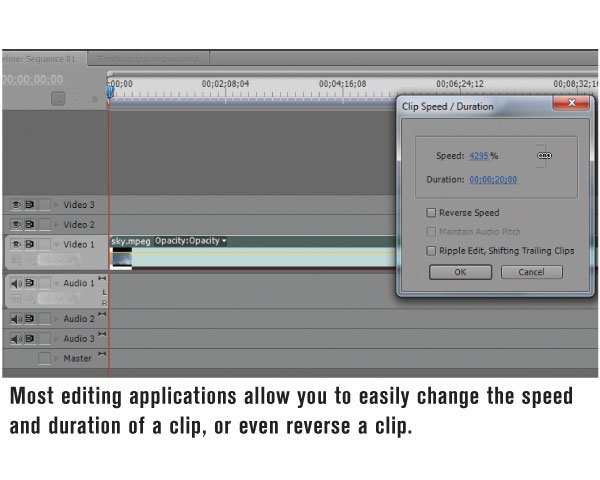 Let’s say your 6-year-old daughter will be celebrating her 7th birthday and you want to make a short video for posterity. You’ve decided that she’ll be getting a new easel (she likes to finger paint). You capture every wonderful moment, including her big grin when she opens the easel. You put together a 3-minute video and everything is swell, but you’d like a creative closing shot with the easel in use. You could show a slowly-paced 5 to 8 second shot of your daughter using the easel while she paints and then fade out to black. That doesn’t seem to have the punch you’d like at the end. Wouldn’t it be nice to see the importance of the easel in relation to your daughter’s artwork? That would make the gift seem much more important, which would make the video much more enjoyable. But how would you achieve this in the final seconds of the video? It’s time for time lapse. Now you can set up your camcorder to record your daughter setting up her art easel, and painting a picture of a birthday cake. You record the video in normal speed the entire time. Then, you capture the video in your video editing software. The whole sequence is fifteen minutes long. On the timeline, you select the clip and change the duration to be 8 seconds. Just like changing the playback speed, changing the duration either speeds the clip up or speeds it down. In this case we’re forcing the 15-minute clip to playback in 8 seconds. There you have it. The final shot of the video shows the birthday present in action tying together the exciting event. And, it was done without invoking any settings on your camcorder. 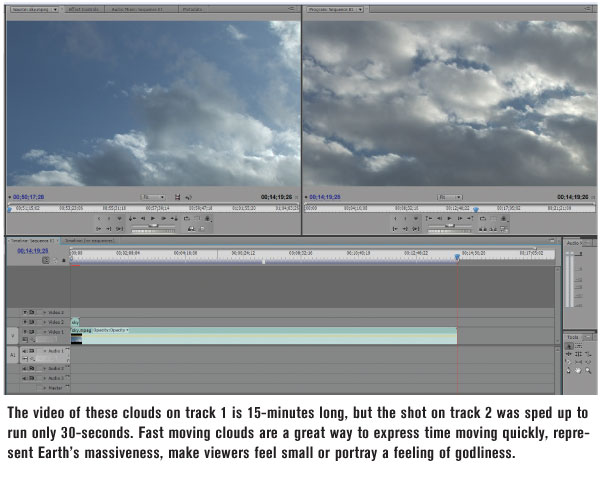 There are a few tricks to mastering time lapse video. First of all, make sure to use it wisely. Speeding up the playback speed of a clip is great for revealing events that go by with little notice. Take, for example, the film Baraka. The director, Ron Fricke, uses time lapse to capture hours of natural events that occur on earth. The results are amazing, showing the audience how big and majestic the earth can be. And it’s used to connect that “bigness” with the subject of the film. Make sure to check Baraka out.

Use time-lapse video whenever you want to demonstrate the passage of time or emphasize unique events that take place over a longer period of time. In the example we used of the intern at the office, we used time-lapse to reveal the effort of the workday juxtaposed against the ongoing life outside the office window. In the right film, this could be used to show something about the character, perhaps dissatisfaction with his job.

If there is something very important happening within the frame of a time-lapse scene, make sure to put the camera on a tripod. Lock the tripod down tightly and make sure neither you nor anyone else will bump into it. It can be awfully distracting to the viewer if the shot is very bumpy or “jumps” every once and awhile. You don’t always have to lock down the camera. In Baraka, they used a specialized pan head that slowly pans the camera to capture the scene happening outside the frame. You can find a similar, cheap alternative with a motorized tripod head used for telescopes.

Let’s say we import that hour’s worth of footage of the intern at the office. And we decide to speed it up even more in post, reducing the entire hour of video into a fifteen-second video clip. That’s no problem, just change the duration. But a good editor should be concerned with the poor storage efficiency of this shot. What you have is an hour of footage at about 13 GB that makes up only 15 seconds of your video. If you want to backup this project to DVD or another storage medium, you’ll end up wasting quite a bit of storage space for this particular time-lapse shot. That could be a big headache down the road. Here’s the trick to getting that lovely time-lapse shot without all the unneeded data. First, open a new video project and import the hour-long clip. Adjust the playback speed or duration so that it’s just the way you want it to play back. Then, export the video to the native file format you’re working with on the main project. This exported file will only include the frames needed to make the time lapse video happen, greatly reducing the file size. Finally, import this newly created video file into your main project file. Dump the old time-lapse clip that uses the entire hour-long clip from your project. When you’re finished with the project, you can delete the hour-long clip without destroying your project. And you’ll save yourself a bunch of storage space when you backup your work. Just make sure to not throw away the source footage. Clearly label the tape where it came from, just in case you ever have to recapture it.
Time-lapse video is a great way to show life’s big movements without requiring your audience to stay tuned in for hours and hours. When used properly it can be an eye opening experience that reveals a great deal of information about time, setting and character. Always make sure to have a game plan for these shots. It can be difficult to predict what will be part of the image either 30 minutes or 30 hours after you’ve pressed the record button. Happy shooting!