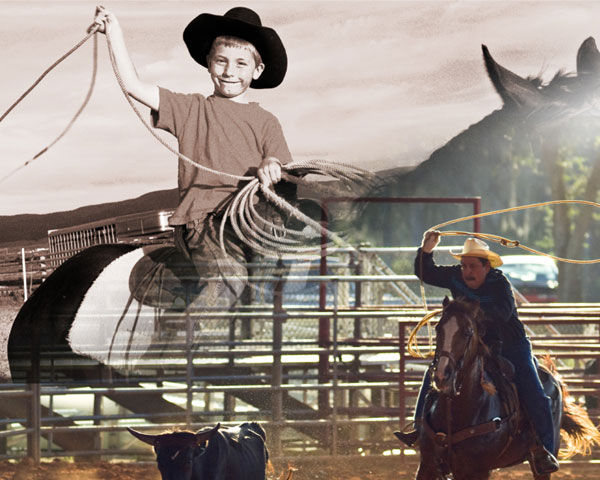 Giving your audience a glimpse into your character’s past tells them something about who he is today, and why. A gangster may have lived a dreary life as a street urchin, abandoned by the adults he trusted, left to stealing food to survive. Or a child who once dreamed of being a cowboy finds his modern technology-filled world isn’t what he planned, but he somehow finally gets the chance to shuck the briefcase and rat race to ride the great plains.

By creating the dream sequence you can tell a lot without having to make a longer, drawn-out story and you can flesh-out your subject’s character from a two to a three-dimensional persona. You are giving your story what they call in Hollywood, “discovery”. You fill in some of the blanks in the storyline.

Dream sequences can be achieved with just a little bit of work, or they can be very intense effect sequences requiring a whole team of CGI artists. Luckily for us, we can explore some common special effect techniques and learn how to make this effect work well.

First of all, you’re going to lead into this sequence with something happening in the present. So you have a choice to go one of two routes to the dream sequence. Few films take a very dry approach to the transition between present and a dream by doing a simple cut-only transition. This technique has a greater chance of confusing the audience as it may not be entirely obvious that the following scene takes place in the past. Filmmakers will often take advantage of this confusion when the experience of the film is supposed to be mysterious or misleading. But at some point, the viewer will start to piece it together. Another option, which is more common, is to use a cross dissolve transition to imply the passage of time. One scene dissolves into the other scene and the viewer is aware that there’s a time change, although they won’t know exactly whether or not we’re moving back in time or forward. 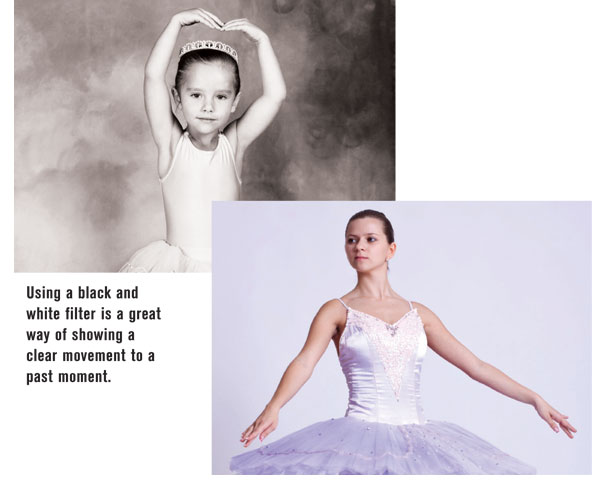 You don’t always have to use a cross dissolve to imply a passage of time. Editors have gotten more creative with their techniques and use sound effects to relay the same idea to the audience. The TV Show Lost is a terrific example of the “whoosh” sound effect. This is used throughout the series to move forward and backward in time (and the whoosh is used for parallel storylines, too). A quick Google search for “woosh sound effect” will turn up a variety of options, including some royalty-free whooshes. What can be better than that?

When using a whoosh sound effect, it can work really well if you match it with a visual cue as well. For example, you have a character in present time walking through a restaurant. A waiter crosses before the camera, blocking the view momentarily. As the woosh sound effect starts, the waiter’s movement across the camera match nicely. Now the waiter clears the camera and we’re in the past, no longer at the restaurant but at a school yard with our character.

It’s important that you choose this transition wisely. If your viewers absolutely need to be aware that the time has changed, then be a little more deliberate with your effects. It would be rather convincing to use the cross-dissolve with the woosh (if not too distracting for some). Meanwhile, if you’re telling a mysterious story and you don’t want your audience to know just exactly the importance of this dream sequence, a dry, simple cut will do. Whatever you do, make sure to remember that typically the same effect is used again to move the story back to present time. Make sure to plan for that.

With the transition out of the way, we can get into the fun parts. First, we’ll build the look that will imply the past. This is ideal for flashbacks. The same storytelling principle applies here as well. If you want to leave your audience in suspense, perhaps doing less is more. But, we’ll assume that we need to do our best to imply that we have moved to a scene that takes place in the past.

One easy and sure way to communicate to the audience that a scene is taking place in the past is to use a black and white filter. Moving from a color image to a black and white image is considered a clear movement to the past. Many video-editing applications have these filters built into the effects folder. It can be as simple as dragging and dropping the filter on top of each shot that takes place in the past.

If you don’t have a specific black and white filter, you can build your own if you have a few adjustments handy, like color saturation or color levels. By applying a color level filter or color saturation filter to a clip, you can drop the color information out of the clip, thereby making it black and white only. That’s a handy little tip if you don’t have this effect.

Black and white video is not always ideal for your story. In some cases you’ll want to still imply the past without losing all that wonderful color information. For that, we’ll turn to some effects that are also commonly used for dream sequences.

Vignette: A Window to Your Dreams

In video imaging terms, a vignette is the area around the border of the image that has a slightly altered appearance from the imagery in the center. Most modern cameras don’t have the same imaging problems that produced the vignettes in the early days of photography and filmmaking (although, you’ll see it from time to time when filmmakers use ultra wide-angle lenses). We’ll purposefully put a vignette back into the image to introduce a slight blur to the image around the border. In this way the action taking place in the center of the image will be sharp and it will gradually get fuzzy as we get to the outer edges of the frame. Not all editing software suites will be equipped to handle this effect. Most professional tools will be able to do the job. And, in some cases you might find that your video editing software has its own Vignette filter. In that case, just drag and drop it onto your video clip. For the rest of us, we can use a simple technique with a garbage matte and a gaussian blur effect. 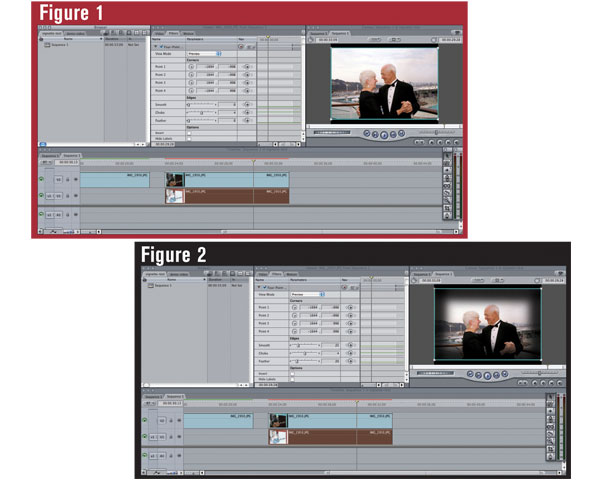 Some editing software packages (usually the more advanced) come equipped with a garbage matte filter. We’re going to use this to define the center part of the image where the picture is sharp. First, let’s get the timeline set up. You’ll need to have two duplicate clips (See fig. 1), one on top of the other to pull off this effect. Now turn off the bottom video track for now. In the top clip, drop a four-point garbage matte onto the clip. Each point by default will be at the edges of the image. We’ll drag each of them equally closer to the center. (See fig. 2) For this example I moved each point roughly 300 pixels in each axis toward the center for this 1920 by 1080 image. What you’ll see now is that the edges of this image have been cut out (if the bottom clip visibility is turned off). This gives us our basic shape, but now we need to round the corners to make it look more like the classic vignette shape. We’ll pump up the smooth control to 25 and now the corners of our matte are rounded. But, you’ll notice that the edges are sharp. What would be ideal is if the image gradually falls off into a blurred image. For that, we’ll increase the Feather property to 25. Now we have a rounded matte that gradually falls out into a transparency. 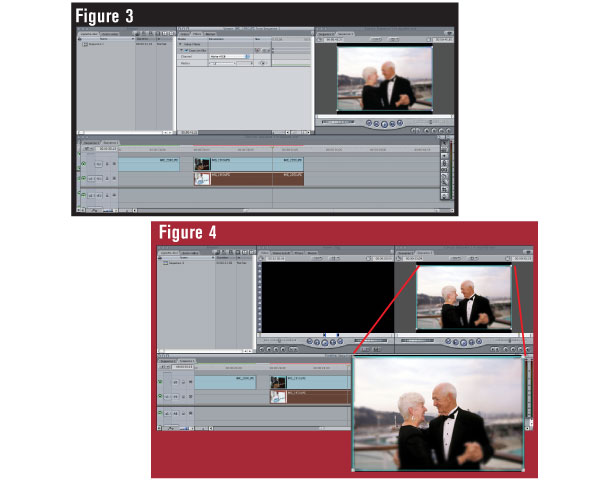 Let’s get the video track underneath this one turned back on again. Instantly, you’ll see the complete picture again. Now drag and drop a Gaussian Blur filter on top of the bottom clip. (See fig. 3) Set the blur to 8 and viol! (See fig. 4) You have a blurry vignette image. Of course, you’ll need to duplicate this effect for each and every clip in the dream sequence. Many applications allow you to simple drag and drop the existing effects on top of new clips in order to quickly duplicate the effect across multiple clips. That should save some time. Be prepared when exporting, however, as these effects can take a while to process. I would not recommend using this effect for long durations.

It can be quite simple to create visual effects with a clear purpose using these commonplace filters. The trick to making them work is to know what their purpose is and matching them with the appropriate aural and visual cues. Does this sequence call for a woosh? Or maybe something more subtle, like a piano that’s slightly out of tune? Have a plan in place to make sure you can pull off the illusion without jarring the audience and bringing them back to their reality. 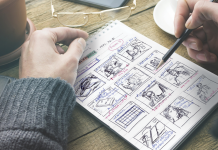 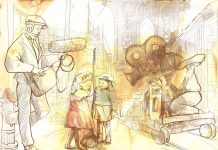