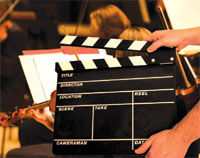 To determine whether or not you need to use multicam editing features, there are some considerations worth making.

Many professional video editing applications have built-in multicam editing functions. At its core, any multi-layer video editing application can edit multicam footage; however, it’s typically cumbersome to do so without more advanced feature sets. Even with the best tools, it can be tricky, so it’s important that you do the setup correctly. The best way to do that is to have a plan to sync all your camcorders.

Multicam editing is not for everyone. Having more than one camcorder at a shoot does not justify multicam editing. There are many reasons that a two-camera shoot will be a classic A/B edit, rather than a full-blown multicam production.

Your first consideration is what the B camera is doing. If your B camera is simply shooting some cutaways for safety, a classic A/B edit will suffice. Also, if the B camera is not rolling continuously, that’s another sign that multicam video editing is unnecessary. Multicam editing is best when both camcorders are running continuously, and you accurately synchronize the action unfolding before the cameras. Typical situations requiring multicam editing are live events, such as concerts, recitals, plays and other live performances. Multicam editing is very similar to live editing, although it’s not truly live, as you have the flexibility to stop time whenever needed. That said, a multicam edit will be a much easier edit if you treat it as if it were truly live.

When you are planning on a multicam edit, consider putting a great deal of concentration in the setup of the shoot. Ideally, a technical director will coordinate camera operation with your camera operators, or the camera operators will shoot the footage in a way that will allow every frame to be useable in the final production. The worst-case scenario in a simple multicam edit (e.g., a two-camera edit) is that both cameras have unusable footage at a particular time during a live performance. This type of challenge slows down the edit tremendously. So, make sure that you shoot with a plan before the multicam edit.

The last shooting consideration will also save the multicam editor a great deal of time. Always plant a sync point at the beginning of the shoot by using a clapboard or another mechanism, so that the editor can quickly and accurately match the timing on both camera sources. A clapboard is the ideal tool, as it’s both a visual and aural cue for the editor. The technique is rather simple, and you can do it in a matter of seconds. Someone holds the clapboard in front of the two cameras, typically near where the talent will be. Both cameras should start rolling tape and have a view of the clapboard in the camera. The person holding the clapboard will typically say “Mark” and then clap the arm down on the clapboard. Done. The shot has been marked, and the cameras will now continue to roll tape constantly until the performance has ended or the tape has run out.

In the edit bay, the editor will use the clapboard as a sync point. The editor lines up both the visual cue of the clapboard arm closing shut and the audio spike of the snap sound of the clapboard between camera A and camera B. If you do it properly, you will have both cameras accurately synchronized.

If you don’t have a clapboard, you can use the production assistant’s arms. Have the assistant hold out his arms, mimicking a clapboard, and slap closed the top hand to the bottom hand. This will also give a visual cue and a nice clap sound, which will be just as useful to the editor.

A challenge to this camera-sync technique is the venue. In many cases, you might be shooting in a crowded and loud auditorium where both camcorders will not record the clapping of a hand or clapboard. This problem is preventable if you plan on how your camcorders are acquiring sound. If camera A is using house sound and camera B is simply recording from the onboard mic, you can move camera B very close to the clapboard for the sync. In this way, you can mark the shot near a microphone so that camera A records the clap through house sound and, with camera B nearby, both should register the audio spike from the clapboard. Depending on your situation, you can use a variety of visual and audio cues, some of which may occur naturally (e.g., a sound technician testing the microphone before the event, or the sweeping second hand on a classroom clock), or you may add some for your editor’s convenience.

Each video-editing application has a different method for activating the multicam editing feature, but, in each application, the editor must prepare the clips with every frame synchronized. Until one of the video software teams creates a tool that automatically syncs our footage, we’re stuck with doing all the tweaks ourselves.

As the editor, your first task in doing a seamless multicam edit is to sync all the cameras. If you’re lucky, the footage will have a clear sync point as we just discussed. The goal at this point is to do a little maintenance on each video clip so that you have every clip perfectly synchronized.

The captured footage will rarely ever be naturally synchronized. So, put camera A and camera B video clips on separate video layers on the timeline. Take a look at the audio layers and see if you can identify the waveform spike from the clapboard. Also view the footage to find the clapboard. You can toggle each layer on and off so you can see the clips on lower video layers as well. Once you’ve found the clapboard cue, you’ll need to move one clip forward or backward to match the audio spikes in a single frame. Once you get these points close, play back a few seconds of the recorded performance. If it’s close but not precise, the audio will sound doubled (i.e., like an echo). At this point, you’ll want to magnify the timeline around the area of the clapboard audio spike and then nudge the clips frame by frame. Test the results again by playing back part of the recorded performance. If it’s frame-accurate, the audio will sound like a single source of audio. Otherwise, continue to nudge the clips so that the spike occurs on the same frame. This takes a little bit of patience as you move from nudge to testing, over and over again.

Once you have all your clips synchronized, you’ll trim the excess footage away, so that each clip starts at the same point. Now your clips are synchronized and trimmed to the starting point of your edit. From here, each video-editing application will require a different set of commands to start the multicam edit. Some applications require you to move each of these clips into a separate sequence, and others require a couple of clicks on the timeline. Either way, the most important part of the setup is complete.

Once the synchronizing is finished, multicam editing can be a timesaver, especially when you’re editing long performances with many different viewing angles. For the advanced multicam editor who is doing a great many live performances, consider using cameras that have timecode jam-sync capabilities. This nifty feature allows every camera to run on the same timecode, so that synchronizing footage can happen in a much more logical fashion. It’s so much easier, but this type of camcorder is generally much more expensive. For the rest of us, plan ahead and coordinate your shoot with precision.