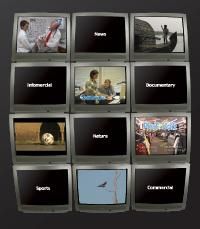 Cable TV has channels called "Nature," "Home and Garden" and "History" because viewers naturally classify the programs they want to watch. In the same way, clients for weddings, training aids, commercials and other professional videos instinctively know what’s in the type of program they’re paying for.

Here, we’ll survey a dozen or so of the most common video genres. For convenience, we’ll group them by objective, and by what you want to achieve with them. Is your main goal to inform, to instruct, to persuade, to preserve or to entertain? Whatever it is, have we got just the genre for you!

Cable TV groans under the weight of programs that inform viewers with news, features and documentaries. News is the most obvious informational genre because its objective is to deliver a brief, organized impression of something that’s recently happened. If the happening was visual ("Fire guts historic state house"), the news story presents it graphically, with support from a reporter’s offscreen comments. If the news is not visual ("State house committee releases budget"), then a reporter, committee chair or other spokesperson typically delivers the information verbally, while the images are mere talking heads and "wallpaper.

A close relative of news is the feature an equally brief vignette that either comments on the news ("How politics affects budget-making") or presents information that’s more interesting than important ("Tenth-grade class observes budget committee hearings"). News departments are often accused of confusing the news and features genres, usually on purpose.

A documentary is an informational genre of considerable scope anywhere from ten minutes to several hours that delivers an in-depth examination of its subject. As a genre, the documentary is different from a news feature, because its greater length requires rigorous subject organization and considerable skill in keeping viewers aware of what they’ve covered, where they are at the moment, and where they are going in the rest of the program. Cable channels are full of documentaries on history, biography, sociology, art, science, nature and you name it.

Brilliant videography often distinguishes science and nature programs, shaped and sequenced so well in the edit bay that little or no verbal commentary is necessary. Historical and biographical shows present a different set of challenges because there is often little or no film or tape available for use. Look at Ken Burns’ epics on the Civil War or Mark Twain to see how little original live action footage is included.

To fill the screen, these documentaries often rely on rostrum camera techniques (see Video Magic on the Rostrum and Tabletop, July 2001). The rostrum camera moves around still graphics, framing expressive details, zooming in for emphasis, and dissolving from image to image to keep things moving. Rostrum cameras can produce wallpaper when required, but usually deliver relevant and sometimes even powerful images.

A related instructional genre is the classroom demonstration. It differs from a hard-core training video in that it often covers a process from beginning to end in real time. Some demonstration videos, such as cooking shows, even compress time. They can show a chef shoving a pan in the oven to bake for 45 minutes and then dissolve to a shot of the fully baked masterpiece as it is removed from the oven.

Lectures, or at least informal running commentaries, usually accompany demonstrations. But the lecture by itself is an instructional genre. In this talking-head-to-end-all-talking-heads, the only good reason for making a video at all is to convey the personality of the speaker and the enrichment of his facial and body language.

The Powers of Persuasion

We’re all buried in videos intended to persuade: genres like commercials, infomercials and longer programs that seem like documentaries until you realize that their purpose is to convert you to their side. (I like to call these programs "documercials.")

Most persuasive programs push a product ("Drive a dream with your Belchfire sedan"), some hawk an idea or position ("Ballot Measure 3, to protect precious freedom"), and yet others hustle a living product called a politician ("Senator Feedbag cares!"). All of these subject types present commercial, infomercial and documercial genres. The distinguishing features of the commercial genre are brevity, graphic sophistication and pizzazz. Commercials are rarely longer than 60 seconds and some are as short as five. That means each shot must be dense with information, yet also easy to decipher very quickly.

Commercials are the opposite of news and documentary genres because they deliver so much of their impact visually (try watching them with the sound off to see how much of the message still comes through). There’s no room in commercials for talking heads and wallpaper.

To compete with the rival spots surrounding them, commercials are filled with eye candy: multi-layer digital graphics, gee-whiz 3D transitions and lightning edits. To quantify this rapid cutting, tape some commercials, count the shots, and divide the totals the running lengths of the spots.

Infomercials are commercials expanded to as long as 25 minutes by segments showing how to use the advertised product. Typically, you might begin with a straight commercial pitch for the "combination hookah and coffee maker also makes julienne fries." Then the three main sections of the program demonstrate each product function, divided by more commercials and wrapped up with a final pitch. In theory, there’s nothing wrong with presenting information surrounded by appeals to buy, except that the "info" part of an infomercial is rarely impartial and is often very misleading.

Even worse is the documercial genre. Its purpose is the same as an infomercial’s, but its structure is quite different. In a documercial, the overt commercial interludes are omitted so that the program resembles a non-biased documentary. Of course, the content is anything but neutral. Instead of an even-handed review of Senator Feedbag’s voting record and campaign contributors, you get a lot of shots of his lovely family and his noble profile gazing steadily toward a future made brighter by his reelection.

Preserving It on Tape

A more benign role of video is simple documentation: preserving information on tape that might otherwise be lost. Curatorial video differs from its informational and instructional cousins because its first mission is not communicating or training, but capturing and saving. Video can preserve people, events and information.

Ever wished you had tape of your grandma to show to your own grandchildren, or a video tour of the house you grew up in? Now that digital video promises immortality, family events like vacations and holidays are more attractive candidates for preservation on tape. Drama, dance and music performances can be archived. You can save games and other sports activities for nostalgic review years after the athletes have retired. This video genre achieves perhaps its most satisfying form in the oral history interview.

Videos of record differ from straight documentaries because they tend to be loosely edited. When the purpose is to preserve Mary’s last and greatest soccer game, there’s no point in just showing the highlights.

Simple visual recordings also serve more humble purposes, like legal depositions and home inventories. Even simpler are process records. Dismantling that old outboard motor? Set a camcorder on a tripod with a clear view of the worktable and record the disassembly and distribution of parts. Later, you’ll have a reference to help you put things together in the right order and with no embarrassing widgets left over.

Let Me Entertain You

The genre of story videos is so well-known that it hardly needs defining. Every movie, dramatic show or sitcom is a story program. This form of entertainment is so pervasive that we can forget that there are others–take music videos, for example.

Videos in what you might call the "MTV genre" are short (like the songs they visualize). Unlike most other genres, music videos have absolutely no limits on content. Some are stories, others illustrate the song lyrics, still others are independent visual poems suggested, or simply inspired, by the music. Many pretend to document the performance of the music by using playback/lip-synch production techniques. Some rely so heavily on digital effects that they test editing systems to the max.

In a music video, the audio dominates the visual elements because, of course, the music is the reason for the program. In a related genre, however, the montage of images prevails over the sound, or at least, shares the viewer’s attention equally. This highly personal, often poetic video genre doesn’t have a widely recognized name because it isn’t common. Programmers don’t know which channel to run it on; rental stores don’t know where to shelve it.

To experience this personal video form at its most mind-boggling, find a copy of Koyaanisqatsi, an 87-minute program by Godfrey Reggio released in 1982. The movie is an almost indescribable visual meditation on mankind’s abuse of our planet, set to an insistent, hypnotic score by Philip Glass. Despite its gloomy observations, the program somehow feels oddly exhilarating.

Koyaanisqatsi also demonstrates that most good videos belong in more than one genre at a time. It’s a tour de force of cinematography, a music video that’s inseparable from its almost frame-by-frame score and a documercial that powerfully persuades us to environmental responsibility.

And so, having started by defending the importance of video classification, we conclude with a program that refuses to be classified. Nonetheless, if this short ramble through the major video genres prompts you to try a new one for your next project, then our survey’s done its job.